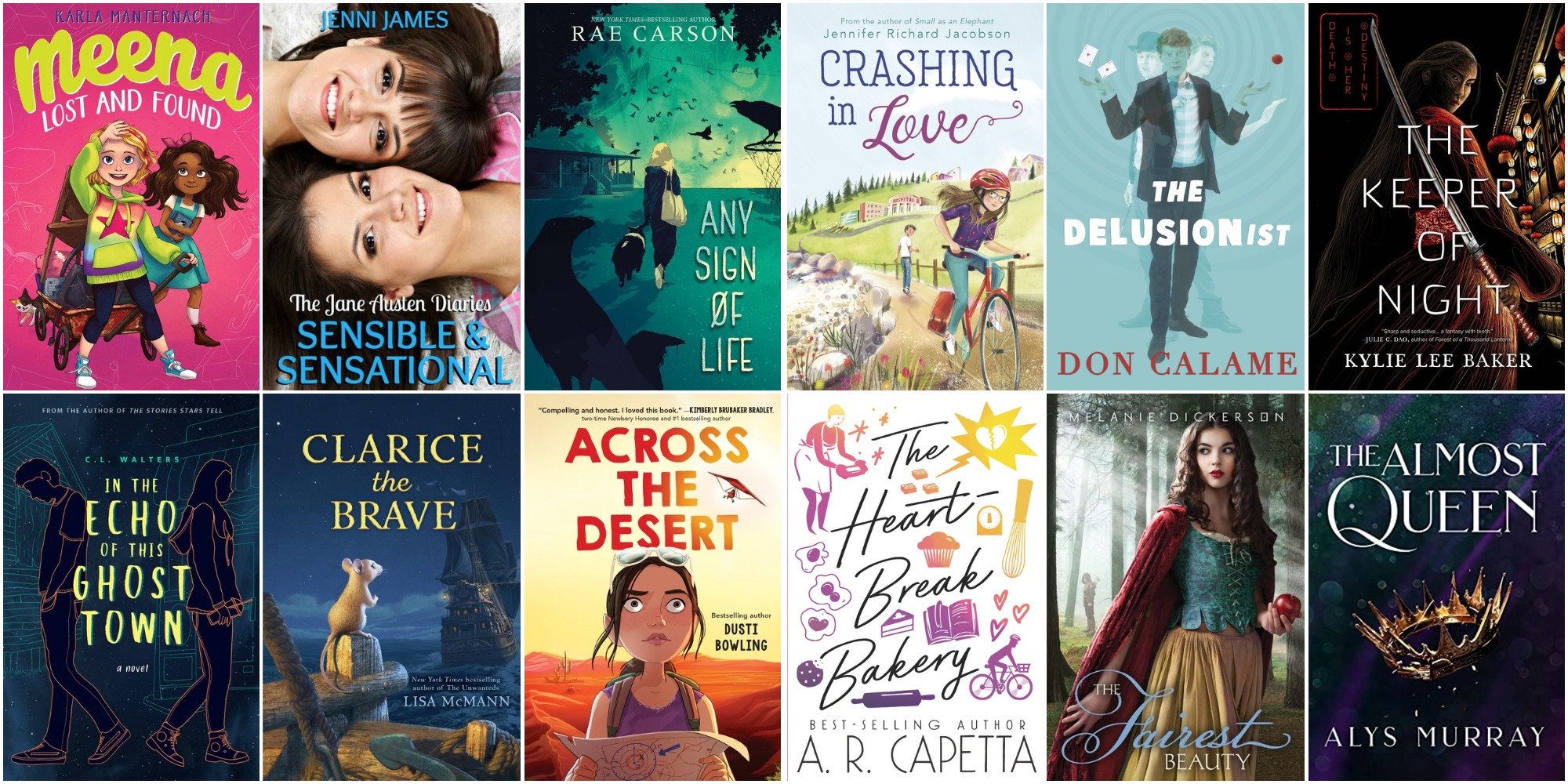 Across the Desert by Dusti Bowling

One girl sets out on a journey across the treacherous Arizona desert to rescue a young pilot stranded after a plane crash in this gripping story of friendship, courage, and rescue, from bestselling and award-winning author Dusti Bowling Twelve-year-old Jolene spends every day she can at the library watching her favorite livestream: The Desert Aviator, where twelve-year-old “Addie Earhart” shares her adventures flying an ultralight plane over the desert.

“Any Sign of Life is a heartbreaking story filled with courage, friendship, and personality. Paige Miller is the perfect team-up buddy in an apocalypse. I was with her when she lost everything, and stood right next to her when she took it all back.”—Wesley Chu, #1 New York Times–bestselling author of the War Arts Saga When a teenage girl thinks she may be the only person left alive in her town—maybe in the whole world—she must rely on hope, trust, and her own resilience.

Clarice the Brave by Lisa McMann

New York Times bestselling author of The Unwanteds brings us an epic animal adventure story perfect for fans of Pax and A Wolf Called Wander. The only good cat is a fed cat. Clarice, a young ship mouse, knows this to be true. She and her brother, Charles Sebastian, were taught to be careful—as all mice are—but caution is no match for the sea, which took their mother, and it is certainly no match for Special Lady, the horrid cat who ate their sister.

When Peyton comes across the victim of a hit-and-run, she knows it’s destiny. But what exactly does fate have in store for her and the boy in the coma? Since her parents divorced, twelve-year-old Peyton has known that to achieve happier outcomes in her life, she’s got to focus on eliminating her flaws—and on making sure her first boyfriend is truly right for her.

In the Echo of this Ghost Town by C.L. Walters

After getting in a fight with his best friends from high school-his bros-shortly after graduation, Griffin Nichols is faced with a reality he’d never imagined. He’s alone. In his version of manhood, he figures he needs to stash his feelings and pack them away among the ruins like dusty remnants.

For graduates of Junie B. Jones, the third novel in the Meena Zee series follows lovable Meena, who must learn how to cope when her best friend, Sofia, moves away. Everything is going Meena’s way. Her seizures are under control, she’s started the Finders Keepers Club, and she’s trying hard to be a better friend.

Sensible and Sensational by Jenni James

Can a sensible girl learn to find her own kind of sensational? When Ellyn Dashwood’s family moves to Bloomfield, New Mexico, she’s not sure if she’ll fit in as easily as her wildly popular twin sister, Maralyn, will. Though they’re identical, the two sisters are exact opposites. Maralyn attracts people to her like bees to a hive.

Perfect for fans of One for the Murphys and Paper Things, this heart-wrenching middle grade debut tells a moving story about family, friendship, and the meaning of “home” when you don’t have a house of your own. Fifth grade can be tough for anyone.

The Almost Queen by Alys Murray

The Witch Needs Her Freedom. Ellara Wist, one of the many witches that fought on the losing side of the war, has no intentions of returning to Outerland when it is finished and she has no intention of letting her fellow witches suffer either. So, during her sentencing for war crimes against the kingdom of Aulen, she boldly offers their new king a proposal: she’ll join the king’s court as his own personal sorceress in exchange for the lives and freedom of those trapped in Outerland.

The Christmas Pig by J.K. Rowling

A heartwarming, page-turning adventure about one child’s love for his most treasured thing, and how far he will go to find it. A tale for the whole family to fall in love with, from one of the world’s greatest storytellers. One boy and his toy are about to change everything… Jack loves his childhood toy, Dur Pig. DP has always been there for him, through good and bad.

The Delusionist by Don Calame

Quinn’s illusions are as good as those in any Vegas act—but can he win a spot at a prestigious magic camp despite an upstaging partner, a cute rival, and a con-artist mentor? Fifteen-year-old Quinn Purcell wants only one thing: to win a coveted spot at the Masters of Magic Fantasy Camp. But the competition is stiff, including Dani Darling, an incredibly talented, and incredibly attractive, rival magician who prestidigitates her way into Quinn’s heart—unless that’s just another of her tricks.

The Fairest Beauty by Melanie Dickerson

Sophie has long wished to get away from her stepmother’s jealous anger, and believes escape is her only chance to be happy. Then a young man named Gabe arrives from Hagenheim Castle, claiming she is betrothed to his older brother, and everything twists upside down.

The Heartbreak Bakery by A.R. Capetta

Teenage baker Syd sends ripples of heartbreak through Austin’s queer community when a batch of post-being-dumped brownies turns out to be magical—and makes everyone who eats them break up. “What’s done is done.” Unless, of course, it was done by my brownies. Then it’s getting undone. Syd (no pronouns, please) has always dealt with big, hard-to-talk-about things by baking.

The Keeper of Night by Kylie Lee Baker

“Sharp and seductive…a fantasy with teeth.” —Julie C. Dao, author of Forest of a Thousand Lanterns A girl of two worlds, accepted by none… A half Reaper, half Shinigami soul collector seeks her destiny in this haunting and compulsively readable dark fantasy duology set in 1890s Japan. Death is her destiny. Half British Reaper, half Japanese Shinigami, Ren Scarborough has been collecting souls in the London streets for centuries.

Había una vez . . . There lived a girl named Petra Peña, who wanted nothing more than to be a storyteller, like her abuelita. But Petra’s world is ending. Earth has been destroyed by a comet, and only a few hundred scientists and their children – among them Petra and her family – have been chosen to journey to a new planet.

The Troubled Girls of Dragomir Academy by Anne Ursu

From the acclaimed author of The Real Boy and The Lost Girl comes a wondrous and provocative fantasy about a kingdom beset by monsters, a mysterious school, and a girl caught in between them. If no one notices Marya Lupu, is likely because of her brother, Luka.

The Violent Season by Sara Walters

The unputdownable debut thriller you will never forget: “Holy sh……. Can I just say that? Can that be the review? Technically yes, but I **NEED** to say that this is without a doubt and by far one of the best books I have read this year!”—Brittney Green, Netgalley Reviewer “A freaking INCREDIBLE debut for Sara Walters.

They Stay by Claire Fraise

For fans of Stranger Things comes a suspenseful YA supernatural mystery about a missing kid, a girl who can see ghosts, and a horrifying crime only four outcasts have the power to stop. PRAISE FOR THEY STAY: “Fraise successfully creates an atmosphere like a cold graveyard, and a heart-thundering story that will haunt you more than any ghost can.” — Briar Esterline, author of Ablem’s Sanctuary What if the only person who could help you find your missing brother was dead? Nothing is as important to sixteen-year-old Shiloh Oleson as her little brother Max.

Tonight We Rule the World by Zack Smedley

From the critically acclaimed author of Deposing Nathan comes an explosive examination of identity, voice, and the indelible ways our stories are rewritten by others. In the beginning, Owen’s story was blank . . . then he was befriended by Lily, the aspiring author who helped him find his voice. Together, the two have spent years navigating first love and amassing an inseparable friend group.

Violets Are Blue by Barbara Dee

From the author of the acclaimed My Life in the Fish Tank and Maybe He Just Likes You comes a moving and relatable middle grade novel about secrets, family, and the power of forgiveness. Twelve-year-old Wren loves makeup—special effect makeup, to be exact.