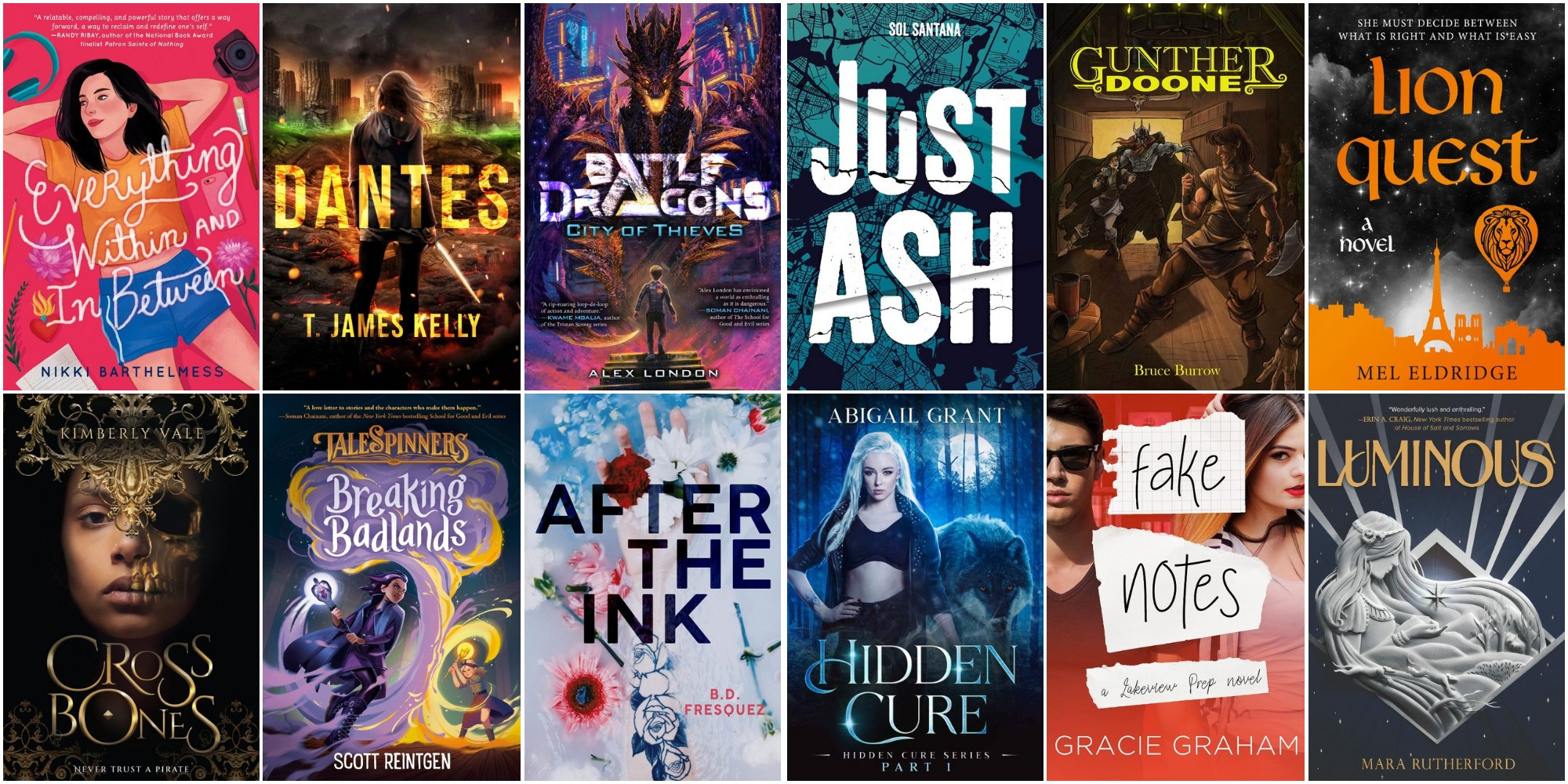 After the Ink by B.D. Fresquez

Betrayal races through Lacey’s head. Grieving over her parents’s death, she found solace in her aunt, her best friend Casey Taylor, and her boyfriend of three years, Jacob.

Video game fans and book lovers alike will be swept into an undercover mission that might destroy the balance between good and evil forever in the latest Talespinners adventure, perfect for readers of The Land of Stories.

City of Thieves by Alex London

In a modern mega-city built around dragons, one boy gets caught up in the world of underground dragon battles and a high-stakes gang war that could tear his family apart. Once, dragons nearly drove themselves to extinction. But in the city of Drakopolis, humans domesticated them centuries ago.

Never trust a pirate. The Blood Bell tolls, marking the death of the pirate king and the start of the Trials—a heart-stopping competition where the reward is the Bone Crown.

Hannah is betrayed. Adam is captured. Now, she must raze Hell to save him… It’s been nearly one year since Hannah faced the Dark Trials. All she desperately wants now is a normal life for herself and her sister. But for someone who can shift between worlds and slay the demons that haunt her small town, normal life was never in the cards.

Everything Within and In Between by Nikki Barthelmess

Color Me In meets I Am Not Your Perfect Mexican Daughter in Everything Within and In Between, a deeply honest coming-of-age story about reclaiming a heritage buried under assimilation, the bonds within families, and defining who you are for yourself.

Thorne Roberts is a Hollywood Adonis. America’s teen heartthrob. Just another raven-haired, sharp-jawed, entitled bad-boy celebrity with a pretty face. Everything I detest. So when he comes into my family’s place of business and makes demands, I shut him down.

Orphaned and naive young blacksmith, Gunther Doone, sets out alone on a journey from his isolated town of Wille to find out who killed his only uncle.

From Bestselling YA Fantasy Romance author Abigail Grant Maia I was finally done with high school, ready to escape being the weird girl with white hair and just feel normal.

Ashley “Ash” Bishop has always known who he is: a guy who loves soccer, has a crush on his friend Michelle, and is fascinated by the gruesome history of his hometown—Salem, Massachusetts.

Only she can decide between what is right and what is easy… In a different world, in a different universe, there stands an ancient prophecy which – if fulfilled – could change life as the Ribeons know it.

“Wonderfully lush and enthralling.” —Erin A. Craig, New York Times bestselling author of House of Salt and Sorrows From the author of Crown of Coral and Pearl comes an immersive new fantasy about a witch who must learn to harness her power—or risk losing her loved ones forever.

Running away is easy for twelve-year-old Sammy. It’s so easy, she can sneak out and back in without her mum knowing. But, this time, she’s running away for real. No-one in her family gets her at all! Mum just can’t see that her new boyfriend is no substitute for her dad, who passed away only a few years ago.

The City Beautiful by Aden Polydoros

“An achingly rendered exploration of queer desire, grief, and the inexorable scars of the past.” —Katy Rose Pool, author of There Will Come A Darkness Death lurks around every corner in this unforgettable Jewish historical fantasy about a city, a boy, and the shadows of the past that bind them both together.

The Cure by K.A. Rileyl

Before the Blight, becoming an adult was something teenagers looked forward to. But now, turning eighteen means certain death. Unless you prove yourself worthy of the Cure.

The Falling Girls by Hayley Krischer

Perfect for fans of Kathleen Glasgow and Nina LaCour comes another searing, affecting novel that follows one girl caught between two toxic worlds from the author of Something Happened to Ali Greenleaf.

The Feasting by Zahra M.

When she starts to see confetti everywhere she goes… …she begins to have an ominous feeling. Will she be ready to face the horror awaiting her? Sixteen-year-old Layla’s life is turned upside when she has to move in with strict Grandma Meelat after losing her father to mental illness.

The Girl Who Wasn’t by Cara Thurlbourn

A touching coming-of-age story about how far we’re willing to go to find a lasting friendship. Jeanette’s life currently revolves around caring for her agoraphobic and hoarder mother, all while dreaming of attending university for a musical theater course.

The Holiday Switch by Tif Marcelo

Vial of Tears by Cristin Bishara

Two sisters become trapped in the underworld—and in the machinations of deities, shapeshifters, and ghouls—in this lush and dangerous Phoenician mythology-inspired fantasy. Teenage sisters Samira and Rima aren’t exactly living the dream.