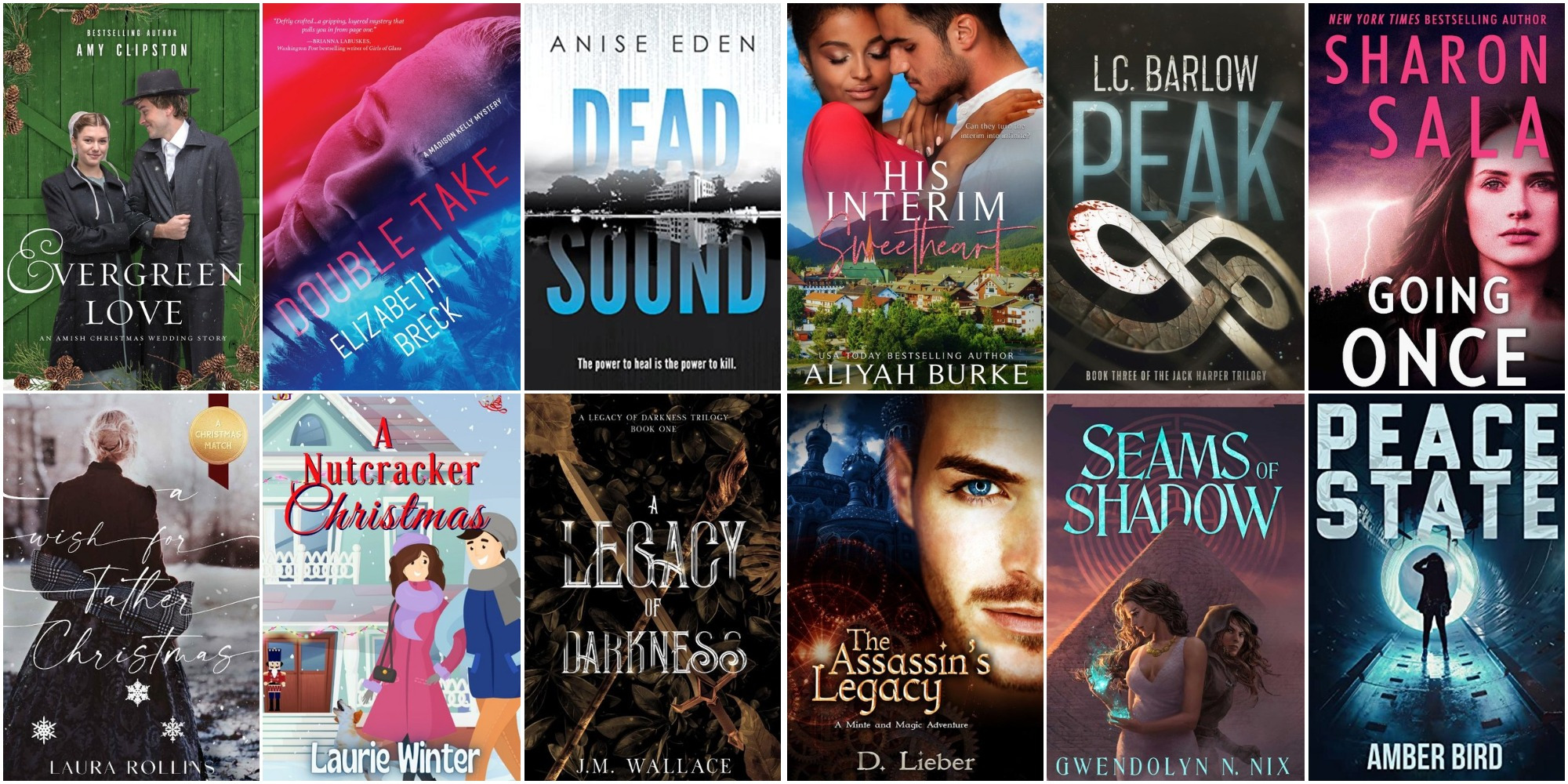 A Legacy of Darkness by J.M. Wallace

A reluctant King haunted by his father’s actions. A Druid girl haunted by her bloody childhood. And an impossible quest to save their country… Gripping and action-packed, A Legacy of Darkness is an adrenaline-filled, high fantasy of sword and sorcery, mythical creatures, and a charming cast of characters, perfect for fans of Cinda Williams Chima and Holly Black. Darkness spreads through the kingdom of Asterion.

A Nutcracker Christmas by Laurie Winter

Suddenly let go from her news anchor position, Aria Roberts heads north to stay at her late Great-Aunt Clara’s house. She has many good memories there and wishes to give Clara’s Christmas Shoppe, which is located on the first floor of the Victorian mansion, one final holiday season. When Aria arrives, she finds the special gift Clara left for her—an antique nutcracker with a poem hidden under the back lever.

A Wish for Father Christmas by Laura Rollins

Life has taught Lady Alice Nightingale she cannot trust a man. She would never even consider remarrying, if it wasn’t painfully clear that her son needs a father. With no male relative to help her see past the masks everyone wears among society, Alice chooses to embark on a most risky endeavor—she will be Lady Nightingale half the time, and Mr. Allen, her own cousin, the other half.

The tender scars on her abdomen throb as memories of the attack come rushing back, flooding her mind and sending her heart racing… Psychotherapist Neve Keane knew that returning to work at the hospital after being stabbed by a patient would be difficult.

When a young journalist goes missing in sunny San Diego , P.I. Madison Kelly learns the true price of knowing too much. It’s a perfect San Diego fall—cool and crisp with bright blue skies. But not everything is right in the sunny idyll dubbed “America’s Finest City.” Young journalist Barrett Brown has been missing for a week, and her boyfriend hires private investigator Madison Kelly to find her. Right away, Barrett reminds Madison of a younger version of herself: smart, ambitious, and a loner.

An Amish Christmas Wedding story from bestselling author Amy Clipston. Ryan Lapp had promised to marry Lorene Bontrager as soon as he was able to build them a house, but the day never came. Ryan moved away. Five years later, Lorene has settled into her single life and is shocked when her younger sister announces her quick engagement to Ryan’s younger brother. As they rush to plan the wedding, Lorene is constantly around the family she almost joined.

Going Once by Sharon Sala

From New York Times bestselling author Sharon Sala. A town reeling from disaster. A reignited passion. The long shadow of a killer. As raging floodwaters engulf her Louisiana hometown, Nola Landry is stranded on high ground, the unwitting witness to the brutal murder of three fellow survivors. Once she’s finally rescued in the aftermath of the storm, no one is willing to believe a story as horrific as hers—until three FBI agents arrive on the scene…one of whom Nola knows very well.

His Interim Sweetheart by Aliyah Burke

Can they turn the interim into infinite? Logan Chancellor needed to find an interim girlfriend to take home to his Grams’ one hundredth birthday party. It wouldn’t do to show up alone when his ex was going to be there. He didn’t trust the women he occasionally slept with but when his friend blurts it out that he has one, he has to make this work.

Kiss of Treason by Brandi Spencer

Previously published as A Seer’s Daughter by B. C. Marine. Two forbidden lovers share the rare gift to heal others with a kiss—but at a cost. Odelia’s life has been a lie. When the queen tries to remove her from the palace, Odelia uncovers the truth. Now she must decide whether to forsake her people or embrace a destiny that would pit her against the current heir to the throne…her best friend.

’Tis the season for celebrating when Gia Morelli’s holidays include both a wedding and yuletide festivities. Until someone naughty delivers a most unwanted Christmas gift—murder. . .

Out of the Blue by Nettie Anderson

Will escaping to Barley Ford, free Daisy Tremain from the pain of loss and abandonment? Daisy has established herself as a moderately successfully writer of fantasy fiction under her pen name Alex Dennison. Now she is struggling to complete the final book of her trilogy, The Rose Water Chronicles.

The eagerly anticipated conclusion to the Peaceforgers trilogy After all they’ve sacrificed and the lines they’ve crossed to keep the planet from becoming a literal dystopia, Katja and her surviving allies aren’t sure they—or the human race—will survive 2050.

First, she was an acolyte. Then, a rogue. Finally, a catalyst. Now she’s declaring war on Hell itself. Jack Harper can raise the dead, and those she resurrects she also controls. She belongs to an ancient race of magical beings called “ferrics,” though she is the first of her kind with this power.

Evil is the consequence of an individual’s own struggles against non-existence… Ancient monsters of destruction rise from emerging rifts that dot the landscape, pushing cities and the known civilization to their downfall.

Stabbed in the Tart by Carol E. Ayer

Home bakery owner and Highly Sensitive Person (HSP) Kayla Jeffries has been hired for the Gourmet and Stay Valentine’s Weekend at the historic Countryside Inn in Los Robles, CA. When one of her fellow cooks is murdered during dinner service, she becomes a person of interest-and a possible suspect.

The Assassin’s Legacy by D. Lieber

He hasn’t been Aleksandr Sergeyevich Volonov, legendary monster-hunting assassin for ten years. Now, he is only Sasha, charming deckhand on a merchant airship so recently destroyed by pirates. All he wants is to find another job and keep moving.

The Phoenix by Morgan Delaney

Science and superstition collide when a plague of rats coincides with the anniversary of a witch’s execution and the arrival of a colourful stranger. It’s summer, 19— and sleepy Hawkinge-By-Hythe (seven time winner of Great Britain’s Most Superstitious Town) is suddenly overrun by a plague of rats.

The Wild Dark by Katherine Silva

“Katherine Silva spins a unique apocalypse in her new novel The Wild Dark—a book that asks: What happens to humanity when the gates to the afterlife start to swing the wrong way? A darkly imaginative world combines with a story of love beyond death to keep the pages turning.” — Wendy N. Wagner, author of The Deer Kings and An Oath of Dogs Ghosts. Soul-eating wolves. World-consuming woods.

This Thing Between Us by Gus Moreno

“As original as it is affecting . . . left me genuinely creeped out, unsettled, and shaken. An existentially frightening book.” —Paul Tremblay, author of Survivor Song “Hold on, this isn’t a ride, it’s a slide, and it doesn’t care whether you’re ready or not.” —Stephen Graham Jones, author of The Only Good Indians A widower battles his grief, rage, and the mysterious evil inhabiting his home smart speaker, in this mesmerizing horror thriller from Gus Moreno. It was Vera’s idea to buy the Itza.

The love of your family should be unconditional. My lineage —a long line of MC presidents before me. My role —to live up to the expectations of those who filled the shoes I now wear. Through my self-doubt, the lights of Vegas shine a beacon of hope.