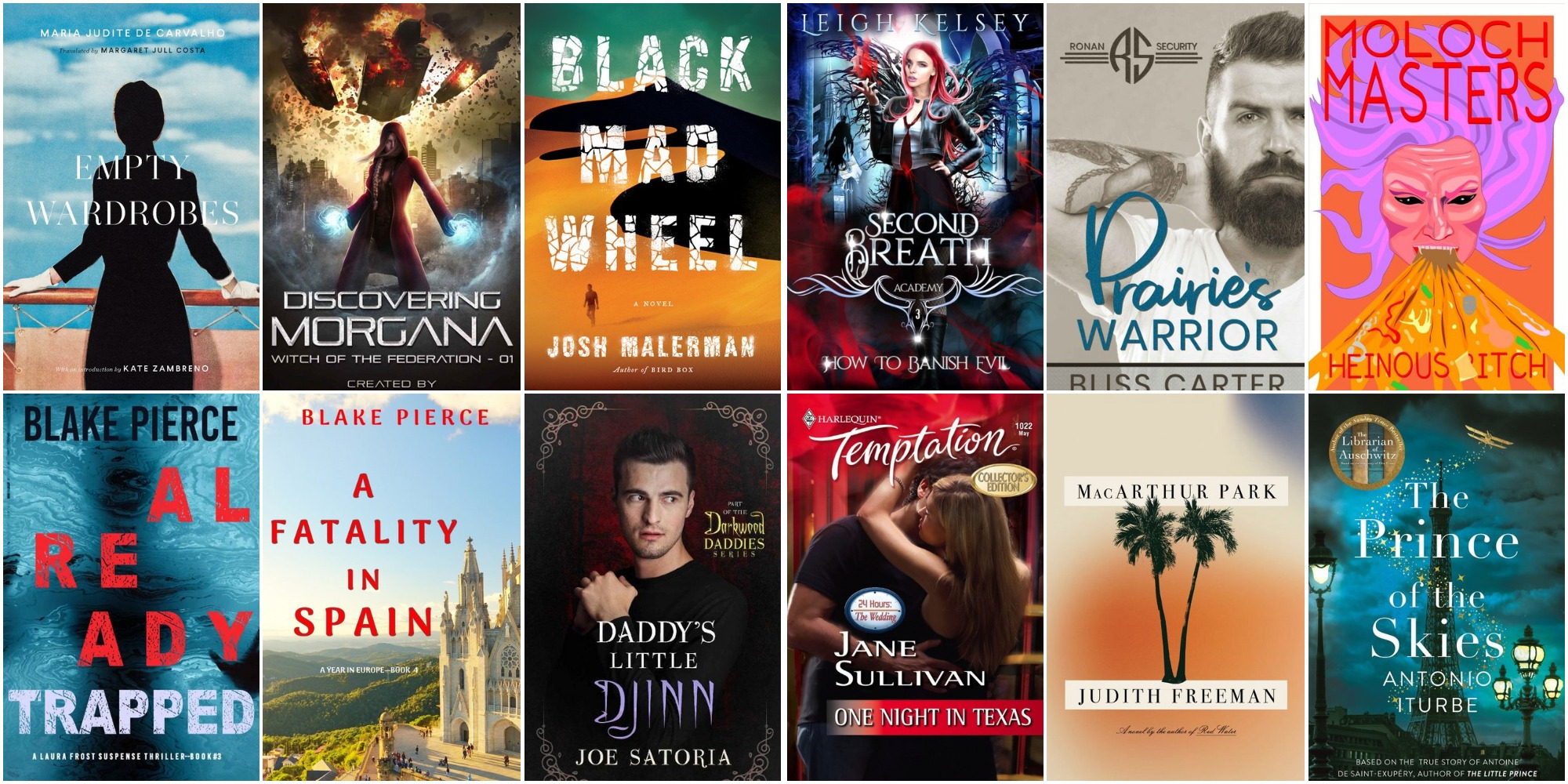 A Fatality in Spain by Blake Pierce

Diana Hope, 55, is still adjusting to her recent separation when she discovers her ex-husband has just proposed to a woman 30 years younger. Secretly hoping they would reunite, Diana is devastated.

25-year-old female twins turn up murdered, on the same day, in different parts of Minnesota. A coincidence? Or the work of a diabolical serial killer? Only FBI Special Agent (and psychic) Laura Frost may be able to know the difference. “A MASTERPIECE OF THRILLER AND MYSTERY.

From the author of the hit literary horror debut Bird Box (“Hitchcockian.” —USA Today) comes a chilling novel about a group of musicians conscripted by the US government to track down the source of a strange and debilitating sound The Danes—the band known as the “Darlings of Detroit”—are washed up and desperate for inspiration, eager to once again have a number one hit.

It took a tug, a rub, and… I was Daddy’s desire. Life had never been easy for Florian Kulberg, a 200-year-old vampire. He’d fallen in love far more times than he could count, and each week he thought he’d found the one. Leaving his mark on them in all the ways a good daddy should. He believed in soulmates.

The future has amazing technology. Our alien allies have magic. Together, we are building a training system to teach the best of humanity to go to the stars. Please Note: This book was previously published as part of the megabook Witch of the Federation.

For ten years Dora has ritualistically mourned her husband’s death, a pointless ritual that forced her to rely on support from old friends and acquaintances. Her beloved husband, a “Christ” so principled he rejected any ambition whatsoever as a construct of a corrupt society, succeeded only in leaving Dora and their daughter with nothing.

I wake in a world where zodiac signs are living, breathing men… with unbelievable powers. Sure, I’m a theoretical astrophysicist looking for interdimensional anomalies— but that doesn’t mean I want to go through one. Fate has other plans.

Aileen survives a vicious night. When she moves to a new town, she thinks it’s over. She becomes obsessed with seizing retribution. She isn’t the only person seeking revenge. The one person she isn’t concerned with; turns out to be her most formidable nemesis.

How To Banish Evil by Leigh Kelsey

The dark lady is back. Watched day and night by necromancer enforcers, Kati has no freedom, no magic, and no way to rescue Iain from his aunt. Lady LaVoire wants only one thing: power. And she’ll stop at nothing to get it. Even if it means draining all life from the man Kati loves.

A captivating, emotionally taut novel about the complexities of a friendship between two women—and how it shapes, and reshapes, both of their lives “Filled with gorgeous prose and deep emotion . . .

One Night in Texas by Jane Sullivan

All covert operative Derek Stone wanted was to get in and get out. The job was simple. Unfortunately, getting caught by Alyssa Ballard wasn’t part of the plan. Six months ago they’d had a week of wild, wonderful sex. Then he’d left without a trace. Derek’s undercover work allows him to get close to no one– though he can’t help wanting another under-the-covers experience with sexy Alyssa.

Ronan Security was created to secure the safety of women and children, regardless of their circumstances. Hiring only the best and most courageous of men and women, RS leaves nothing to chance in protecting the most vulnerable.

Quest for Fire by Hugo Hobbs

For reasons unknown an ancient elemental power known as the source of fire has forsaken its vow of peace. Once again it will meddle in the wars of light and darkness. The first magic user to link with this source will have the living embodiment of fire living inside them. A union of ancient power, and flesh.

The Penguin Book of Dragons by Scott G Bruce

Two thousand years of legend and lore about the menace and majesty of dragons, which have breathed fire into our imaginations from ancient Rome to Game of Thrones A Penguin Classic From classical antiquity to the dawn of the modern age, dragons have proved to be the most popular mythological creature in the human imagination, featuring prominently in heroic literature around the world.

The Prince of the Skies by Antonio Iturbe

A gripping narrative of friendship and exploration, and an homage to Antoine de Saint-Exupéry, an unforgettable writer who touched the lives of millions of readers, and who was able to see the world through the eyes of a child. In the 1920s, long before he wrote The Little Prince, Antoine de Saint-Exupéry was an accomplished pilot.

The Pulse by Roger Hayden

September 21, 2020: America is worse off than it has ever been economically, but the worst is yet to come. On a seemingly normal Monday morning, a power outage occurs across the entire state of Georgia. The sweeping blackout is unlike anything ever seen. But that’s not all. A massive breakdown of vehicles and communications follows, sending affected areas into chaos.

The Sound of Glass by Karen White

Retail The *New York Times bestselling author of A Long Time Gone* now explores a Southern family’s buried history, which will change the life of the woman who unearths it, secret by shattering secret.

The Unbearable Lightness of Being by Milan Kundera

In this novel – a story of irreconcilable loves and infidelities – Milan Kundera addresses himself to the nature of twentieth-century ‘Being’ In a world in which lives are shaped by irrevocable choices and by fortuitous events, a world in which everything occurs but once, existence seems to lose its substance, its weight.

Troupe of Shadows by Jennings Zabrinsky

Princess Sellane Tellameer was the heir to an empire. Once. Chased from her homeland by her traitorous brother, Sellane must find a way to survive in a harsh land populated by strange people. People who speak an odd language, and fight with guns rather than blades. People who wear shoes upon their feet.

Waiting for the Laird by Willa Blair

Widow Lara MacLaren hungers for the hunky architect she hires to restore her derelict Scottish manor, but is she ready for a relationship…and is Ian ready for her twins? Ian Paterson is eager to awaken Lara’s passionate side. Yet, if he reveals his ancestral claim to her estate, he risks losing her and his job.