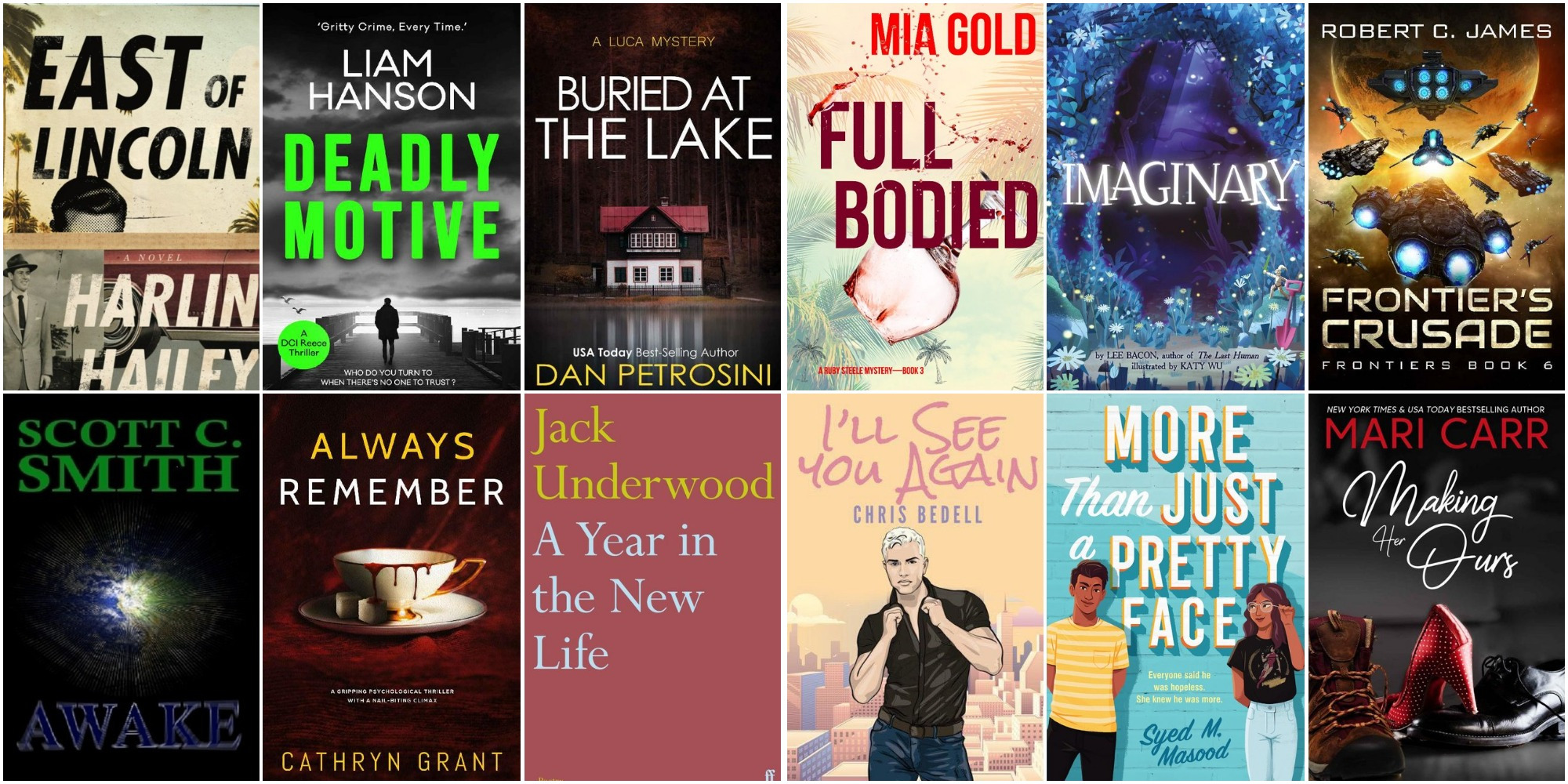 A Year in the New Life by Jack Underwood

Louise loves her family. To death. Kelly is married with two kids, enjoying an ordinary peaceful life – until she finds her father-in-law Frank dead in her backyard sauna.

Driven by grief and insomnia, Charles Matheson struggles with his day-to-day life, until one day he discovers a portal that takes him to another world, a world almost like our own.

Buried at the Lake by Dan Petrosini

The presumption was murder. Everyone assumed they knew the killer… …but what if they were wrong about the crime? It was the most beautiful house on the lake. When a girl’s remains are found on the property, Bill Miller seems to know something. For ten years, there had been whispers about what happened to the girl.

When DCI Brân Reece arrives at the bloody crime scene of a murdered woman, he has every right to believe the case is his. Reece is head of the regional murder squad. He’s also recently widowed and a volatile risk-taker in the eyes of his superiors.

East of Lincoln by Harlin Hailey

The year is 2012, the autumn of our discontent. It has been four years since the Great Recession, but anger and heartbreak linger. Against the moneyed backdrop of coastal Los Angeles, a motley crew of unemployed characters is brought together by self-loathing, boredom and defeat.

The Kalceni are gone. But will their demise mean the galaxy’s end? Beyond the gateway, Jason Cassidy and the crew of the Cargo Ship Argo have enjoyed a freedom experienced by only a select few.

FULL BODIED is book #3 in the Ruby Steele Mystery, which begins with ON THE ROCKS (Book #1).Ruby Steele, 30, beautiful, fit, seems just like any other ex-pat hiding out in the Bahamas and playing local bartender. But unruly patrons find out the hard way: Ruby is a mixed-martial-arts pro, and not one you’d want to cross.Ruby’s known for making friend in bad places.

It’s the start of his senior year, and Cyrus should be worried about college applications, procrastinating on homework, and staying up past his bedtime. And he does, until his mother’s cancer returns.

The story of a boy and his imaginary friend—told by the imaginary friend Zach should’ve outgrown his imaginary friend by now. He knows this. He’s 11, long past the days when kids are supposed to go on epic make-believe adventures with their invisible friends. But after the death of his father five years ago, all Zach wanted was an escape from the real world.

A stunning novel on love, loss, identity, and redemption, from Publishers Weekly Flying Start author Brandy Colbert When Suzette comes home to Los Angeles from her boarding school in New England, she isn’t sure if she’ll ever want to go back.

Making Her Ours by Mari Carr

For the first time, you can own five of Mari Carr’s hottest menage romances in one steamy anthology. Set includes Waiting for Her, Sweet Thursday, Reach You, Full Position, and Everything Nice. This anthology is a must-have for fans of menage and an amazing way to “test drive” five of Mari Carr’s most popular series, including Wild Irish, Sparks in Texas, Second Chances and Big Easy.

More Than Just a Pretty Face by Syed M. Masood

For fans of Becky Albertalli and Jenny Han, a sweetly funny YA debut about falling in love, family expectations, and being a Renaissance Man. Danyal Jilani doesn’t lack confidence.

The BEST of Penny Wylder in one bingeable and yummy collection! My mega-crush is a single dad. A very, VERY hot single dad. Does he want more than a fling? Or are second chances meant for fairy tales? Contains Basket Stuffer, The Single Dad Arrangement, Falling for the Babysitter

Coincidence or fate? Either way, there will be no second guesses… Louis wants what his parents had: all encompassing love. He never believed he’d find it until a chance meeting with a man in his childhood vacation spot. Unfortunately, a brief encounter is all they have before Mal disappears.

I struck gold on my land. An overnight millionaire with a criminal record, a bad attitude, and a motorcycle club to run. Even with all that, I think I have my life under control. But then I see her.

The Raven Thief by Ashley Olivier

One sword with the power to decide fates. Known as the Raven, Enya has a reputation for getting things done no matter the cost. Which is exactly why brothers Rowan, Beacon, and Niall hire her to help them retrieve a legendary sword.

Master spy, Nazi hunter—and werewolf on the prowl—in occupied Paris: A classic of dark fantasy from a Bram Stoker Award—winning author. Allied Intelligence has been warned: A Nazi strategy designed to thwart the D-Day invasion is underway.

Tide of Tricks by Ariana Nash

A darkness runs deep beneath London… Reeling from recent revelations and forced to lie for Kempthorne, the unthinkable happens: Dom fails the latent competency test.

Who Shall Live by Carolyn Geduld

Four-year-old Eva is abducted by her grandmother from a Jewish Community in Indiana and raised in the forest. As an adult, she becomes “First Woman,” leader of the Woodland Cooperative, a haven for those escaping the pandemic—including the handsome schemer, Larry. Eva betrays her community when the Cooperative is overwhelmed by invading townspeople.