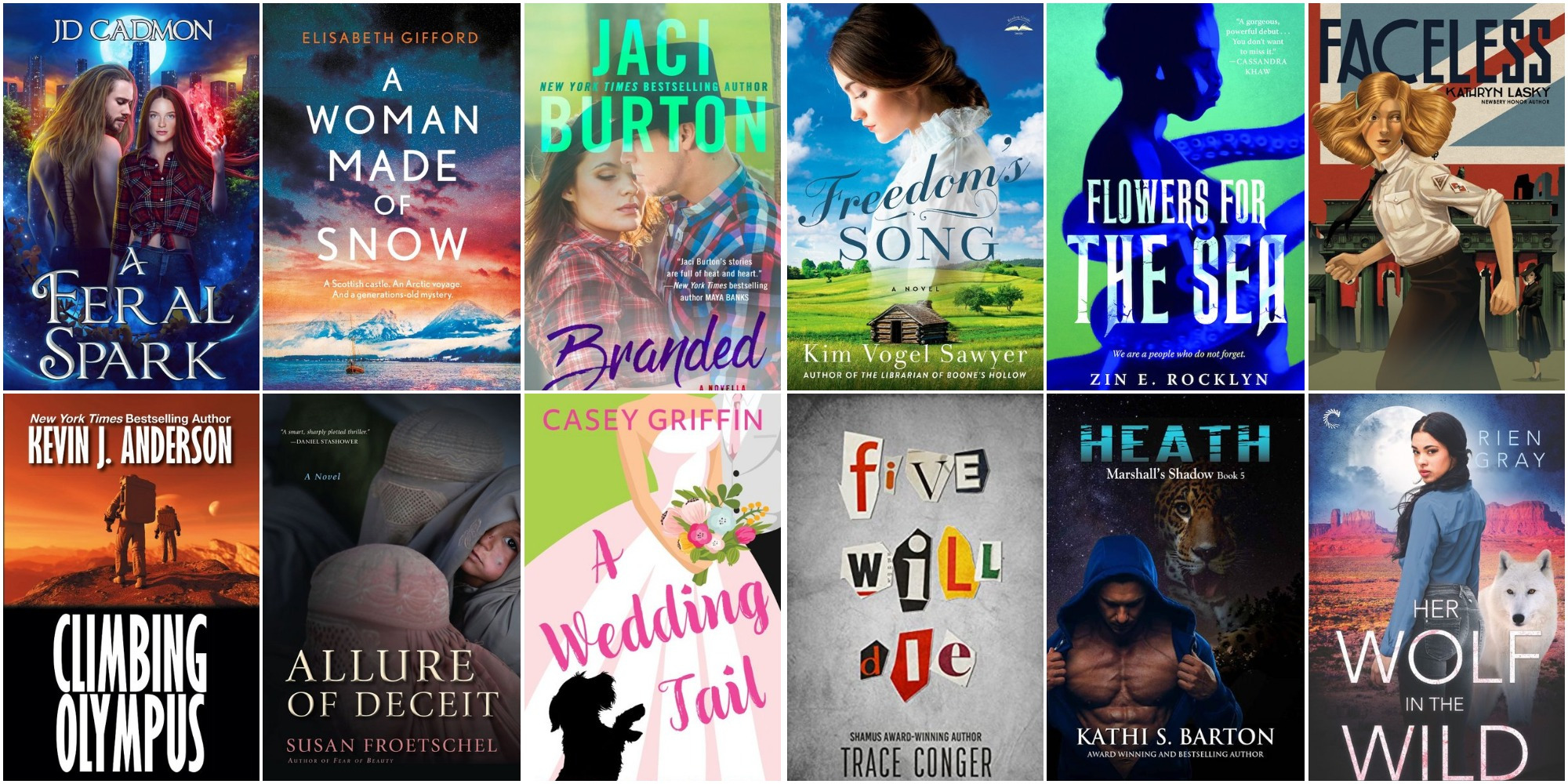 A Feral Spark by J.D. Cadmon

On the run from the genetics lab that made him, a nameless werewolf encounters a young woman whose aura glows with primordial fire. Curious beyond the caution to flee, he is determined to learn the mystery of her light.

A Wedding Tail by Casey Griffin

She’s sworn off men. He treats life like a game. When a deadly bell tolls, can they ring in the suspect and still make their own sweet music? Wedding planner Zoe Plum will never risk love again. But when her latest meticulously organized event implodes, the dog-loving gal’s hopes for financial independence and the down payment on a house go up in smoke.

A Woman Made of Snow by Elisabeth Gifford

Scotland, 1949: Caroline Gillan and her new husband Alasdair have moved back to Kelly Castle, his dilapidated family estate in the middle of nowhere.

Allure of Deceit by Susan Froetschel

A young inventor and his wife die in a car bombing – leaving behind a will that surprises friends and parents by directing a vast fortune toward charities in the developing world.

Love is in the air in this sizzling romance from New York Times bestselling author Jaci Burton. Brea McMasters has always been shy around men, living out her fantasies in all her favorite books.

In order to terraform Mars, Earth first had to transform people… The Red Planet is a harsh place, and normal humans cannot survive there during the many years of taming the planet.

Every Star a Song by Jay Posey

Jay Posey returns with the much-anticipated second installment of the critically acclaimed Ascendance series following a powerful woman who can destroy planets with a single word but who is suddenly faced with an adversary that threatens the entire universe.

Newbery Honor winner Kathryn Lasky, author of the Guardians of Ga’hoole series, delivers a riveting adventure about young British spies on a secret mission in Germany in WWII.

Five Will Die by Trace Conger

Flowers for the Sea by Zin E. Rocklyn

A Library Journal Editor’s Pick! Flowers for the Sea is a dark, dazzling debut novella that reads like Rosemary’s Baby by way of Octavia E. Butler We are a people who do not forget.

Her voice made her a riverboat’s darling—and its prisoner. Now she’s singing her way to freedom in this powerful novel from the bestselling author of The Librarian of Boone’s Hollow.

Marshall’s Shadow Sheppard Dean Oakley Rodney Heath Trenton Paige Avery had been deep, undercover with her brother, James. Their target had been spotted, but something went wrong.

Her Wolf in the Wild by Rien Gray

The Hounds of God MC live outside the law and protect their own. They only have three rules: (1) look out for each other, (2) obey the club president and (3) never show a human your werewolf form. Christiana Arjean needs to get out. She tried to fix her relationship, but making a break for it is her only shot. She almost doesn’t make it, until a butch biker with a shock of white hair tosses Christiana on the back of her bike.

Spencer Quinn’s It’s a Wonderful Woof presents a holiday adventure for Chet the dog, “the most lovable narrator in crime fiction” (Boston Globe), and his human partner, PI Bernie Little.

Kiss the Devil by Linzi Basset

Bleeding Souls, Saved by Love A Sleeping Beauty retelling Vito Vitale had only the withered remnants of a soul long since torn open and defiled. What little remained was charred black and empty.

Printed in Beirut by Jabbour Douaih

Farid Abou Cha’r arrives in Beirut on a hot summer morning with his manuscript, looking for a publisher. He is turned down by all of them—“nobody reads anymore,” he is told. Instead, he accepts a job as a proofreader at the famous old print house “Karam Bros.,” allegedly established in 1908.

The Knife by Ross Ritchell

A powerful, dark, and morally provocative debut novel about a U.S. Special Forces unit operating in the Middle East, written by a former soldier—No Easy Day meets Redeployment… It’s hot and getting hotter this summer in Afghanipakiraqistan—the preferred name for the ambiguous stretch of the world where the U.S. Special Forces operate with little outside attention.

The Serpent Lord by Wren Murphy

A princess torn between tradition and truth. Princess Sarra of Olmalis is a vision of the future—poised, proud, and confident. As her kingdom settles into peace after a long civil war, she yearns to escape the shackles of expectation her father and his court place upon her.

Vampire governor of New Jersey, Belladonna Barrone has just gotten an epic offer from an unexpected visitor, but it’s not something she’s ready to respond to without serious thought. Besides, she already has a lot on her plate. The recent death of a high-ranking vampire means she and her crew of staff and friends are headed off to the funeral in the middle of the country.

The Truth Effect by Anne Mortensen

It’s 2030. The Truth Laws are set to go into effect, unleashing enhanced algorithms that will empower the British Government to regulate all online activity, hunt down Truth Law breakers, and prosecute the guilty.