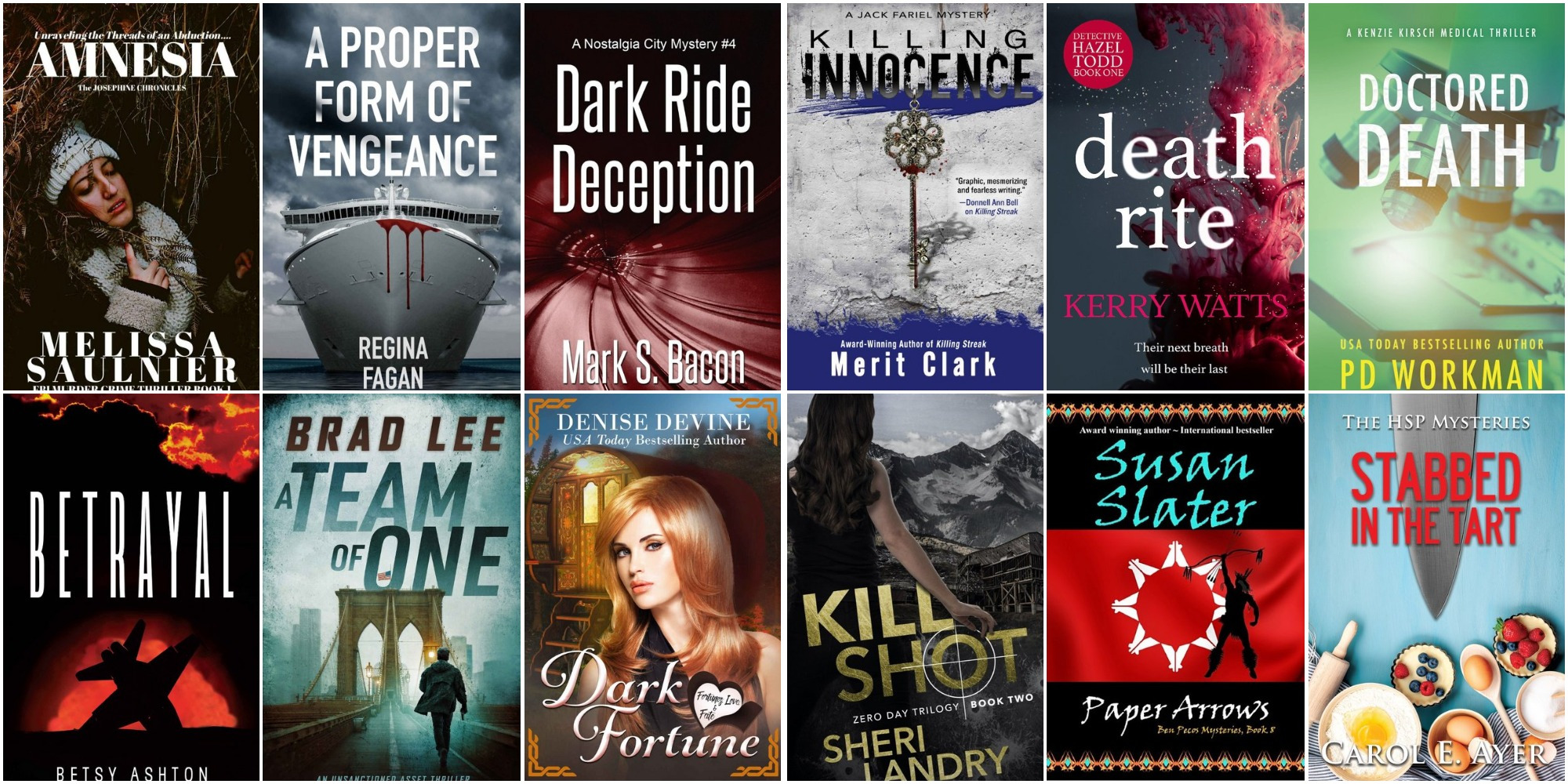 A Proper Form Of Vengeance by Regina Fagan

Who could predict their dream vacation would turn into a nightmare? Allison Stanhope and her husband, Roger, look forward to celebrating their wedding anniversary onboard a luxury cruise ship headed for the South Pacific. Allison is the survivor of a recent, near-deadly, attack. Her assailant was never caught.

A Team of One by Brad Lee

Is Safety an Illusion? New York City faces a fate worse than death. The President suspects a traitor in the White House. And an intelligence analyst discovers a diabolical plot. A former Navy SEAL is enticed out of retirement to help the analyst and the President… but does he have what it takes to save the world?

On December 1, 2007, over 70,000 fans gathered at M&T Bank Stadium for the annual Army-Navy game. Three Navy fighters roar into the stadium air space. One lags behind. The plane sputters. A wing dips. Cheers become screams when the fighter crashes into the tailgating parking lot outside the stadium and explodes. Was it pilot error? Suicide? Mechanical failure? Or worse?

Is Tom Wyrick Dead? The computer genius is missing. So are his priceless tech secrets. Time for Lyle to go undercover, again. Tom Wryick’s mind-bending technology will rocket Nostalgia City theme park decades ahead of the competition.

Their next breath will be their last Forty years ago, the name Rachel McMahon was synonymous with evil. After killing four men in the most brutal of ways, the world rejoiced as she was locked up. Now Rachel has done her time, repented for her crimes, and is ready to live a quiet life back in Scotland under a new name.

From USA Today Bestselling Author, P.D. Workman! Something just doesn’t add up. Assistant medical examiner Kenzie Kirsch thinks that the deaths from Champlain House are linked by more than place. If she is right in her theory, the nursing homes, emergency rooms and the morgue are all going to be overwhelmed.

FOUR ASSASSINS, FIVE SPECIAL FORCES AND A TOWN WITH A SECRET. THEN A year ago, Jessa sacrificed her life for Dana’s freedom and she ran, unknowingly taking vital information with her and leaving Michael and his special ops team behind.

Detective Jack Fariel has more bodies than leads or time. When his homicide investigation uncovers a sex trafficking ring, Jack realizes he’s not up against a single murderer, but a criminal network with ties to the Middle East.

When psychologist Ben Pecos gets the call—his 12 year old ward, Nathan Yazzi has been expelled from school—Ben sees a road trip as an opportunity to spend extended time with the troubled boy, camping and fishing and talking things through.

SHARPE IS BACK. This September, global bestseller Bernard Cornwell returns with his iconic hero, Richard Sharpe. If any man can do the impossible it’s Richard Sharpe . . .

Something Wicked by Beth Byers

Smith is a man who knows when to say no. He avoids the cases where he’ll never get paid. The cases for which no resolution is possible. And, most of all, the heart-rending cases. The ones that start with the tear-filled eyes of a mother, a sister, or a friend. The ones that haunt a man. The ones that push him to his limits.

Stabbed in the Tart by Carol E. Ayer

Home bakery owner and Highly Sensitive Person (HSP) Kayla Jeffries has been hired for the Gourmet and Stay Valentine’s Weekend at the historic Countryside Inn in Los Robles, CA. When one of her fellow cooks is murdered during dinner service, she becomes a person of interest-and a possible suspect.

‘A rattling good thriller. Shades of The Wicker Man. Once I’d started reading, I could not put it down’- Iain Maitland When burned-out investigative journalist Adam Budd’s estranged mother dies, he inherits her estate. This includes Stone Heart House, a huge, ramshackle mansion on a remote Scottish island.

The Daughter’s Choice by S.D. Robertson

The exciting new novel from the bestselling author of My Sister’s Lies. Is her whole life built on a lie? Rose has always been close to her father. Her mother died soon after she was born, so it’s been just the two of them for as long as she can remember.

The Desert of Glass by Michael C. Grumley

One of mankind’s greatest secrets… has been hiding in plain sight for three thousand years.

The Other Husband by Kathryn Croft

One dinner party will destroy everything. It’s a perfect evening on the night that throws a wrecking ball into Abby’s life. There’s still a hint of summer sun in the purple-streaked sky.

A Russian team of ex-KGB agents, led by experienced spymaster Andrei Grushkov, smuggle a nuclear device into the US with the intention of mass destruction.

Inspired by the true story of a forgotten hero, Thomas Scott, author of the Virgil Jones Series, has created an epic tale of courage and heroism detailing one young man’s remarkable resilience and the determination it takes to survive during the darkest times of his life.