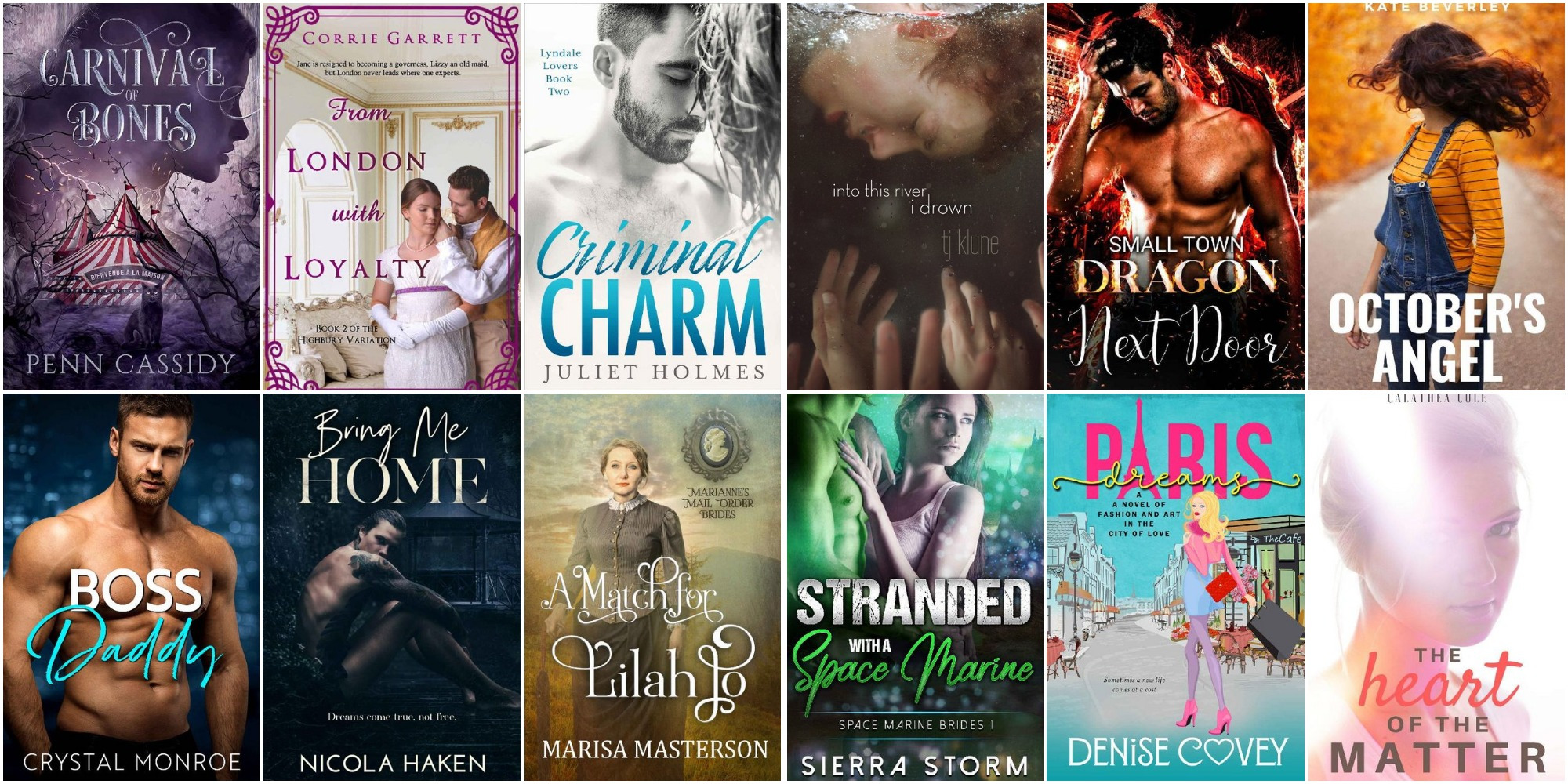 A Match for Lilah Jo by Marisa Masterson

He’s no spring chicken. She’s not a summer blossom. Together, they add up to a marriage made out of necessity. Roland Devers vowed to stay a bachelor after his fiancée broke off their engagement. He never expected to raise a child, especially not a girl.

An Agreeable Alliance by Kasey Stockton

It’s only a little ruse… Rebecca Turner traveled to Bath on the faint hope of finding a cure for her ailing mother—but with very little money to pay for it. Dr. Jared Cooper was unsure he could ever love again until he laid eyes on Rebecca’s cousin—the incomparable Miss Alicia. He’s smitten, but she’s in mourning and thus unavailable for a time. Fortunately, her cousin Rebecca can help.

One wild night with Grant changed my life forever. Never thought I’d see him again… Until I meet my new neighbor. Seven years ago, I sat next to a gorgeous man in first class. The flight was a bumpy ride… But that was NOTHING compared to what I gave him later.

Bring Me Home by Nicola Haken

A tale of friendship, acceptance, and second chances… Hugo Hayes has it all; the voice, the money, the looks. Adored by fans all over the world, there’s nothing more he could ever wish for. Or so it appears. But no one sees what happens off stage.

Carnival of Bones by Penn Cassidy

Bienvenue à la maison The song beckons me. Haunting, tragic and utterly lovely. It calls me to a place deep in the Louisiana Bayou, where impossible things creep in the shadows. Following the voice on the wind, I scratch at the blood coating my skin and dance along the swamps with the crickets. Hands caress my arms and lips coax at mine, begging for me to let them inside. Begging me to surrender.

A small-town, enemies-to-lovers romance! Officer Cal Pindar is the most boring man alive. He’s had to be boring to keep his father’s secrets. The town, his family, and the Feds think his father was a hero, but Cal helped him embezzle money from the crime family he was supposed to be investigating.

From London With Loyalty by Corrie Garrett

The acclaimed Highbury Variation continues! Elizabeth Bennet and Jane Fairfax are in for a chaotic summer full of dancing, duels, and drama. Elizabeth’s quickly ended engagement to Mr. Knightley, as well as her sister’s engagement to Mr. Bingley, has people throwing around words like fortune-hunter and hussy.

Niamh’s banishment from Ireland is as incomprehensible as it was unfair. A fairy thrust into the world of New York; she has to learn to make it on her own. Working as a cleaner in a hospital allows her to hide who and what she is, but an unfortunate incident almost reveals her secret.When Simon, the Lord of Lycan’s first sets eyes on Niamh, he’s captivated, but he’s not the only one.

Into This River I Drown by T.J. Klune

Five years ago, Benji Green lost his beloved father, Big Eddie, who drowned when his truck crashed into a river. All called it an accident, but Benji thought it more. However, even years later, he is buried deep in his grief, throwing himself into taking over Big Eddie’s convenience store in the small town of Roseland, Oregon.

Meghan as always been at odds with Blair. Even though she knows that Blair has a dangerous streak to her, she has never feared her but when she captured and captivated, Meghan finds herself falling hard and fast.

Sometimes the worst day of your life is the best day to start a new life. After being injured in the Boston marathon bombing, NYC fashion designer, SASKIA BELL, 25, struggles with PTSD. Feeling completely lost after her beloved mother dies in her arms, and to escape her controlling billionaire father, Saskia does what she does best. She runs. Flees to Paris. Leaving her life of privilege behind, Saskia struggles to win her place at Paris’s elite Fashion Institut.

He was always my haven when life got bad, The hot young man who seemed to constantly save me from myself. We lost touch after I lost my father, even though we remained neighbors. Then he came charging back into my life when I needed him most.

Stranded with A Space Marine by Sierra Storm

Keslid unclicked his straps and stood on the wall, face to face with me. “The shuttle’s damaged. Communication with the Mercy will take time to set up, and for now we’re moving on emergency power only. We have food, but not much.

The Explorer’s Daughter by Kate Renae

When Adeline Dawson arrives at Fairstone Hall, her past is enshrouded in mystery. She comes as if she’s running from something, with no lady’s maid and little to carry. The only thing of importance she brings with her is an invitation – because the residents of Fairstone Hall are technically family.

The Heart of the Matter by Calathea Cole

It takes just one person to change your life around and Rachael assumed she was all out of surprises since she met her girlfriend Gretchen. However, little does she know that a chance meeting with a stranger has the potential to change their their lives and expand their notions of love, friendship, and family.

The Lost Hourglass by Alice Bamber

Skye is the heroine the world doesn’t know it needs. Bumbling but brave, with sharp elbows, busy feet, fiery amber eyes and a reckless urge to run wild through the night beneath her favourite thing ever, the moonlight, she’s a small but mighty force to be reckoned with…until the unthinkable happens, and the world she’s suddenly destined to save turns upside down.

When she moved to the city from the great rolling farmlands, Natasha never dared to bring hopes of romance along with her. But everything changes when Sawyer, a gorgeous woman full of confidence and sunshine struts into her life and builds her nest right next to her, and Natasha knows that she has found the girl who can keep her warm from fall through winter.

I am Isolde, female, and I’m a grocery store assistant who can shelve like a badass. Until the day I’m scooped up by a lionlike alien called a mauleon, and he has CLAWS, and FANGS. I should have fainted at those. Now I’m trapped on a humongous, fossilized starship.

Witch in the House by Jenna McKnight

Jade Delarue is determined to find the man of her dreams, so the sexy witch casts a spell that brings a gorgeous man to her door. But private detective Mason Kincaid isn’t looking for love. Jilted by his last girlfriend, Mason’s thrown himself into his work.

Men in Black meets Beauty and the Beast A date turned disaster When Officer Lora Griffin volunteered to be in the alien dating auction to help raise money for the local animal shelter, she didn’t expect aliens to start dissolving into puddles of goo.