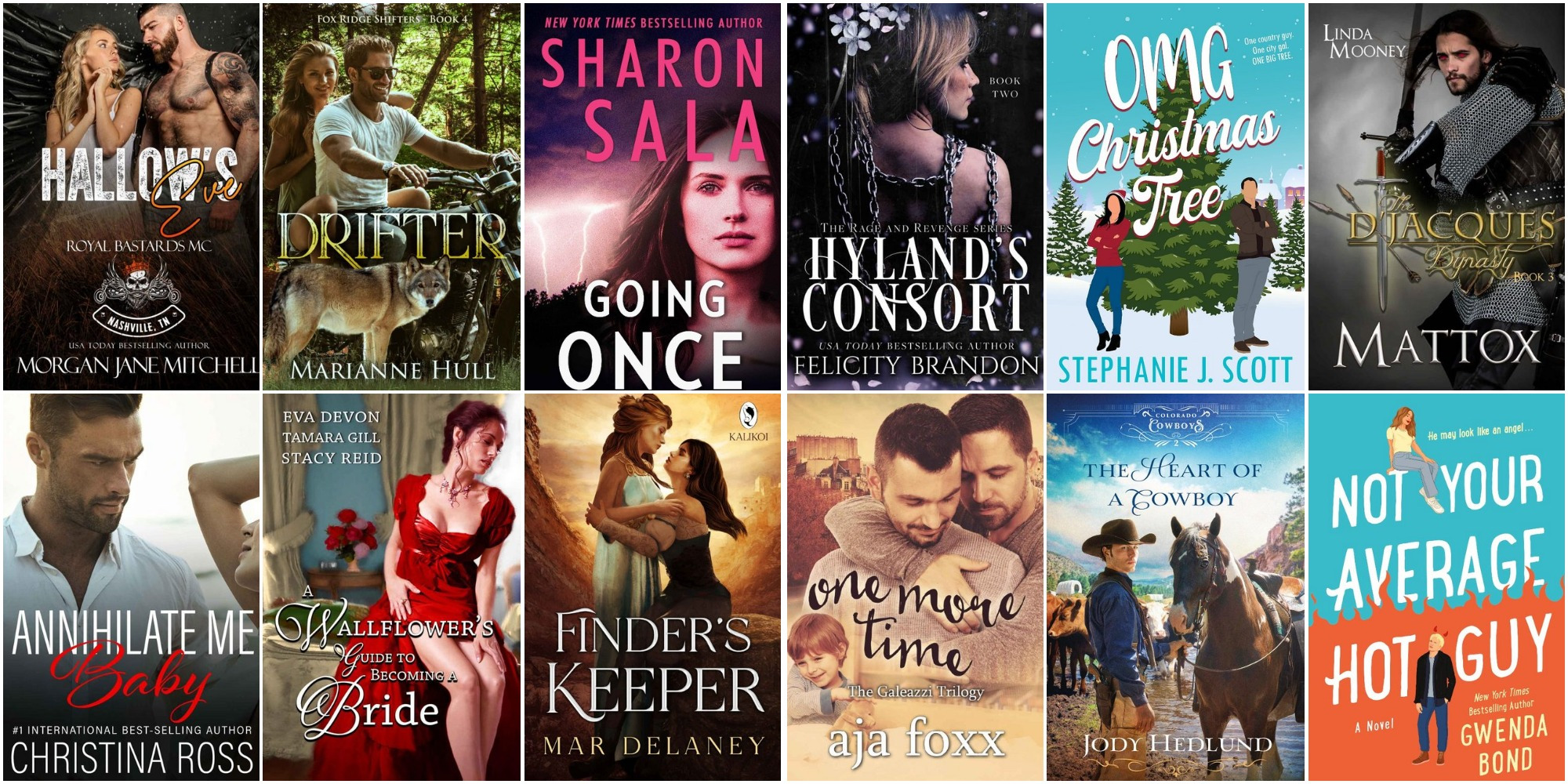 A Wallflower’s Guide to Becoming a Bride by Eva Devon

USA TODAY BESTSELLING AUTHOR, Eva Devon, was raised on literary fiction, but quite accidentally and thankfully, she was introduced to romance one Christmas by Johanna Lindsey’s Mallory novella, The Present.

Annihilate Me, Baby by Christina Ross

#1 International bestselling author Christina Ross returns with a laugh-out-loud romantic comedy in her wildly popular Annihilate Me series, which has sold over 3.5 million copies in six different languages. This book is a love letter to the fans of the series—but it also can easily be read as a stand-alone novel.

They didn’t think he was worth saving… Wolf shifter Ian Drummond hates his life. Troubled by his war service, financially strapped, and so tired of spying he almost wishes he’d get caught, he has little in life to look forward to. Then his true mate walks into his garage.

She can find anything … except the heart she couldn’t keep.

In the walled desert city of Petrichor, Kettrin makes a living by using her unique magical talent to find missing objects and people for anyone who can pay.

Going Once by Sharon Sala

From New York Times bestselling author Sharon Sala. A town reeling from disaster. A reignited passion. The long shadow of a killer. As raging floodwaters engulf her Louisiana hometown, Nola Landry is stranded on high ground, the unwitting witness to the brutal murder of three fellow survivors.

From USA Today Bestselling author, Felicity Brandon, comes a spin off series from the Dark Necessities world. Hyland’s Consort is the second in a dark mafia, arranged marriage romance series. Hold tight, and let this fast-paced novel leave you breathless.

Every five years, Yulen D’Jacques, Battle Lord of Alta Novis, holds a conference to continue strengthening relations between the Normals and Mutah. Both battle lords and Mutah councilmembers from far and wide are invited in an effort to prove how important they could be to each other, and to dismiss any misconceptions Normals may still have toward the people they once considered their inferior enemies.

Not Your Average Hot Guy by Gwenda Bond

“Fun, funny, hot, and heartfelt…The apocalyptic beach read that everyone needs.” – Alix E. Harrow, Hugo Award-winning author A paranormal romantic comedy at the (possible) end of the world. All Callie wanted was a quiet weekend with her best friend.

One country guy. One city girl. One big tree. Three nights before Christmas, and all Megan Campbell needs to do is to pick up a Christmas tree. Never mind she’s a city girl who has never bought a real live tree. The biggest and best tree in the lot should make her mom and her new stepdad happy–and forget how she’s neglected to visit them in their tiny town of Crystal Cove.

One More Time by Aja Foxx

Martino Galeazzi had given me the most precious gift when he’d gotten me pregnant five years ago, but he’d ripped my heart out at the same time. Having him back in my life wasn’t something I had been prepared for. Trust didn’t come easily to me, not even when someone starts messing with my life.

Award-winning author Lori Benton delivers a rich historical novel of faith, hope, and second chances. December 1795 A year has passed since Ian Cameron reluctantly sent his uncle’s former slave Seona and their son, Gabriel, north to his kin in Boston.

The Bone Valley by Candace Robinson

He’s a lover. She’s a thief. A magic bond like no other will tie them together. After the death of his parents, Anton Bereza works hard to provide for his younger siblings.

The Burning Queen by Aziza Sphinx

The Desirable Duchess by M.C. Beaton

Product Description Lovely Alice Lacey was a true Incomparable, and her marriage to the Duke of Ferrant was the event of the Season. But almost none realized, however, that Alice was secretly in love with someone else – or that she had confided her feelings to a clever talking mynah bird who determined to announce these intimacies at the moment of the couple’s wedding!

The Heart of a Cowboy by Jody Hedlund

Traveling the Santa Fe Trail on a botanical exploration, Linnea Newberry longs to be taken seriously by the other members of the expedition. When she is rescued from an accident by Flynn McQuaid, her grandfather hires him to act as Linnea’s bodyguard, and Flynn soon finds himself in the greatest danger of all—falling for a woman he’s determined not to love.

The Holiday Swap by Maggie Knox

A feel-good, holiday-themed romantic comedy about identical twins who switch lives in the days leading up to Christmas—perfect for fans of Christina Lauren’s In a Holidaze and Josie Silver’s One Day in December.

The Vanished Days by Susanna Kearsley

“I’ve loved every one of Susanna’s books! Bedrock research and a butterfly’s delicate touch with characters—historical fiction that sucks you in and won’t let go!”—DIANA GABALDON, #1 New York Times bestselling author of Outlander From international bestselling author Susanna Kearsley comes a historical tale of intrigue and revolution in Scotland, where the exile of King James brought plots, machinations, suspicion and untold bravery to light.

This Used to Be Easier by Katia Rose

Meg Doyle did not intend to return home from college with a suitcase and nowhere else to go.

Witches in Love by Isabel Hansen

Mira has always been the worst witch in the coven, incapable of even remotely controlling her magic. LJ is the most skilled witch the coven has seen in centuries, but she refuses to follow the rules they set out for her.