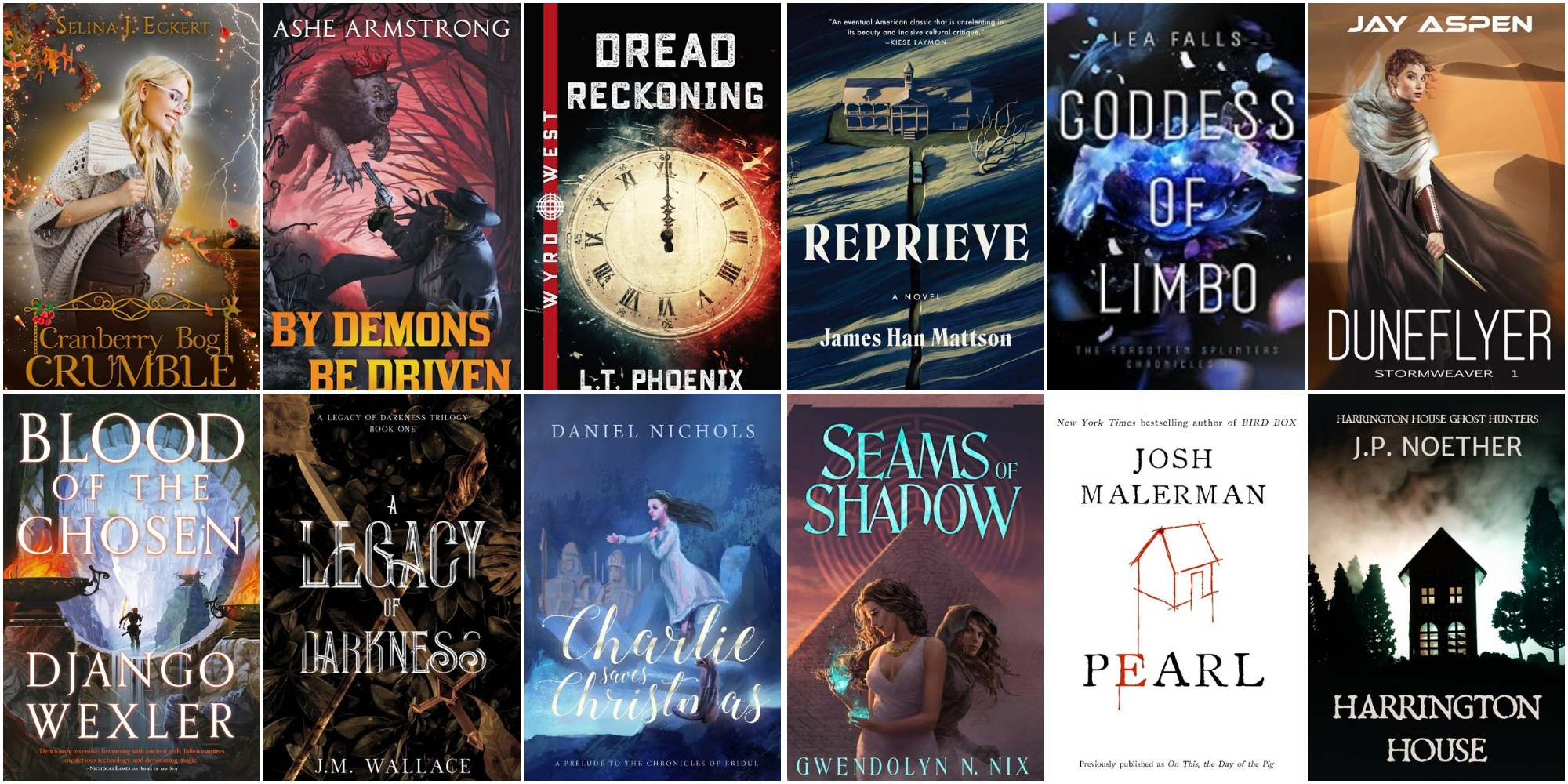 A Legacy of Darkness by J.M Wallace

A reluctant King haunted by his father’s actions. A Druid girl haunted by her bloody childhood. And an impossible quest to save their country… Gripping and action-packed, A Legacy of Darkness is an adrenaline-filled, high fantasy of sword and sorcery, mythical creatures, and a charming cast of characters, perfect for fans of Cinda Williams Chima and Holly Black.

Blood of the Chosen by Django Wexler

In the second book of Django Wexler’s epic fantasy trilogy about two siblings divided by magic and revolution, Gyre must travel across the Splinter Kingdoms to rally the rebels to his side, while his sister Maya uncovers the secrets of a powerful artifact that could change everything.

By Demons Be Driven by Ashe Armstrong

Grimluk is an orc with one purpose: hunting demons. In Grimluk’s profession, sometimes you find the next job, and sometimes the next job finds you. After a demon knight attacks him on the highway, he’s pushed to the decaying town of Dunvich.

A mother’s furtive search for her lost child. A narrow path through a darkling forest. A silver locket burned and forgotten. A young girl thrust into a twilight world races against time to raise the legendary stone army to avert the destruction of all reality.

Something sweet—and terrifying—is coming to Cider Hollow. It has been years since pie witch Reese last saw her candy witch aunt. So when Aunt Kit arrives in a flurry of foul weather, Reese knows something is up. Then Kit disappears during the worst deep freeze Cider Hollow has ever seen.

Royce Falco is scheduled for execution in the Hayworth Penitentiary. His usual confidence to slip from such situations is crushed when a mysterious visitor brings news that his demise has been orchestrated, but also brings an offer to alter his fate… the decision will come at a price. Dread sets in as Royce’s last midnight approaches in the reputably haunted prison, because at 5 o’clock they take him to the gallows post.

A mysterious stranger. A murderous ambush and a sinister plot in the deep desert. Alissa returns home from university, still haunted by the death of her sister and a restlessness that keeps drawing her back into the great sand sea of Irithen, the dangerous heart of a remote province on a distant planet.

Goddess of Limbo by Lea Falls

Free will is a relic of the past. Souls have a prewritten path to heaven. If they miss it, they are doomed to roam the lost realm of limbo as splinters of their former selves or worse—as demons.

It’s a small room in an old house, but it’s cheap. For Laren Tolley, still reeling after a bad breakup, it’s perfect. Who cares if there are rumors that it’s haunted? Her unfortunately-hot landlord and new roommate, Casey, assures her that ghosts aren’t real.

The eagerly anticipated conclusion to the Peaceforgers trilogy After all they’ve sacrificed and the lines they’ve crossed to keep the planet from becoming a literal dystopia, Katja and her surviving allies aren’t sure they—or the human race—will survive 2050.

From the New York Times bestselling author of Bird Box and Malorie, Josh Malerman, comes the legend of a strange new monster unlike any other in horror. There’s something strange about Walter Kopple’s farm. At first it seems to be his grandson, who cruelly murders one of Walter’s pigs in an act of seemingly senseless violence.

A chilling and blisteringly relevant literary novel of social horror centered around a brutal killing that takes place in a full-contact haunted escape room—a provocative exploration of capitalism, hate politics, racial fetishism, and our obsession with fear as…

Evil is the consequence of an individual’s own struggles against non-existence… Ancient monsters of destruction rise from emerging rifts that dot the landscape, pushing cities and the known civilization to their downfall. As her homeland falls into chaos around her and political intrigues arise, Eos—a celestial healer with a thrice-split soul—battles to mitigate the consequences of her ever-increasing powers to help close the rifts connecting her world to an unknown, dangerous underworld.

When math meets aftermath, all Hell will break loose. A near-death experience gives Dalton McGovern an epiphany-through a combination of computer programming and neurotechnology, he will create a virtual afterlife.

Inklebrawt Winklehank is a Huply, a hybrid of the biologically engineered immortal Plythi’i race and a human. Because of his birthright, he has both the logic and enhanced psychokinetic abilities of the Plythi’i paired with the wild emotions and temperament of humanity.

Vasco Alcazar al Madina del Goya had served the empire for most of his life, and retired to live a peaceful life as a fencing instructor. But a life spent in Long Drops, multi-year FTL conquest missions, has left him restless and bored, so it doesn’t take much convincing for an old friend to talk him into signing up again for one more mission.

The Guardian’s Legacy by Luciana Cavallaro

An ancient cover up, a dangerous legacy and the search for the most powerful object. A three-thousand-year old magical coin, the disappearance of an old man, fanatical neo-Nazis, and the hunt by Interpol, merge in this gripping story of an ancient cover up, and the transition of an ordinary man into the guardian of the most powerful coin on earth.

The House of Dust by Noah Broyles

“An ambitious first novel full of the mysteries, histories and rituals of a Tennessee town. Full of nightmarish imagery wrapped in elegant prose, this is a strong debut.” —John Langan, author of Children of the Fang and Other Genealogies Deep in the heat and silence of rural Tennessee, down an untraveled road, sits the forgotten town of Three Summers.

The Original Glitch by Melanie Moyer

In the aftermath of his mentor’s death, grad student Adler is left to piece together and clean up the project she left behind: an adaptive and increasingly malevolent artificial intelligence, kept locked in a virtual “box” that’s no longer quite enough to keep him in check.

This Thing Between Us by Gus Moreno

“As original as it is affecting . . . left me genuinely creeped out, unsettled, and shaken. An existentially frightening book.” —Paul Tremblay, author of Survivor Song “Hold on, this isn’t a ride, it’s a slide, and it doesn’t care whether you’re ready or not.” —Stephen Graham Jones, author of The Only Good Indians A widower battles his grief, rage, and the mysterious evil inhabiting his home smart speaker, in this mesmerizing horror thriller from Gus Moreno. It was Vera’s idea to buy the Itza.