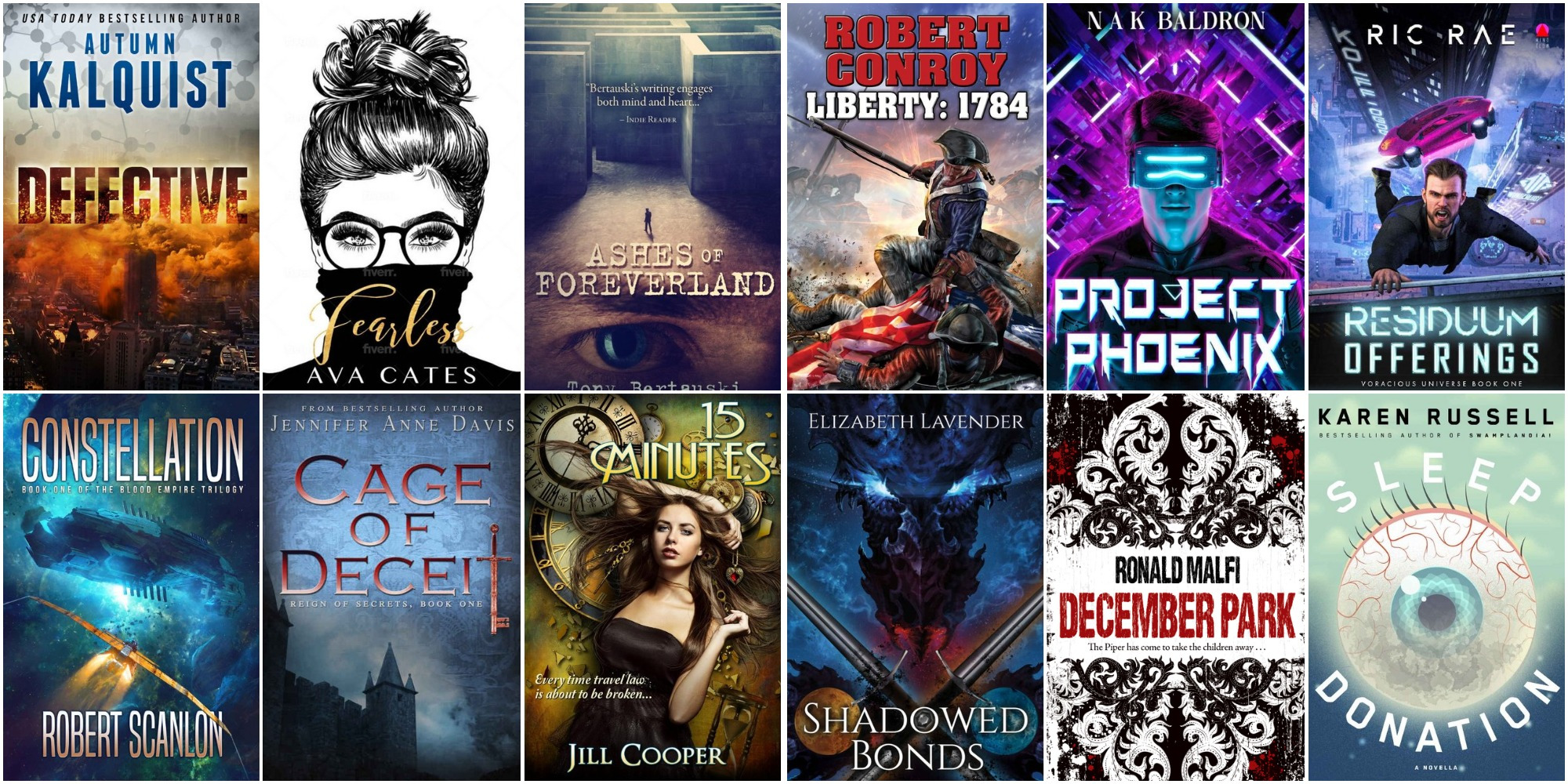 The future can be a dangerous place when you changed the past…. 15 minutes is all the Rewind Agency gives a person when they travel to the past, but for Lara Crane it’s enough for her to race through the city, find her mother, and stop her from being killed in a mugging that happened over ten years ago.

Tyler Ballard was in prison when his son created a dreamworld called Foreverland, a place so boundless and spellbinding that no one ever wanted to leave. Or did. Now his son is dead, his wife is comatose and Tyler is still imprisoned.

A powerful battlecruiser adrift in space. Can a bold pirate steal it from under everyone’s nose? Indy Jackson longs to blast her father’s killer to ashes.

In the quiet suburb of Harting Farms, the weekly crime blotter usually consists of graffiti or the occasional bout of mailbox baseball. But in the fall of 1993, children begin vanishing and one is found dead. Newspapers call him the Piper because he has come to take the children away. But there are darker names for him, too . . .

In the year 2074, a global conspiracy threatens all life on Earth. Humanity battles the worst pandemic the world has ever seen. And the planet is dying. Our mass extinction event has arrived.

The struggle is real! And Julia is definitely feeling it right now. She is trying to stay positive as Xavier, Jeremy/Luke, Madeline, and herself all have to learn to work together. Plus she is continuing her life on the farm and attending a regular high school.

Tom grew up in a small town, and at thirteen he figured out what he really was. A Necromancer. For much of his life, that didn’t make much of a difference, and he didn’t see any real benefit in it, until one day in his third year of college a young woman catches his eye. One that is haunted by a ghost, and not just one, every time he sees her she has a new spectral passenger he winds up banishing.

Ghosts of War by George Mann

Ghosts of War picks up the story a month after the end of Ghosts of Manhattan. New York City is being plagued by a pack of ferocious brass raptors – strange, skeleton-like creations with bat-like wings that swoop out of the sky, attacking people and carrying them away into the night.

Ditchdigging or Videogaming? The choice is yours. In 2038, PROJECT PHOENIX has taken the world by storm. The simulated reality game of the century promises wealth and freedom the government has banned. But not everyone sees it that way.

Victory is buried under the trail of Black Dragon destruction. Can two spear-bearers’ unshakeable connection reignite the flame against Black Dragon? As the long-anticipated meeting between Dante and the Girl finally arrives, it’s bittersweet.

From the author of the New York Times bestseller Swamplandia!, and finalist for the Pulitzer Prize, an imaginative and haunting novella about an insomnia epidemic set in the near future.

The latest Broken Magic novel from national bestselling author Devon Monk. Marked by Life and Death magic, Shame Flynn and Terric Conley are “breakers”—those who can use magic to its full extent. Most of the time, they can barely stand each other, but they know they have to work together to defeat a common enemy—rogue magic user Eli Collins.

“A fast-paced military thrill ride.” – Amazon Reviewer Captain Keyes is loved by the public but hated by Command. He captains the UHS Providence, an aging supercarrier and the last human ship not dependent on dark tech – technology humanity has used to rule over the galaxy since barely defeating the Ixa in the First Galactic War.

The Earthspark by Vanessa Thurgood

Earth destroyed her family’s past. Will Fire destroy its future? The Earthspark, a cursed power that nearly destroyed Nienna’s family a thousand years ago, has appeared once more, and she’s the one holding the knife.

The Hood of Locksley by Erik Schubach

Her faith, unshakable… and her aim is true. The legends of fairytales descend upon Issaquah, Washington from Seattle in response to the report of demon activity. They find themselves under attack by an archer with uncanny aim and unnatural speed and agility. The group’s beta wolf, Amanda Danes, finds herself in pursuit of a legend. Robyn of Locksley. The fabled Robin Hood of Nottingham.

The Way to Babylon by Paul Kearney

Michael Riven—a successful author and former soldier—has fallen off a mountain. Broken in both body and mind, racked with guilt and loss by the death of his wife Jenny, he withdraws into himself in the rural hospital where he painfully recovers. His readers are desperate to know what will happen next in the fantasy world of his stories, but neither writing, nor living, are of interest to him anymore.

Jillian Talbot has it all: a beautiful home in New York’s Greenwich Village, a string of bestselling suspense novels, a handsome and adoring lover. She has something else, too. A silent stalker.