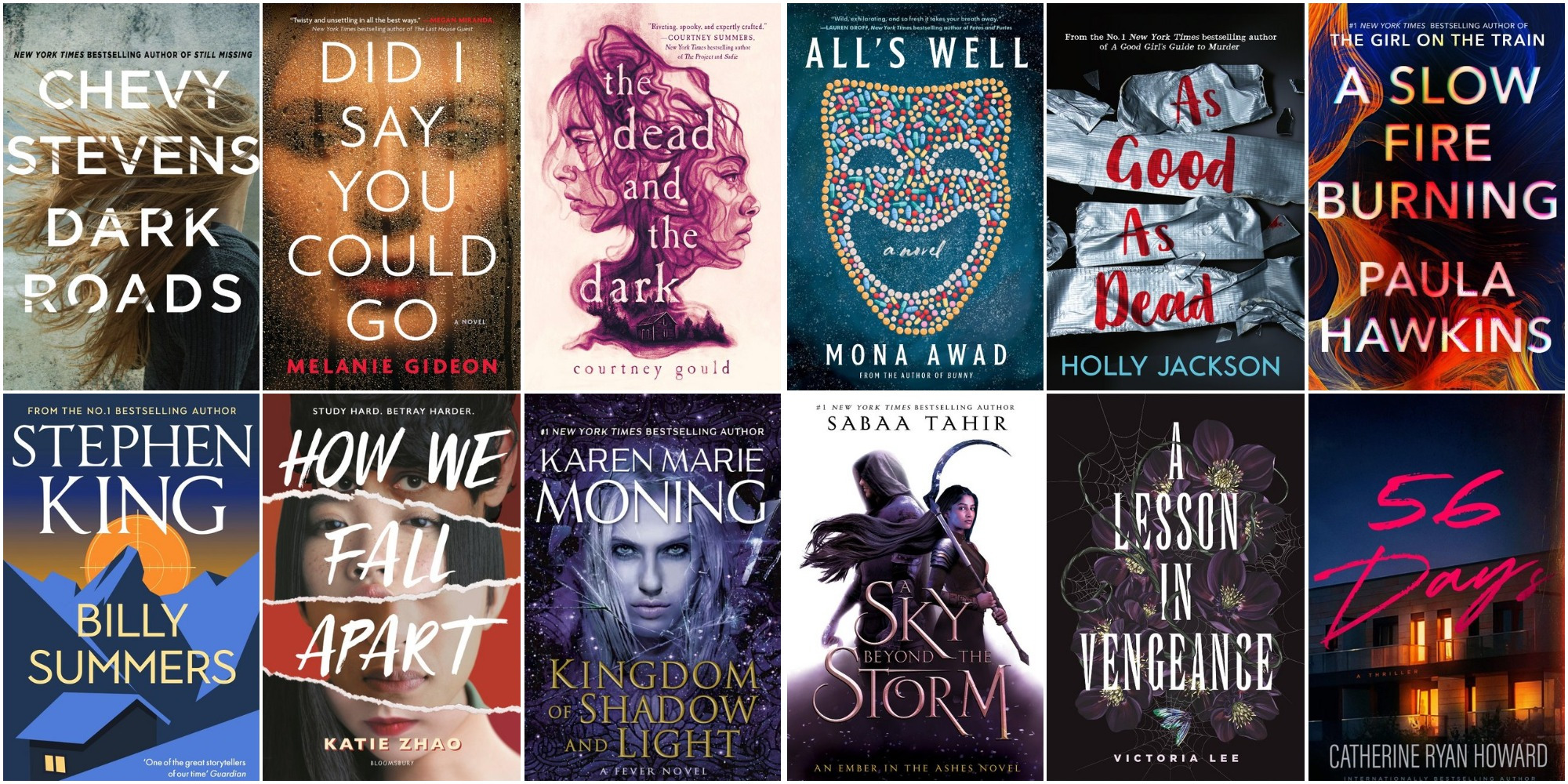 No one even knew they were together. Now one of them is dead.56 DAYS AGOCiara and Oliver meet in a supermarket queue in Dublin and start dating the same week COVID-19 reaches Irish shores.

A Lesson in Vengeance by Victoria Lee

For fans of Wilder Girls and Ninth House, comes a dark, twisty, atmospheric thriller about a boarding school haunted by its history of witchcraft and two girls dangerously close to digging up the past. Witchcraft is woven into the Dalloway School’s history.

AN INSTANT #1 NEW YORK TIMES BESTSELLER The scorching new thriller from the #1 New York Times bestselling author of The Girl on the Train. “ A Slow Fire Burning twists and turns like a great thriller should, but it’s also deep, intelligent and intensely human.” – Lee Child “Only a clairvoyant could anticipate the book’s ending”

A ​Sky Beyond the Storm by Sabaa Tahir

Prepare for the jaw-dropping finale of Sabaa Tahir’s beloved New York Times bestselling An Ember in the Ashes fantasy series, and discover: Who will survive the storm? Picking up just a few months after A Reaper at the Gates left off…

From the author of Bunny, which Margaret Atwood hails as “genius,” comes a dazzling and darkly funny novel about a theater professor who is convinced staging Shakespeare’s most maligned play will remedy all that ails her—but at what cost?

As Good As Dead by Holly Jackson

The highly anticipated finale to the A Good Girl’s Guide to Murder series, the instant New York Times bestsellers that read like your favorite true crime podcast or show. By the end of this mystery series, you’ll never think of good girls the same way again…

#1 New York Times Bestseller From legendary storyteller Stephen King, whose “restless imagination is a power that cannot be contained” (The New York Times Book Review), comes a thrilling new novel about a good guy in a bad job. Billy Summers is a man in a room with a gun. He’s a killer for hire and the best in the business.

“Chevy Stevens is a brilliant and unique talent and Dark Roads is an instant classic. My hat’s off to her.” — C. J. Box, #1 New York Times bestselling author of Long Range “My favorite Chevy Stevens book since Still Missing…

Did I Say You Could Go by Melanie Gideon

A suspenseful, gripping novel about families and friendships torn apart at the seams by obsession, secrets, and betrayal with relentless twists and turns that hurtle forward to a shocking confrontation. When Ruth, a wealthy divorcee, offers to host the Hillside Academy kindergarten meet-and-greet, she hopes this will be a fresh start for her and her introverted daughter, Marley.

How We Fall Apart by Katie Zhao

In a YA thriller that is Crazy Rich Asians meets One of Us is Lying, students at an elite prep school are forced to confront their secrets when their ex-best friend turns up dead. Nancy Luo is shocked when her former best friend, Jamie Ruan, top-ranked junior at Sinclair Prep, goes missing, and then is found dead.

Kingdom of Shadow and Light by Karen Marie Moning

NEW YORK TIMES BESTSELLER • MacKayla Lane faces the ultimate threat when war breaks out between the kingdoms of shadow and light, as the Fever series races to an explosive revelation. From the moment MacKayla Lane arrived in Dublin to hunt her sister’s murderer, she’s had to fight one dangerous battle after the next: to survive, to secure power, to keep her city safe, to protect the people she loves.

My Heart Is a Chainsaw by Stephen Graham Jones

In her quickly gentrifying rural lake town Jade sees recent events only her encyclopedic knowledge of horror films could have prepared her for in this latest novel from the Jordan Peele of horror literature, New York Timesbestselling author Stephen Graham Jones. “Some girls just don’t know how to die…”

The Dead and the Dark by Courtney Gould

“Imagine Riverdale crossing streams with Stephen King’s The Outsider and you’ll get a sense of this gripping supernatural mystery…Gould’s debut begins as a snappy paranormal yarn and unspools into a profound story about the complex interplay between grief, guilt, and identity.”

The Heart Principle by Helen Hoang

A woman struggling with burnout learns to embrace the unexpected—and the man she enlists to help her—in this new New York Times bestselling romance by Helen Hoang.

The Husbands by Chandler Baker

“Chandler Baker, queen of the feminist thriller, has delivered once again! The Husbands is a poignant exploration of what it would take for women to have it all. —Sally Hepworth, New York Times bestselling author of The Good Sister FChandler Baker, the New York Times bestselling author of Whisper Network, is back with The Husbands, a novel that asks: to what lengths will a woman go for a little more help from her husband?

The People We Keep by Allison Larkin

“Raw, surprising and ultimately uplifting, Allison Larkin’s The People We Keep will break your heart a million different ways before putting it back together again.” —Julia Claiborne Johnson, author of Be Frank with Me The People we Keep is a “big-hearted and deeply moving novel” (Bruce Holsinger, author of The Gifted School) from the bestselling author of Stay and Swimming for Sunlight about a young songwriter longing to find a home in the world.

“Abé is an exquisite storyteller. Rich in detail and deeply moving.” —Fiona Davis, New York Times bestselling author of The Lions of Fifth Avenue “One of the most beautifully written books I’ve ever had the pleasure to read. A gorgeous, phenomenal novel I won’t soon forget.” —Ellen Marie

Velvet Was the Night by Silvia Moreno-Garcia

We Are the Brennans by Tracey Lange

In the vein of Mary Beth Keane’s Ask Again, Yes and Cynthia D’Aprix Sweeney’s The Nest, Tracey Lange’s We Are the Brennans explores the staying power of shame—and the redemptive power of love—in an Irish Catholic family torn apart by secrets. When twenty-nine-year-old Sunday Brennan wakes up in a Los Angeles hospital, bruised and battered after a drunk driving accident she caused, she swallows her pride and goes home to her family in New York.

We Were Never Here by Andrea Bartz

A backpacking trip has deadly consequences in this “eerie psychological thriller . . . with alluring locales, Hitchcockian tension, and possibly the best pair of female leads since Thelma and Louise” (BookPage), from the bestselling author of The Lost Night and The Herd. “Bartz takes the idea of a ‘frenemy’ to new heights. . . .