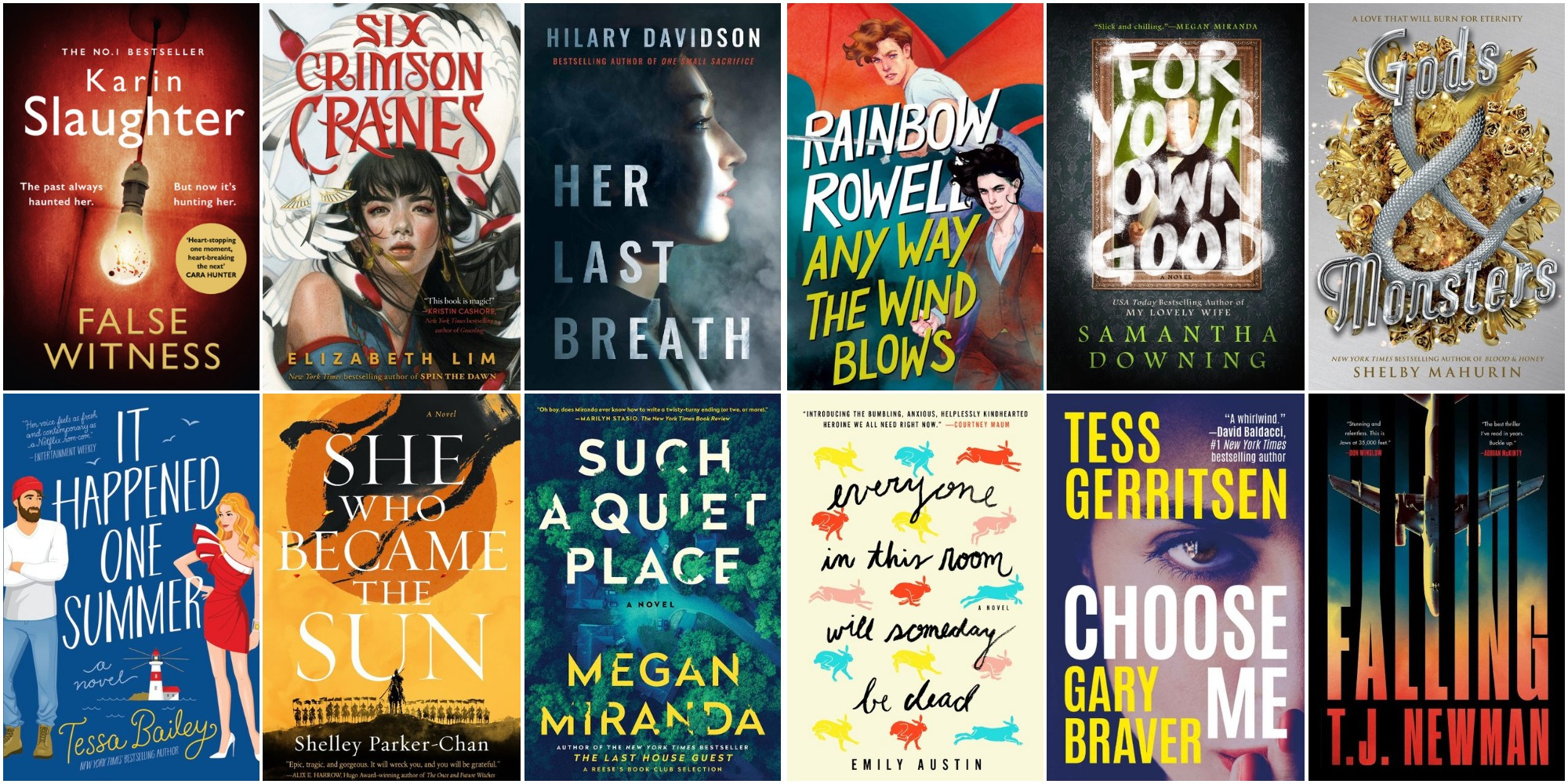 Any Way the Wind Blows by Rainbow Rowell

New York Times bestselling author Rainbow Rowell’s epic fantasy, the Simon Snow trilogy, concludes in Any Way the Wind Blows. In Carry On, Simon Snow and his friends realized that everything they thought they understood about the world might be wrong.

Everyone in This Room Will Someday Be Dead by Emily Austin

This hilarious and profound debut for fans of Mostly Dead Things and Goodbye, Vitamin, follows a morbidly anxious young woman—”the kindhearted heroine we all need right now” (Courtney Maum, New York Times bestselling author)—who stumbles into a job as a receptionist at a Catholic church and becomes obsessed with her predecessor’s mysterious death.

This is Jaws at 35,000 feet.” —Don Winslow “Falling is the best kind of thriller…Nonstop, totally authentic suspense.” —James Patterson “Amazing…Intense suspense, shocks, and scares…Chilling.” —Lee Child You just boarded a flight to New York. There are one hundred and forty-three other passengers onboard.

The stunning new thriller from the No. 1 Sunday Times bestselling author You thought no one saw you. You were wrong. Leigh and her sister Callie are not bad people – but one night, more than two decades ago, they did something terrible.

For Your Own Good by Samantha Downing

“Wonderfully dark, twisty and compelling.” —B.A. Paris “A slick and chilling thriller, leading readers on a dark, sinuous journey through the halls of Belmont Academy—the type of place where you’re never sure who to trust, or who to fear.”—Megan Miranda “Dark, sly and delicious…totally original—and totally compelling.”

Evil always seeks a foothold. We must not give it one. The electrifying conclusion to the New York Times and Indiebound bestselling Serpent & Dove series is perfect for fans of Sarah J. Maas and Kendare Blake. Lou has spent her whole life running.

Her Last Breath by Hilary Davidson

From the bestselling author of One Small Sacrifice comes a suspenseful thriller about a dead woman who predicted her own murder—and the sister who won’t let the truth be buried. When her beloved sister Caroline dies suddenly, Deirdre is heartbroken.

It Happened One Summer by Tessa Bailey

Tessa Bailey is back with a Schitt’s Creek-inspired rom-com about a Hollywood “It Girl” who’s cut off from her wealthy family and exiled to a small Pacific Northwest beach town… where she butts heads with a surly, sexy local who thinks she doesn’t belong.

She Who Became the Sun by Shelley Parker-Chan

“Magnificent in every way.”—Samantha Shannon, author of The Priory of the Orange Tree “A dazzling new world of fate, war, love and betrayal.”—Zen Cho, author of Black Water Sister She Who Became the Sun reimagines the rise to power of the Ming Dynasty’s founding emperor. To possess the Mandate of Heaven, the female monk Zhu will do anything “I refuse to be nothing…”

A princess in exile, a shapeshifting dragon, six enchanted cranes, and an unspeakable curse… Drawing from fairy tales and East Asian folklore, this original fantasy from the author of Spin the Dawn is perfect for fans of Shadow and Bone. “A dazzling fairytale full of breathtaking storytelling.” —Stephanie Garber, New York Times bestselling author of Caraval Shiori’anma, the only princess of Kiata, has a secret. Forbidden magic runs through her veins.

Such a Quiet Place

From the New York Timesbestselling author of The Last House Guest—a Reese Witherspoon Book Club selection—comes a new riveting suspense novel about a mysterious murder in an idyllic and close-knit neighborhood. There was no warning that she would come back. Welcome to Hollow’s Edge.

Survive the Night by Riley Sager

One of New York Times Book Review’s “summer reads guaranteed to make your heart thump and your skin crawl”; An Amazon Best of the Month Pick; Named a must-read summer book by The Washington Post, Vulture, BuzzFeed, Forbes, Entertainment Weekly, CNN, New York Post, Good Housekeeping, E!, PopSugar, CrimeReads, Thrillist, and BookRiot.  It’s November 1991. Nirvana’s in the tape deck, George H. W. Bush is in the White House, and movie-obsessed college student Charlie Jordan is in a car with a man who might be a serial killer.

The Forest of Vanishing Stars by Kristin Harmel

The New York Times bestselling author of the “heart-stopping tale of survival and heroism” (People) The Book of Lost Names returns with an evocative coming-of-age World War II story about a young woman who uses her knowledge of the wilderness to help Jewish refugees escape the Nazis—until a secret from her past threatens everything.

Two moms as opposite as a Happy Meal and a quinoa bowl. What a difference a week makes in a heartfelt, laugh-out-loud novel by the Washington Post bestselling author of The Overdue Life of Amy Byler. Celeste Mason is the Pinterest stay-at-home supermom of other mothers’ nightmares.

The Stranger in the Mirror by Liv Constantine

A diabolically twisty, psychologically unsettling novel about a woman with no recollection of her past from the authors of the Reese Witherspoon Book Club pick The Last Mrs.

The Taking of Jake Livingston by Ryan Douglass

Get Out meets Danielle Vega in this YA social thriller where survival is not a guarantee. Jake Livingston is one of the only black kids at St. Clair Prep, one of the others being his infinitely more popular older brother. It’s hard enough fitting in but to make matters worse and definitely more complicated, Jake can see the dead.

The Therapist by B.A. Paris

The multimillion-copy New York Times bestselling author B.A. Paris returns to her heartland of gripping psychological suspense in The Therapist–a powerful tale of a house that holds a shocking secret. When Alice and Leo move into a newly renovated house in The Circle, a gated community of exclusive houses, it is everything they’ve dreamed of. But appearances can be deceptive…