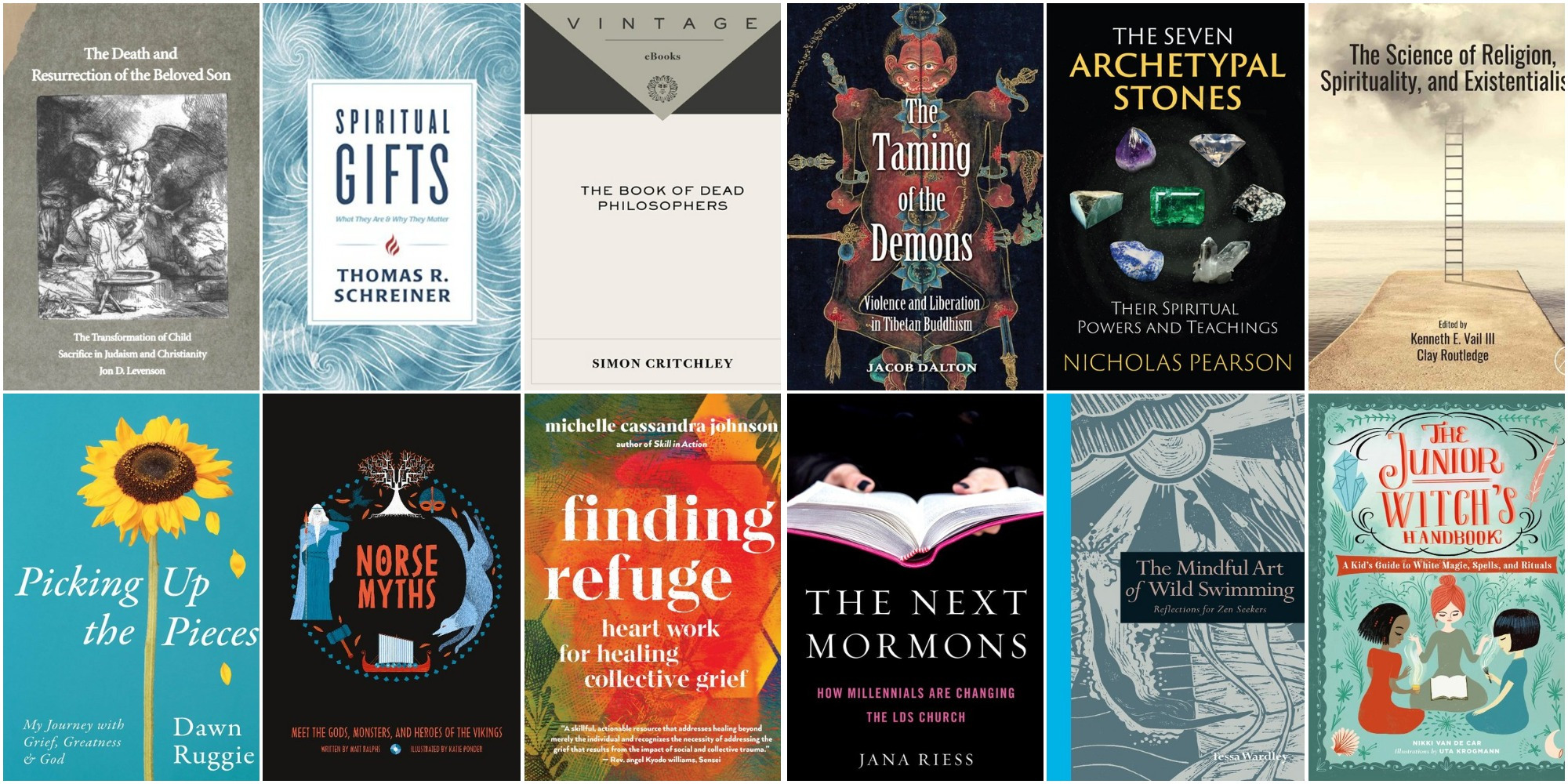 Religion has its basis in belief. Philosophy , on the other hand, is a critic of belief and belief systems. Philosophy subjects what some would be satisfied in believing to severe examination. Philosophy looks for rational explications and justifications for beliefs.

Learn how to process your own grief—as well as family, community, and global grief—with this fierce and openhearted guide to healing in an unjust world. In unsettling and uncertain times, the individual and collective heartbreak that lives in our bodies and communities can feel insurmountable.

The Science of Religion, Spirituality by Kenneth E. Vail III

The Science of Religion, Spirituality, and Existentialism presents in-depth analysis of the core issues in existential psychology, their connections to religion and spirituality (e.g., religious concepts, beliefs, identities, and practices), and their diverse outcomes (e.g., psychological, social, cultural, and health).

The Taming of the Demons by Jacob P. Dalton

The Taming of the Demons examines mythic and ritual themes of violence, demon taming, and blood sacrifice in Tibetan Buddhism. Taking as its starting point Tibet’s so-called age of fragmentation (842 to 986 C.E.), the book draws on previously unstudied manuscripts discovered in the “library cave” near Dunhuang, on the old Silk Road.

A guide to the mystery teachings of the mineral kingdom for catalyzing spiritual growth and healing • Focuses on 7 essential crystal and gemstone mentors: obsidian, jade, lapis lazuli, emerald, quartz, amethyst, and diamond • Integrates crystal lore from around the world with mineral science to reveal the archetypal wisdom embodied within each stone • Provides crystal healing exercises and meditations on the specific spiritual work each stone archetype supports Stones and crystals are our most ancient teachers.

The Mindful Art of Wild Swimming by Tessa Wardley

“Tessa Wardley is a keen and knowledgeable guide” – Times Literary Supplement The Mindful Art of Wild Swimming explores how swimming in rivers, lakes, and seas is the very epitome of conscious living.

The Next Mormons by Jana Riess

American Millennials—the generation born in the 1980s and 1990s—have been leaving organized religion in unprecedented numbers. For a long time, the Church of Jesus Christ of Latter-day Saints was an exception: nearly three-quarters of people who grew up Mormon stayed that way into adulthood. In The Next Mormons, Jana Riess demonstrates that things are starting to change.

What are the spiritual gifts? Do all Christians have them? Have the miraculous gifts ceased? The topic of spiritual gifts is often a point of contention among Christians. In Spiritual Gifts: What They Are and Why They Matter, Dr. Thomas R. Schreiner, a leading New Testament scholar, answers these questions.

The Lord and His Prayer by Tom Wright

In this book of pastoral reflections N.T. Wright explores how the Lord’s Prayer sums up what Jesus was all about in his first-century setting. Wright locates the Lord’s Prayer, clause by clause, within the historical life and work of Jesus and allows the prayer’s devotional application to grow out of its historical context. The result is a fresh understanding of Christian spirituality and the life of prayer. This deeply devotional book will refresh and stimulate the heart and mind of any reader.

An empowering guide for young witches about the kinds of magic they can create for themselves every day. Intended for children between the ages of eight and twelve, who are curious about the possibility of “something more” in their lives, this handbook focuses on three major areas of the witch’s life: friendship, personal fulfillment, and family. Each section includes spells, rituals, potions, and other useful information, such as tables about crystals, chakras, and herbs.

The Death and Resurrection by Jon D. Levenson

The near-sacrifice and miraculous restoration of a beloved son is a central but largely overlooked theme in both Judaism and Christianity, celebrated in biblical texts on Isaac, Ishmael, Jacob, Joseph, and Jesus.

The Book Of Dead Philosophers by Simon Critchley

“To philosophize is to learn how to die.” –Cicero; assassinated by order of Mark Antony “One who no longer is cannot suffer.” –Lucretius; suicide, allegedly driven mad by a love potion “Life is solitary, poor, nasty, brutish, and short.” –Hobbes; died in bed, age 91 In this collection of brief lives (and deaths) of nearly two hundred of the world’s greatest thinkers, noted philosopher Simon Critchley creates a register of mortality that is tragic, amusing, absurd, and exemplary.

Picking Up the Pieces by Dawn Ruggie

On January 26, 2019, just weeks after celebrating the birth of their first grandchild, Dawn Ruggie received the call that no parent should ever get. Her beautiful daughter, Brielle, was very ill and in the emergency room. Brielle, a vibrant 21 year old, who had recently given birth to a baby girl was on the verge of realizing all of her dreams.

A beautifully illustrated and compelling collection of more than 30 ancient Norse myths for children. Exciting stories, extraordinary creatures, and compelling gods, goddesses, and heroes come together in this compendium of Norse myths–first told long ago by the Vikings. Perfect for children ages 7 to 9, this collection contains more than 30 enthralling new retellings.

Rudolf Otto coined the term numinous to refer to the primal experience of the holy. When captured and articulated, the numinous is the basis of religion and culture. But in our age of religious unbelief and cultural decline, where do we find the numinous sources of spiritual and cultural renewal? According to Christopher Pankhurst’s Numinous Machines, the answer is all around us — along the margins and even in the dregs of modern culture — if only we have eyes to see.

Modern Mysteries of the World by Janet Bord

The list of books on a similar theme to this one written by these two authors, suggests they might be making a life-time study of the paranormal. Unlike others who have tackled this subject, they bring a great deal of experience and research to this product.

More meets Christians where they’re at, acknowledging the roots of their discontent and demonstrating how to move from inspiration and desire into action. Church strategist and ministry activator Todd Wilson shows how all believers can live more abundant lives around the uniqueness of how they were made and what they are called to do.

Do You Experience a Cycle of Going Up and Coming Down? This Book is For You. There are monitoring spirits around which monitor people. Perhaps you are wondering how your enemies know your secrets or what you are up to and every move you make, or perhaps you do not understand how the enemy knows that you are at the edge of a breakthrough and he comes and truncates it.

Husserl’s Crisis of the European Sciences by Dermot Moran

The Crisis of the European Sciences is Husserl’s last and most influential book, written in Nazi Germany where he was discriminated against as a Jew. It incisively identifies the urgent moral and existential crises of the age and defends the relevance of philosophy at a time of both scientific progress and political barbarism.

Tired of being at the bottom of the “food chain”? Do you ever feel like you have fallen behind whilst some other guys seem to have it all? Are you frustrated and feel like some major changes are overdue? Then keep reading.. When an alpha enters the room – he commands respect and asserts authority.

Mercy in the City by Kerry Weber

When Jesus asked us to feed the hungry, give drink to the thirsty, and visit the imprisoned, he didn’t mean it literally, right? Kerry Weber, a modern, young, single woman in New York City sets out to see if she can practice the Corporal Works of Mercy in an authentic, personal, meaningful manner while maintaining a full, robust, regular life.

Review One of the most remarkable productions of the century. –New York Herald, 1877 It must be acknowledged that she is a remarkable woman, who has read more, seen more, and thought more than most wise men. Her work abounds in quotations from a dozen different languages, not for the purpose of a vain display of erudition, but to substantiate her peculiar views . . .

Introduction to Islam by Tariq Ramadan

From one of the most prominent intellectuals in the Muslim world comes a timely new introduction to one of the world’s most practiced-and most misunderstood-religions. In frank, unapologetic language, Tariq Ramadan walks readers through Islam and its principles, rituals, diversity, and evolution.

German Philosophy in the Twentieth Century by Julian Young

The course of German philosophy in the twentieth century is one of the most exciting, diverse and controversial periods in the history of human thought.

Mary Katherine Backstrom shares heartbreaking and hilarious stories of how God uses each “mess” in our lives to bring us closer to Him. She shows us that it’s okay to celebrate exactly where we are right now—holy hot mess and all.

Happy Ways of Seeing the World by Jimmy Chua

We are what we see, because the world outside of us can have infinite ways of interpreting. For example, a picture of Jimmy Chua may elicit different emotions; some see his picture will feel that he is HAPPY. Some say it is not possible to be ALWAYS HAPPY, he is faking it! So who is RIGHT, everyone is RIGHT, because we are always RIGHT and others are WRONG. Read this book and discover happiness with me.

From Plato to Christ by Louis Markos

What does Plato have to do with the Christian faith?Quite a bit, it turns out. In ways that might surprise us, Christians throughout the history of the church and even today have inherited aspects of the ancient Greek philosophy of Plato, who was both Socrates’s student and Aristotle’s teacher.

Finding Life at the Center of God’s Affection Are you feeling down, stuck between a rock and a hard place with nowhere to turn to and no one to ask for help? Then this book is for you! In Dictionary of Unmerited Favor, Prayer Madueke shows you what Grace really means, and not as the world would define it, but as God’s powerful love for you to bring you closer to him. While many books of this nature tend to focus on the spiritual and mental aspects of going through difficult periods in life, Dictionary of Unmerited Favor is a guide that offers practical, actionable advice that is divinely inspired and backed by God’s immutable words.

Blame Your Planet by Stella Hyde

Stella Hyde presents a hilarious exposé of the not-so-nice parts of astrological destiny with shocking conclusions supported by complete astrological research for all 12 signs. In Blame Your Planet, she exposes the hidden underside of the stars, and how they affect the dark side of everyone.

What are African religions? African Religions: A Very Short Introduction answers this question by examining primarily indigenous religious traditions on the African continent, as well as exploring Christianity and Islam. It focuses on the diversity of ethnic groups, languages, cultures, and worldviews, emphasizing the continent’s regional diversity. Olupona examines a wide range of African religious traditions on their own terms and in their social, cultural, and political contexts.