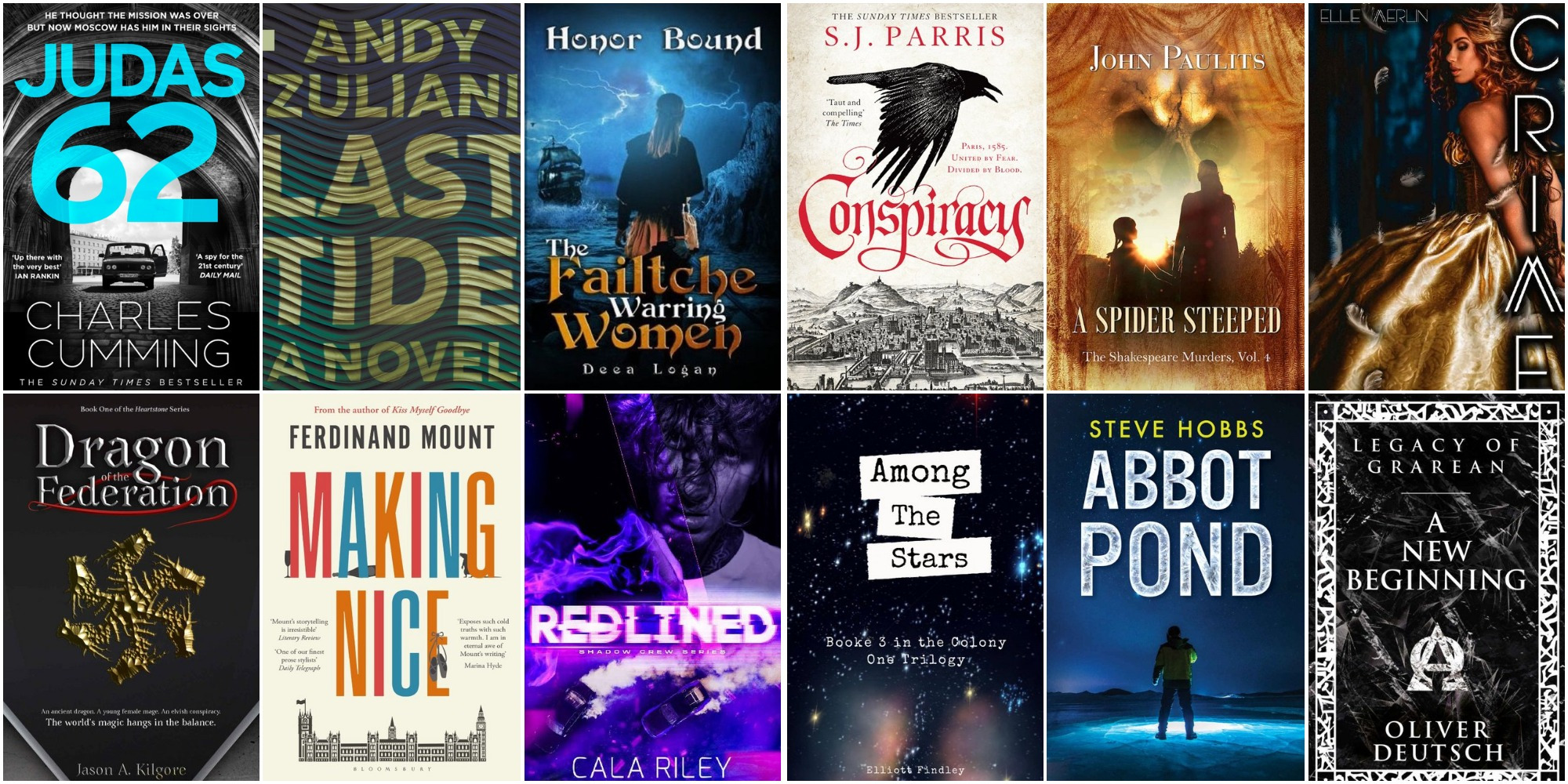 A New Beginning by Oliver Deutsch

A disgraced prince must reclaim his throne. He’s on his own. Or so he thought. Aeneas Renoldus is very different from the other children. He is the prince of the Tainaetor Empire. Living his trouble-free life into adulthood, he becomes a mage.

A Spider Steeped by John Paulits

Mark Louis and Kristy King become involved with murder when they visit Erin Blakely, a college friend of Kristy’s whom she hasn’t seen in half-a-dozen years.

Freddie Morgan loves his life on the snow-covered banks of Abbot Pond. He never wants to leave his adopted home.

Among the Stars by Elliott Findley

With her life’s goal complete Sandra Fay struggles with what comes next. Bringing humanity across the stars Sandra and Nex preparing to be ambassadors must meet with leaders from across the galaxy.

There are old Society rules that separate Winter from the New Society ways in the country of New Dominion. Winter has never broken one. The one person who was on her side, her sister, is gone from this world and Winter wants to give up but she can’t.

For freedom, she’ll risk anything The Tyrant king is dead. Sai, the only one of his bastard offspring of any worth to the kingdom, is summoned back to the palace and into the controlling hands of her half-brother.

Dragon of the Federation by Jason A. Kilgore

How far would you push yourself to save the world? Ingal Jehai is an ancient Gold Dragon who rules over the White Lands Federation, but at over two thousand years old, his age wears on him.

The Kings of this world come and go, as do the ways in which most live. But we chose a different life, a different way, an old way. We are the descendants of warriors who fought for a land free and fair, now we fight for what is lost.

The second book in Charles Cumming’s gripping new thriller series surrounding BOX 88 – a covert intelligence organization that operates beneath the radar. A young spy in one of the most dangerous places on Earth… 1993: Student Lachlan Kite is sent to post-Soviet Russia in the guise of a language teacher. In reality, he is there as a spy.

Ana and Win find themselves stuck, lifting the weight of their pasts, while frustrated by their present jobs: photographing vacant lots and decayed industrial sites, cataloguing the decline of capitalist excess to digitally scrub away humanity to make way for more gentrification.

The eagerly anticipated novel from the bestselling author of A Student of Weather and Garbo Laughs. Harry Boyd, a hard-bitten refugee from failure in Toronto television, has returned to a small radio station in the Canadian North.

Leaving Fairfield is the first book in a YA/NA Contemporary Romance trilogy.Realizing she was in love with her lifelong best friend made junior year life-changing for Allie. She went from nerdy tomboy to capturing the attention of the most popular guy in school.

The deliciously sharp new novel from Ferdinand Mount, author of the Sunday Times Book of the Year Kiss Myself Goodbye Ferdinand Mount’s stinging satire plunges into the dubious world of London PR firms, the back rooms of Westminster and the campaign trail in Africa and America.

Mark of the Void by Amnie Young

If you knew you were going to die, would you still fight? For years Psilyria Kensy Frost has waited for the void to claim her. She never dared hope for a future. Despite this, each day she put on her uniform and fulfilled her role as an elite psionic peacekeeper with the Psionic Security Investigation Corps. ..

Roxanne Racing and Ross are the only two things I thought I could ever count on. That is, until one of them sends me far away, making me lose the other. Now, stuck with a cousin I’m not sure even wants me here trying to pick up the scattered pieces of my life, all I want to do is find my own way.

Snug in Iceland by Victoria Walker

Rachel Richards is stuck in a rut. Her boyfriend Adam barely notices her most of the time and her life in London isn’t as exciting as it should be. When the company she works for, Snug, asks her to oversee the opening of a new store in Iceland, she jumps at the chance for a change of scenery.

Matt Reeves has come home after a spending a few years travelling the world. Now he’s joined the police force. Not long after he finishes his training he’s recruited to work undercover and is assigned to Wellington to find out why methamphetamine has been flooding the streets. At first, he doesn’t like the work.

The Antarctica of Love by Sara Stridsberg

The international star Sara Stridsberg returns with The Antarctica of Love, an unnamed woman’s tale of her murder, her brief life, and the world that moves on after she left it They say you die three times.

The 16-year-old girl disappeared after school on an October afternoon. The police have exhausted all leads. It’s been weeks, but her mother, Barbara, will not stop searching for Melissa.

The Family Tree by S.K. Grice

She thought there’d been no witnesses. She thought he’d never be found. Until the leaves arrived. Jolene Parker wants nothing more than to be awarded custody of her children after her alcoholism and OCD rituals uprooted her family. But when a cold case involving a local man’s mysterious disappearance suddenly re-opens, a secret from her past forces her into a twisted game of lies and deceit.

The Foundation by Steve P. Vincent

A shadowy group is manipulating society. Now, their endgame has arrived. The zealots of the Foundation for a New America have snaked their way into power. Their tentacles are everywhere — the media, big business, Congress and even the White House.

The Goodman Curse by Johan Thompson

Family You can’t live with them But you can arrest them Sergeant Greg Goodman is only good at one thing – his job. He couldn’t even die properly. Now, his first case back from medical leave places him firmly in the crosshairs of the biggest investigation of his life – his family. If he’s not careful, his ass won’t be the only thing on the line.

The Miles Between Cities by Damian Theberge

Some things may change but war never does. Humanity has colonized stars, discovered alien life and staved off an apocalypse of it’s own creation; heroes and legends rose from that galaxy spanning conflict, but now things are stuck in the same day-in, day-out patterns.

The Shadow of Troy by Gordon Doherty

The war at Troy has raged for ten years. Its final throes will echo through eternity… 1258 BC: Surrounded and outnumbered by the army of Agamemnon, King Priam and his Trojan forces fight desperately to defend their city. In the lulls between battle, all talk inevitably turns to the mighty ally that has not yet arrived to their aid.

The Shattered Violin by Jared Bodnar

Conner and his fiancée Cassie had a fairytale love. They complemented each other in every way and looked forward to a perfect future ahead of them. In one day, that future is destroyed. Cassie is brutally murdered, leaving Conner broken, alone, and filled with pain. He knows the pain of this loss will haunt him for the rest of his life. After

To Love and Perish by Ernest Dudley

In Castlebay, North Wales, Dick Merrill is on trial, accused of murdering his wife by administering a lethal dose of arsenic. Merrill, good-looking and attractive, is fatally in love with Margot Stone, who’s herself already married.

E.J. Larson will take you on a joyous ride with this fast paced serial and its twisted secrets Does anyone really care if you disappear? Journalist Delia Gupta had a good life.

When Fishes Flew by Michael Morpurgo

This first new novel in two years from the Nation’s Favourite Storyteller is a sweeping story of love and rescue – an unforgettable journey to the Greek island of Ithaca, and back in time to World War Two…

England, June 1944. Frank Banner has had a long war. Flying his first B-17 mission as a major in August ’42, by the end of ’43, he’s survived over forty missions, has a chest full of medals – including three Purple Hearts – and has steadily risen in rank and position.