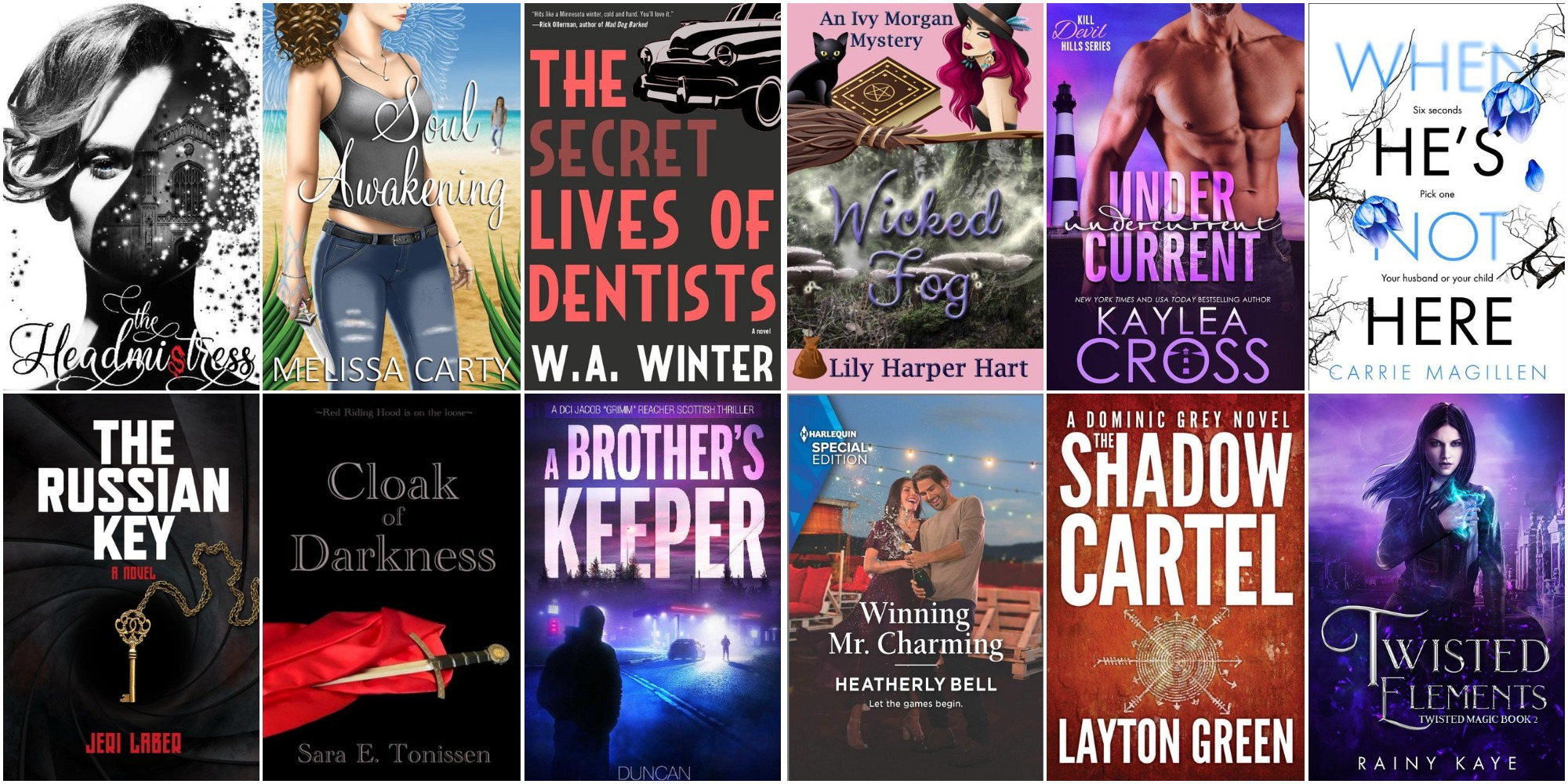 A Brother’s Keeper by Duncan Wallace

In his long career, DCI Jacob Grimm Reacher thought he’d seen it all, but in his last assignment before retirement, he’ll be faced with inscrutable and deadly mysteries: A killer whose DNA evidence points to a soldier stationed at an army camp hundreds of miles away.

Blessed by the Maker. Cursed by the Destroyer. Every life is shrouded in darkness. The continent of Cathal has been threatened by war for eight grueling years, and the seven kingdoms are each determined to rise victorious.

In Charming, Texas, the ultimate contest is underway. Who’ll be the next Mr. Charming? Odds favor Cole Kinsella, owner of the Salty Dog Bar & Grill. The bachelor is certainly handsome and charismatic, especially to his newest employee, and former high school sweetheart, Valerie Villanueva. Except…Val’s in the running, as well.

Fall is here and Ivy Morgan is excited. Halloween is her favorite time of year and all she wants is to share her good mood – and three little words – with her boyfriend Jack Harker.

When He’s Not Here by Carrie Magillen

“ A proper mind-blowing page-turner.” – ELIZABETH HAYNES (Into The Darkest Corner) Eva can save herself and her unborn child … by shooting the love of her life. Could you? Will she? It’s time to find out. What readers are saying about WHEN HE’S NOT HERE: “Just when you think you’ve got it all figured out…wow! I totally didn’t see that coming. A fantastic debut novel, I can’t wait for the next one!” –

CRIMSON POINT FANS WILL LOVE THE KILL DEVIL HILLS SERIES! She’s looking to reinvent herself. After the worst two years of her life, Aspen Savich has just moved across the country to the Outer Banks, looking to start over and leave her painful past behind.

Safiya’s quest to find Fiona leads her right into the heart of the next battle, this time in New Orleans. She and Randall intend to get in and out. Instead, they wind up hostages of a local man who has a different idea for her broken magic.

The Shadow Cartel by Layton Green

The fourth book in the bestselling, critically-acclaimed, optioned-for-film Mystery & Thriller series. The sins of the past always return… The General. A name whispered in hushed tones among the criminal underworld, from Miami to Buenos Aires. A name even the drug cartels fear. Yet the General is a man without a face.

The Secret Lives of Dentists by W A. Winter

In 1955, small-town girls flock to Minneapolis for work, love, and adventure. But Teresa Hickman, from Dollar, North Dakota, is a special case. Beguiling. Promiscuous.

The Russian Key by Jeri Laber

“An intriguing spy novel written in the form of a memoir . . . Those seeking a fresh take on the genre will be satisfied.”—Publishers Weekly An exciting debut for fans of The Americans and Red Sparrow. In 1964, at the height of the Cold War, Kate Landau, a young American expert on Russia, joins the CIA.

The Headmistress by Milena McKay

A chance encounter. An unforgettable night. And back home, trouble is brewing on the remote island of Three Dragons, where nothing feels like it used to. Alone and lonely, Sam Threadneedle wishes upon a star, hoping for change. But when said change comes, it’s with a roar and not a whimper.

The Girl He Used to Know by Tracey Garvis Graves

New York Times bestselling author of On the Island, Tracey Garvis Graves, presents the compelling, hopelessly romantic novel of unconditional love. Annika (rhymes with Monica) Rose, is an English major at the University of Illinois. Anxious in social situations where she finds most people’s behavior confusing, she’d rather be surrounded by the order and discipline of books or the quiet solitude of playing chess.

After Skylar Morgan’s father goes missing, she didn’t think life could get any worse. She was wrong. Her summer plans are shattered when her mother suggests they spend the summer with family. So instead of being with her friends, she’s stuck in another country where she doesn’t know a soul. All families have secrets, but most don’t involve otherworldly beings. Then, there’s Chance.

In December 1941, the surprise attack on Pearl Harbor plunges the United States into war. Fresh from the hardscrabble mountains of Appalachia, Deacon Cole joins the fight against Imperial Japan. In his first test against the enemy, he will use all his skill with a rifle against a deadly Japanese marksman. Across the beaches and jungles, they take part in the savage battle for control of a Pacific island. Can he protect his squad, or will they fall, one by one, under the enemy’s crosshairs?

One Foot in the Grave by Davis Grubb

Once Upon a Cowboy by Rachel Lacey

A TALE AS OLD AS TIME Megan Perl went from beauty to beast when a car accident left her permanently scarred. Before, Megan was outgoing and vivacious, always with a man at her side. Now? She spends more time behind a camera than in front of it.

It’s the annual garden gnome contest and all of Peachwood is a flutter with excitement. Especially Malene, who intends to win this year’s golden gnome award. But plenty of others in town want to win, too, and when Malene’s main competition throws a monkey wrench in her plans for victory, she comes up with her own plan to win.

Kiss The Sky by Elizabeth Briggs

To unlock her powers she must mate with four sexy dragon shifters. One down, three to go… I’m done hiding. I’ve stopped running. And I’ve finally accepted my destiny—to take four dragon shifters as my mates so I can become the next Black Dragon, the wielder of all the elements.

Kings of America by R.J. Ellory

Fleeing to America following a terrible crime, Irish-born fighter, Danny McCabe, throws in his lot with Nicolas and Lucia Mariani, siblings who have emigrated from Corsica in search of their fortunes.

It Takes Heart by Tif Marcelo

From romance author Tif Marcelo comes a heartwarming story about taking a second chance on love at a family-owned couples resort. Heart Resort, a private resort in the Outer Banks, is a romantic getaway for couples but a hotbed of family drama for its proprietors, the Puso family.

At first suspecting I was merely adopted, life took a strange turn and in a matter of days I was introduced to not one alien species but three.

Graded for Murder by K.D. Upton

Murder is on the menu. Professor Shaw’s mystery dinner party started with a bang. From fedoras to flapper dresses and succulent shrimp to whiskey, the evening quickly turned sinister.

Goddesses of War by Shantung Jones

Four traveling warriors fixated on revenge and renewal, must traverse the wilderness of Titan. They must do so while avoiding the lightning bolts within this barren wasteland that kill instantly, as they home in on their every move.

Their love could change the world… Swan shifter Maggie Ross adores her life as a professional wrestler at the top of her game. But like every gladiator shifter, whose ancestors once fought, and bonded with, the beasts of the Roman Colusseum, Maggie is bound by magic to abide by the will of the ringmaster family who once ran the arenas, and now run the world’s largest professional wrestling corporation.

It’s the first-ever Halloween party at OTKE Corporation. All the party-goers are having a great time, and Mr. Hunt kicks it up with spooky stories from his childhood. Too bad for Mr. Hunt, the horrors of Halloween are about to become real.

After a harrowing experience in the forest outside the Academy, Alec is ready to resume his studies He’ll have to juggle new classes in Combat Magic and Familiars & Their Care, as well as a budding relationship with the young elf woman, Eleira Leafwalker.

Sarah Collins is forced to call her ex because their daughter needs his rare blood for an operation. Thing is, he doesn’t know he’s a father. Dawson Collins, nick-named Dos for his computer expertise, married Sarah for revenge against her father.

A Cyberpunk Saga Box Set by Matthew A. Goodwin

He has discovered their terrible secret, but can he take down the world’s largest mega-corporation before it’s too late? This epic box set contains the first three books of the bestselling A Cyberpunk Saga with bonus content. INTO NEON Moss’ life is going nowhere until a mysterious woman knocks on his door and leaves him with the key to take down one of the world’s largest corporations. When he discovers a familial connection to the stranger, Moss leaves the comfort of his home with his best friend for the sprawling megacity.

Among the Living by Timothy W. Long

THE DEAD WALK The real battle for Seattle begins in this pre-apocalyptic thriller When a supposed gas leak causes the National Guard to forcibly evacuate a Seattle neighborhood, Lester isn’t going anywhere. The former dope pusher has a new clientele…

Advent of Turmoil by Jennifer Felix

What would you do if you woke up in a strange realm where life and death is determined by the amount of HP you have left and your ability to fight against monsters? For Kayla, getting whisked to a world with a video game-like environment was both terrifying and exciting. She realized she could put her Kali training to actual use and kick monster butt along the way.