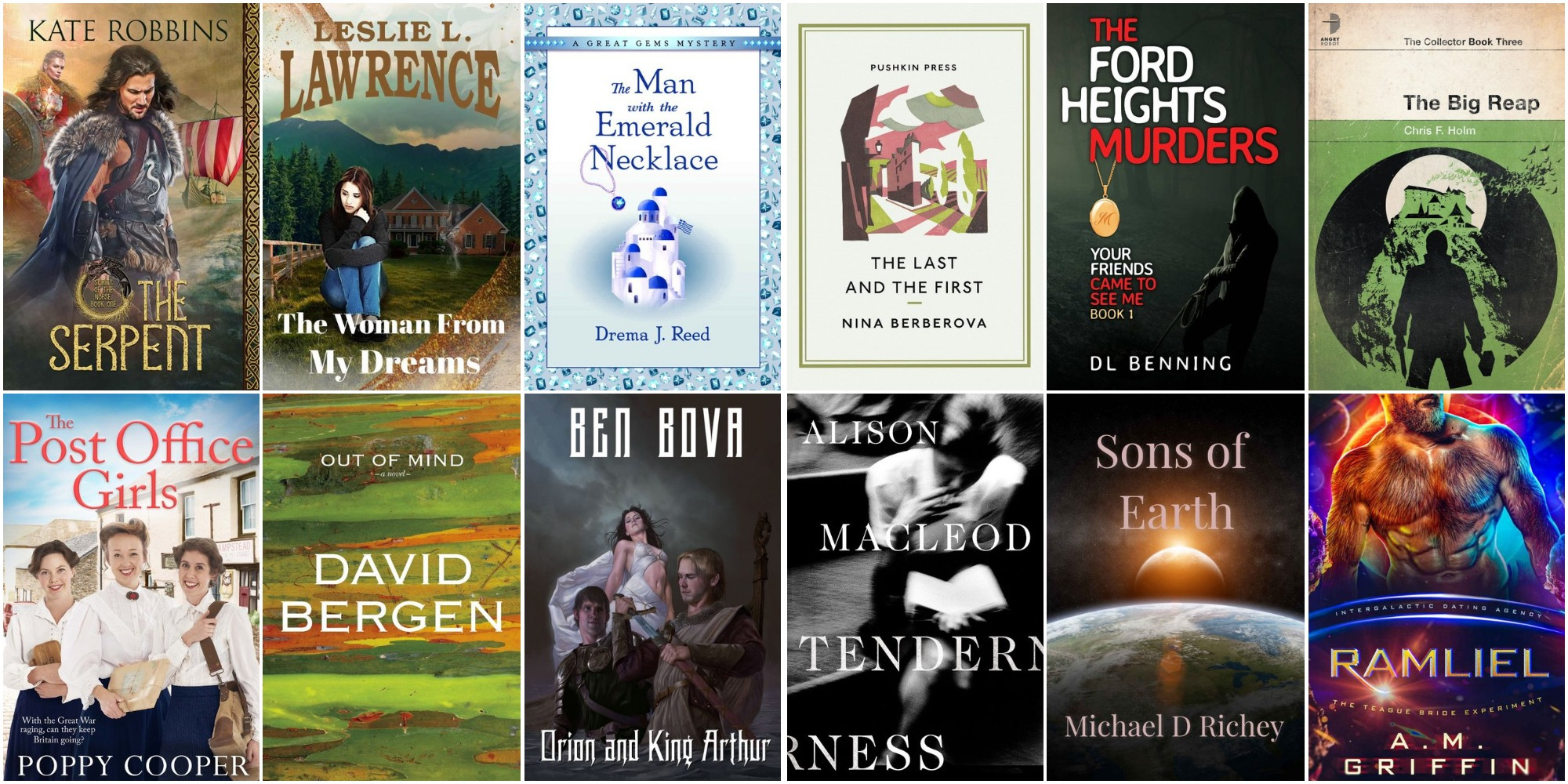 Orion has fought across time and space at the whims of his Creators, godlike beings from the future who toy with human history like spoiled children playing with dolls.

Out of Mind by David Bergen

“Bergen’s power as a writer pulls like an undertow… An uncanny, discerning, merciful algebra on what love takes, and where it leaves us.” — Paige Cooper In Out of Mind, David Bergen delves into the psyche of Lucille Black, mother, grandmother, lover, psychiatrist, and analyst of self, who first appeared in Bergen’s bestselling novel The Matter with Morris.

The Woman From My Dreams by Leslie L. Lawrence

Debby O’Hara is just an average teenage girl whose life turns upside down when some lady in vintage clothes appears in her room one night and starts yelling at her in a strange language. Is she a ghost? Or just a vision, a dream that Debby keeps having? Because she just can’t seem to stay away.

With the Great War raging, can they keep Britain going? 1915. On Beth Healey’s eighteenth birthday, she hopes that she will be able to forget the ghastly war and celebrate.

The Man with the Emerald Necklace by Drema J Reed

The Listener by Rachel Basch

Malcolm Dowd is almost positive he recognizes the freshman who shows up for a session at his office in Baxter College’s Center for Behavioral Health—he just can’t place her. When suddenly she stands, takes off her wig, and reveals herself as Noah, the young man Malcolm had been treating months earlier, it marks the start of a relationship that will change them both.

The Last and the First by Nina Berberova

The first English translation of celebrated Russian writer Nina Berberova’s debut novel: an intense story the struggle over the future of émigré life On a crisp September morning, trouble comes to the Gorbatovs’ farm. Having fled the ruins of the Russian Revolution, they have endured crushing labour to set up a small farm in Provence.

Introducing investigative medium Lynn Monroe. Lynn is a self-taught medium who channels inspiration and affirmations for her blog. Her quiet life is thrown into disarray when her estranged and aging Uncle Fred insists that she take over his estate. Lynn’s gifts as a medium soon reveal Uncle Fred’s sinister past. Settling his affairs takes on new meaning when his departed victims seek Lynn’s help in solving their decades-old murders.

The Collector Book Three Who Collects the Collectors? Sam Thornton has had many run-ins with his celestial masters, but he’s always been sure of his own actions. However, when he’s tasked with dispatching the mythical Brethren – a group of former Collectors who have cast off their ties to Hell – is he still working on the side of right?

“What a triumph of skill and imagination is this powerful, moving, brilliant novel! I’ve never read anything quite like Tenderness, and I doubt I ever will again.” —Elizabeth Gilbert, bestselling author of City of Girls and Eat, Pray, Love For readers of A Gentleman in Moscow and Z: A Novel of Zelda Fitzgerald, an ambitious, spellbinding historical novel about sensuality, censorship, and the novel that set off the sexual revolution.

Archeologist Dr. Emma McGowan discovers a mystery atop Arizona’s Mingus Mountain inside an unmapped stone crevice – a shaft that makes no sense, nothing formed in nature, so it must be from the world of man. Emma is driven to learn where it came from, built by whom and why? And most importantly, when? As NASA’s Artemis II mission makes final approach to Earth’s red neighbor, transmissions end for no reason.

The Yatur sent a spaceship to Earth with a seemingly simple exchange. They would provide humans with advancements in technology for medical and scientific purposes, and the only thing humans had to give in return were women.

The U.S. started it by abducting a Russian spy. How will the Russians retaliate? And when?

Pahua and the Soul Stealer by Lori M. Lee

Best-selling author Rick Riordan presents Lori M. Lee’s middle grade debut about a lonely Hmong girl who discovers she’s a powerful shaman warrior in this fantasy inspired by Southeast Asian mythology. “I love the adventures Pahua has in this book.

“No guns. No resources. No aid. No nothing. And I’m supposed to be the hero? I’m as good as dead.” Gnath Fist is uploaded onto a cloned variation of Earth. As he adjusts to his new circumstances, he’s briefed on his first mission: To liberate the city of Mahns-a-Lore. In order to be successful, he is given a Mech Core and acquires the Cymech class.

A woman impersonates a nun online, with unexpected consequences. In a rapidly changing neighborhood, tensions escalate around two events planned for the same day.

Before I died, I was just an ordinary man. Now, I am an orc chieftain. The evil Count Domallius has enslaved half the magical beings of the land and used them to exterminate the rest.

My True Love Gave to Me by Jackie Barbosa

Walter and Artemisia Langston have been blissfully married for three years, but Artemisia has found the role of a small-town vicar’s wife somewhat less than fulfilling.

Life After Life by Kate Atkinson

What if you had the chance to live your life again and again, until you finally got it right? During a snowstorm in England in 1910, a baby is born and dies before she can take her first breath.

When DS Sexton of the Devon and Cornwall police is asked to look into an eight-year-old cold case because a dead dog was found on Dartmoor, he’s not overly thrilled.

How far would you go to ruin the person who ruined you? This is the story of Heather Chang. A fiery, quick-tempered high school student who lives in the fictional small town of Gillwood, Florida. She enjoys reading, creating memes, and getting revenge at anyone who wrongs her in any way.

In the court of the King, everyone knows their place. But as the Artist wins hearts and egos with his ballads, uncomfortable truths emerge that shake the Kingdom to its core. Part surreal fable and part narco-lit romance, this prize-winning novel from Yuri Herrera questions the price of keeping your integrity in a world ruled by patronage and power.

King in Waiting by Alex Marchant

1486 These are dangerous days for the Order of the White Boar King Richard III has been betrayed and killed Victorious Henry Tudor sits uneasily on the throne of England Richard’s loyal friend, Francis Lovell, plots revenge Alys Langdown, ward of the Queen, awaits an unknown fate And ever-loyal Matthew Wansford serves his new master, Edward Plantagenet, true King of England – who now must seek his own road … From exile in Flanders to an uncertain welcome over the sea – what challenges lie ahead for the Order and for the King in Waiting?

Keeping the House by Tice Cin

The Turkish variety are prized for their enlarged leaf bud; that’s where we put the heroin . . . Ayla has a plan. There’s a stash of heroin; just waiting to be imported. No one seems sure what to do with it; but Ayla’s a gardener; and she knows.

If I Bring You Roses by Marisel Vera

“I believe in Spirits,” Felicidad said. “I believe in making love,” said Aníbal. In a small town in Puerto Rico, Felicidad Hidalgo spends her days serving busybodies in her aunt’s bakery, and her nights dreaming of home. Closing her eyes she can almost hear the sweet songs of tree frogs, reminding her of the mountain village of her childhood, and the family she hasn’t seen in nearly a decade.

How to Win a Slime War by Mae Respicio

Front Desk meets The Lemonade War when two kids face off in an epic battle to see who can sell the most slime, while navigating sticky situations with friends and family. Alex Manalo and his dad have just moved back to Sacramento, CA to help out with their extended family’s struggling Filipino market.

Ex-US national rock climber Leslie McAllister finally has her life right where she wants it. When she’s asked to accept a new position in Boston, she must decide whether to stay in her comfort zone or take a leap and trust she’s anchored herself well enough to not fall.

August into Winter by Guy Vanderhaeghe

The first novel in nearly a decade from the three-time Governor General’s Award‒winning author of The Last Crossing, August Into Winter is an epic story of crime and retribution, of war and its long shadow, and of the redemptive possibilities of love.

Jeremy’s mom will die in one year. He’s a time traveller, and a necromancer. He can save her. If she’ll let him. Everyone knows how these things work. If a butterfly flaps its wings, it causes a tsunami. But saving an entire life? That’s a way bigger impact than the flight of a butterfly. Melissa isn’t wishful for death.