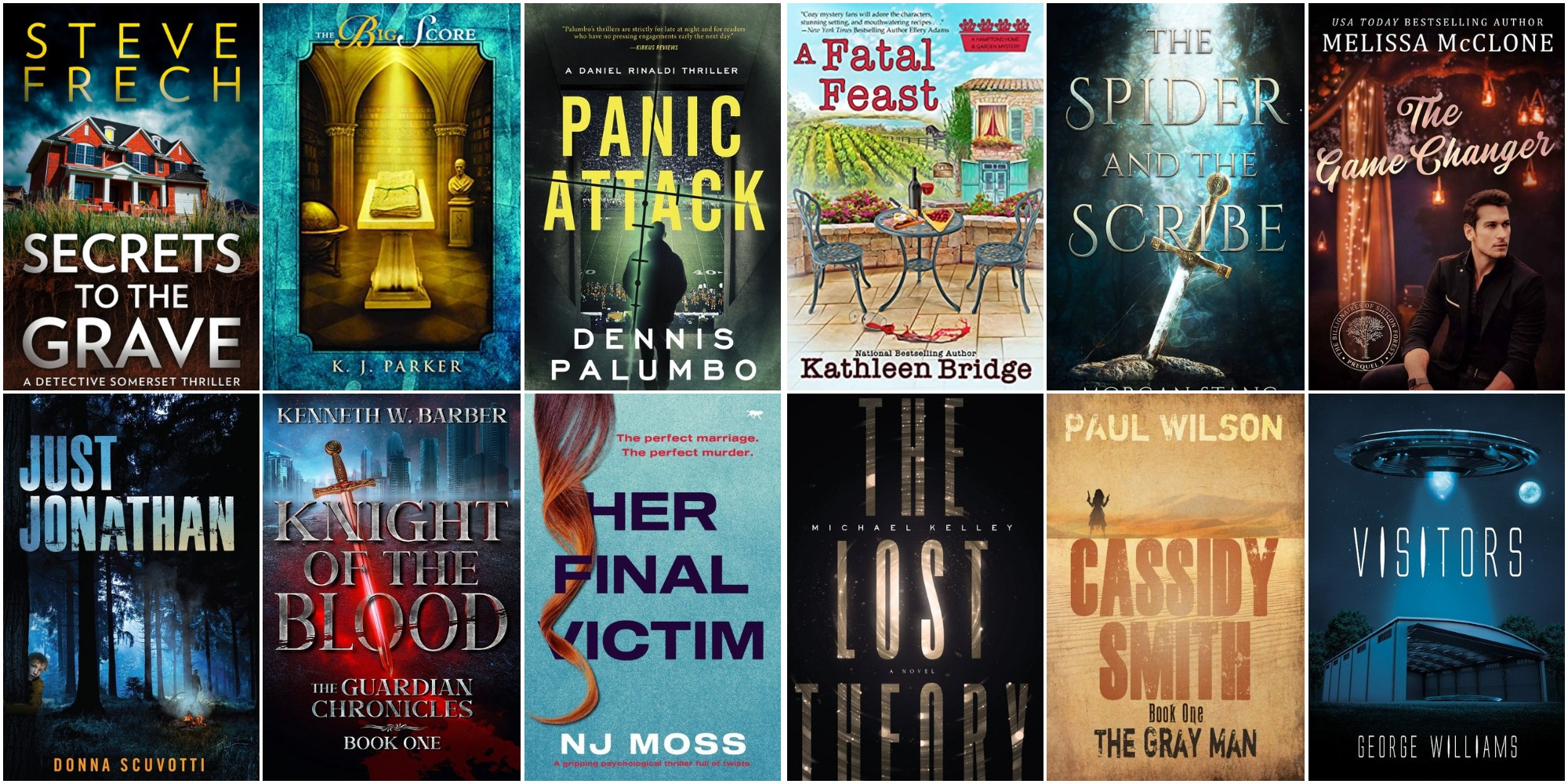 A Fatal Feast by Kathleen Bridge

“Not only will cozy readers be dazzled by the luxury homes, rare antiques, and killer cuisine in the Hamptons Home & Garden mysteries, but they’ll also find a new favorite sleuth in interior designer Meg Barrett.”

The Spider and the Scribe by Morgan Stang

As far as Harriette Cooke is concerned, a little lie or two never hurt anyone. A down-on-her-luck scribe and the sole provider for her family, she struggles to get by in a city that turns a blind eye to the poor.

What Happens in Denver by Liz Crowe

Meet Andi Rigby. She and her husband own a famous bar. Andi can mix a cocktail, change a beer keg, soothe ruffled customers, and drink you under the table.

Ian Page knows nothing of the bizarre and sinister events taking place on the abandoned airbase – incidents so secret and revelatory, their very existence has been denied from the world for fifteen years. But he is about to find out.

A Calculated Whisk by Victoria Hamilton

In the new Vintage Kitchen Mystery from the author of Cast Iron Alibi, Jaymie Leighton is confronted with two murders and the threat of danger far too close to home . . .

The Lost Theory by Michael Kelley

Embark on a thrilling international quest to unlock the mysteries of the universe. Sean McQueen is a staid, middle-aged NYU literature professor leading an uneventful life, until he receives a cryptic letter from his intellectually and poetically gifted best friend, Dylan Byrne.

The Keening by Anne Emery

The murdered body of Sorcha the prophetess is discovered following a lavish banquet at the Maguire castle in 16th-century Ireland. In the present day, a dig commences on the land, and not only is a body discovered, but a sheaf of prophecies.

The Gray Man by Paul Wilson

Book One: The Gray Man 18-year-old debutant Cassidy Smith returns from a summer party to find her home burned and her family murdered. Fueled by a need for revenge, she journeys across a weird and haunted western landscape, all the while pursued by a powerful Magician on his own mission of revenge.

A young Kozak soldier in the far future faces a dilemma when the ‘Five-Self’ Empire he is employed by begins to persecute a minority group that has befriended him. Not only that, but his superiors order him to take part in the persecution. Steady in development, the story picks up pace and tension as the internal and external conflicts come to a head.

The Big Score by K.J. Parker

Welcome to the world of Saloninus, the most unlikely Renaissance Man you will ever encounter. A man of many and diverse talents, he is the hero and narrator of K.J. Parker’s witty, hugely entertaining novella, The Big Score.

Secrets to the Grave by Steve Frech

The woman recoiled as she rolled the body onto its back. Deep bruises encircled the neck, but the most unsettling feature was the eyes, which stared lifelessly upwards.

A shooter takes deadly aim, and throws a city into panic Psychologist Daniel Rinaldi is no stranger to trauma.

Miss Elkins and the Invisible Horse by Sahara Kelly

Trusting in science isn’t always easy, but sometimes trusting your heart is even harder…

Madeline Denham realizes something doesn’t add up. More than with her siblings, her parents are very careful about whom they allow to socialize with her.

Knight Of The Blood by Kenneth W. Barber

Griffin, an expert wiseass, has never experienced true horror until his father is killed by a foul beast that certainly seems like but is, apparently, not a werewolf—according to the knight who saves him from the same fate, anyway.

Reeling from the death of his beloved mother, at the hands of a drunk driver, thirteen-year-old Jonathan is struggling with the aftermath, while living with an abusive, alcoholic father.

Sparks flew after she nearly drove into him. Will their chance encounter forge the love of a lifetime? Jenna Campbell has always put her career first. So she’s eager to let her hair down at a weekend getaway with three girlfriends in the Scottish Highlands.

Influenced to Death by Bonnie Hardy

Olivia Greer dreads returning to Lily Rock. But the dead tenant on her doorstep has made the trip a necessity. Without a doubt, reconnecting with the people she abruptly abandoned a year ago will be agonizing.

A gripping standalone thriller from the No.1 bestselling author of Little Bones and The Dark RoomAs temperatures soar across Europe during the hottest summer for forty years, a series of hoax terrorist attacks is generating panic in London.

Her Final Victim by NJ Moss

With friends like these, who needs enemies? A twisting psychological thriller about what lies behind a marriage’s façade—and the deadly results . . . Hazel and Jamie are happily married.

Hear No Evil by J.P. Choquette

“If I’m not here to help the next person, who will be?” Tayt Waters doesn’t try to get herself into hair-raising predicaments, it just happens. Returning to work at her security firm following an unexpected medical leave, Tayt finds herself starring in a whole new round of adventures.

Hard to Kill by Kati Ella

Meet Ambrosia Harding, aka Rosie, an assassin working for OVERSIGHT. She’s ready to swap the guns and murder for a beach towel, balmy nights with cocktails, the sand between her toes, and time to indulge in a romance novel.

“ Do you believe in love at first sight, or should I hit you with my bike again?” Can a vacation romance turn into a happily ever after?

Saint might be my last name, but they’re determined to make me into a sinner. My father is dead. My home is ash. And my mother and I are one step away from death ourselves.

What is the formula for love? Architectural engineer Mae Adams lives by her checklists –and she has them for everything from her sustainable housing project to her sex life.

Countdown to Dawn by Brett Hoeppner

There will be death at first light. It’s time to arm-up! In the thrilling sequel to Armed Instinct, former freedom fighters Faith and Grayson are thrust back into vicious conflict with the powerful tech corporation, Bio-Yomi. Bloodied and beaten from their previous battle, they must struggle against the overwhelming force of the corporation as it holds nothing back to destroy them.

She ’ s a determined newswriter. He ’s a laird’ s son. But they have a secret in common, and passion is heating up … Allison Grant revels in breaking the biggest stories.

A Killer Welcome by Dionne Lister

From the USA Today bestselling author of the Paranormal Investigation Bureau Cozy Mystery Series. Avery Winters was overjoyed to be brought back to life… unfortunately, the dead were waiting for her.

What does it mean to be a gay man in America today? This diverse collection of stories chronicling the challenges of gay life at various ages shines a light on the progress made and the progress still to come as family expectations, cultural norms, and religious practices continue to influence gay self-perceptions and out and proud identities in America.