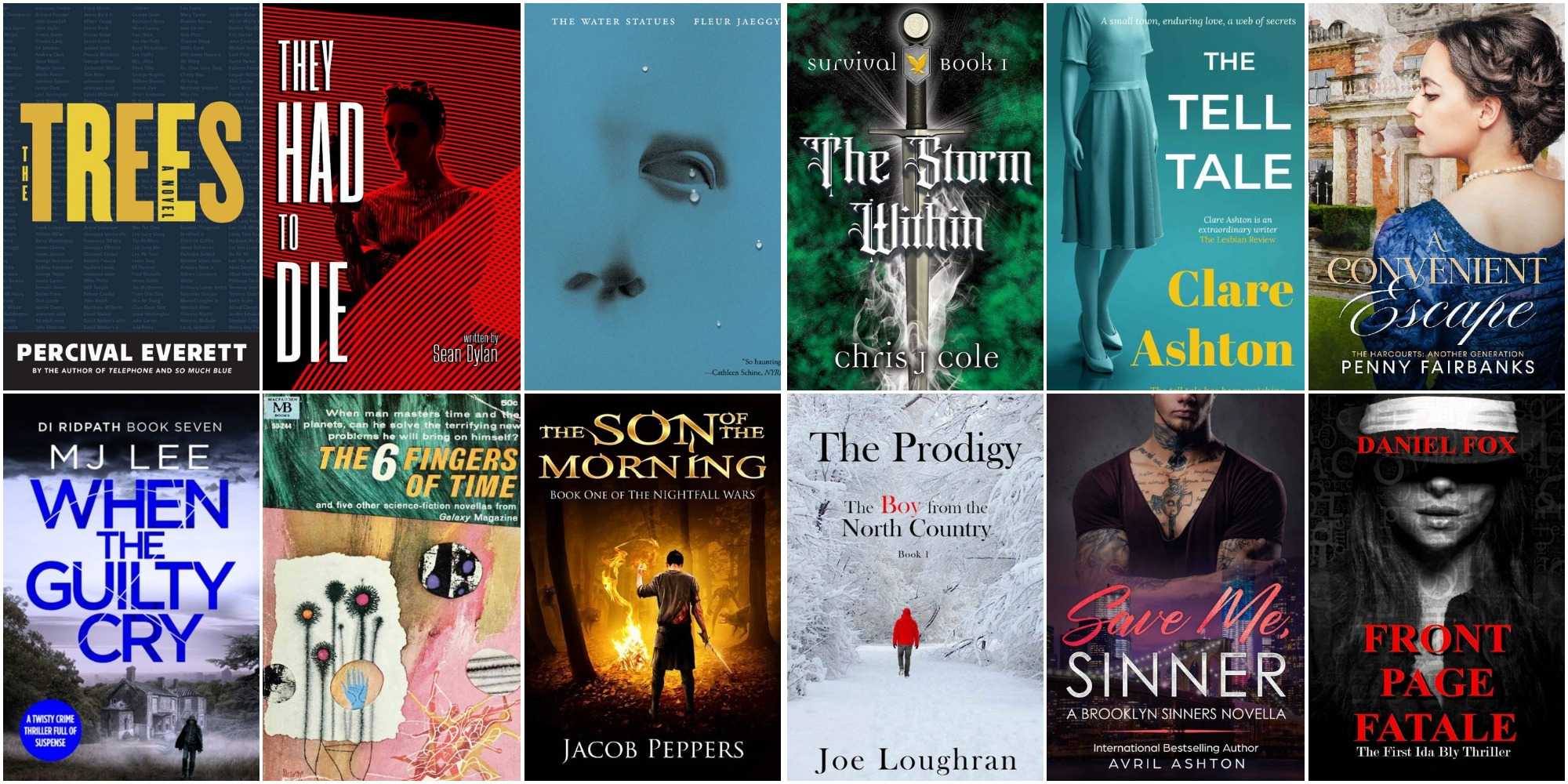 The Six Fingers of Time by R.A. Lafferty

The Son of the Morning by Jacob Peppers

Fifty years ago, the nightwalkers appeared, creatures of shadow and darkness, thirsting for blood and death. Thousands died and the kingdom of Entarna was brought to its knees.

When the Guilty Cry by M.J. Lee

Three severed hands. No clues. A race against time… Three embalmed hands are discovered in a disused Victorian house. Is it a gangland ritual? The work of a cult? Or just a prank played by Medical Students? And what happened to the bodies? Meanwhile the Coroner needs to issue a Presumption of Death certificate on a teenage girl who vanished eleven years ago in mysterious circumstances.

They Had To Die by Sean Dylan

A Russian cargo plane is hijacked in Siberia with over one billion Euros of uncut, flawless diamonds and precious gems on board. The Kremlin suspect the hijackers are Russian Mafia and former Chechen Separatists.

The Water Statues by Fleur Jaeggy

Family, obsession, and privilege boiled down by the icy-hot Swiss-Italian master stylist Fleur Jaeggy Even among Fleur Jaeggy’s singular and intricate works, The Water Statues is a shiningly peculiar book.

The Trees by Percival Everett

An uncanny literary thriller addressing the painful legacy of lynching in the US, by the author of Telephone Percival Everett’s The Trees is a page-turner that opens with a series of brutal murders in the rural town of Money, Mississippi.

The Tell Tale by Clare Ashton

A small town, enduring love, a web of secrets. The Tell Tale has been watching and waiting, because there’s something queer about the village of Foel. Beth Griffiths has returned home to raise her daughter in the Welsh hills.

The Storm Within by Chris J. Cole

Being a teen is already hard. Throw in the fact that in another realm, you’re considered the missing piece to destroying a powerful vampire, and you have a glimpse into the life of Daniel Smith.

A Convenient Escape by Penny Fairbanks

She’s a romantic who failed to fall in love in her first Season. He likes a friend who sees him as nothing more. When life doesn’t go how either of them planned, they strike a convenient deal. With so many examples of true love to look up to, Miss Elizabeth Waynford is certain that her future holds the same.

The Lessons of Magik by S.L. McGinnis

Following a nuclear fallout, magik starts to surface in the world again. The leader of the only surviving city in North America, Angel, has taken her people prisoner. Kara McKenzie, is a sixteen-year-old girl living in Yorklyn City.

The Prodigy by Joe Loughran

Is the greatest secret in all of human history worth dying for? When Rick Wilson, a treasure hunter desperate to make his mark on the world, discovers an ancient dagger in a cave on the Scottish coast, all is not as it seems.

Trick Albright and a group of eccentric Southerners make a pact to decode the mysterious Voynich Manuscript for a $3BLN prize.

Lexi Mazur is a depressed, alcoholic, pill-popper whose only joy has become her reality TV shows, often fantasizing that the people on TV are a part of her world.

Save Me, Sinner by Avril Ashton

With his lover in danger, Pablo sets out to do what he does best…damage.

Royal Fire is Book Two in the Fate’s Stays series. The series does need to be read in order as there is a plot that connects from book to book. This book follows our favorite dragon and how he finds his fated prince. Blaze: I came to the capitol to bring my brother his belongings since he was settling in with his mate in the palace.

Purebreds and Purrjury by Molly Fitz

Do a good job, and they give you even more work. I’m not sure why I expected anything different from the goody two-shoes jerks at the Magical Corrections System.

Kill Your Heroes by Slade Grayson

Eddie Marr never planned to be a supervillain, but it seemed like a surefire way to become rich and famous. All he had to do was come up with a flashy costume, a signature gimmick, and commit a couple of high profile (yet nonviolent) crimes. Eddie figured he’d eventually get caught and spend a year or two in a minimum security prison. Then he’d write a tell-all book, do the talk show circuit, and parlay that into a regular TV hosting gig. But the best laid plans…

Evie Corwin never wanted to come home. But back in Cape Luna for a family funeral, she soon finds that the wolf pack is as insufferable as ever. None more so than Jamie Hart. Or is he? Something seems diffrent about him that Evie can’t ignore. But can wolves really change? Has he? Nothing is as it seems in the wolf pack. TWs: Explicit sexual content, curse words, scary or possibly terror inducing depicitions.

She’s hated by the police. Blackballed by her newspaper. And in the crosshairs of a monstrous killer. L.A. 1947. The body is posed, brutalized… and a sure-fire way for reporter Ida Bly to get back her spot on the front pages. Willing to do anything to stay ahead of the police and her fellow reporters, the hunt for a killer warps into an obsession to give a dead woman back her name.

In the distant future, the world is no longer habitable. Humanity is forced to live in a city of towering Spires where the air is artificially-produced, food is grown in greenhouses, and companies compete to blanket a dreary existence with projections of neon lights and mockeries of Old World cities we once lived.

The Republic’s AI controls a clone on one planet. The League controls a bot on another . . . Jade Thrall is the League’s Tetrarch but she holds a secret even she does not realize. She is a highly advanced droid, formerly known as Miriam.

An amateur sleuth named Bonnie and her kitty companion Clyde, with names like those, what could possibly go wrong? Life hasn’t sparkled too brightly for Bonnie Balfour over the past few years, but a heart-breaking divorce has brought her back to her small rural hometown of Bliss, Georgia, and things are starting to shape up.

“If you like Florida-based eco mystery-thrillers with action and insight, put “Bottom Feeders” by Leelon Edwards on the top of your reading list.” — Michael Lister, New York Times bestselling author of the John Jordan Mystery Series A crabber calls the Florida Wildlife Commission office in Panama City, there is a man tied to his crab trap at the bottom of West Bay. Drew Phillips, Florida Wildlife Commission officer, and his partner, Javier, are called to investigate what appears to be a murder with a gruesome but efficient method of eliminating evidence.

Beneath the Marigolds by Emily C. Whitson

When her close friend, Reese Marigold, goes missing after attending Last Chance, an exclusive singles’ retreat on a remote island off the coast of Hawaii, no-nonsense lawyer Ann Stone infiltrates the retreat.

ANASTACIA BABCHUK IS NOT THE KIND OF FRIEND YOU WOULD WANT TO HAVE. SHE KILLS PEOPLE SHE DOES NOT LIKE… AND ANOTHER THING, NEVER CALL HER CHOOK.

Beast World by Will Hawthorne

Build a base. Gather resources. Protect your companions. Fight mythical beasts. After a near-fatal accident, Charlie Miller wakes up from a coma to find the world in tatters.

Steamy. Relentless. Forbidden. Tall, dark and unforgivably sexy, Professor Luke Huntington didn’t fit the profile of a university lecturer. At all. With a criminal past and a suggestive twinkle in his eye, he was much better suited to being a bad boy than a teacher.

A Hex of Wolves by Kate Krake

Life might be tricky for Belinda Drake, what with her nemesis, Rowan Jackfort back in town and her bookstore closing in on financial ruin, but at least she still has her friends, her cantankerous feline familiar, and her boyfriend, Blackthorn Springs’ hottest non-practicing werewolf, Conri O’Farrell.

A Promise in the Keys by Hope Holloway

There’s a little island magic in the air…and the promise of something brand new. With her daughters more settled than ever, it’s time for Beck to live her life in Coconut Key to the fullest. Coquina House Bed & Breakfast is open and running, and with every new challenge, Beck and her mother discover they were born for the life of hospitality.