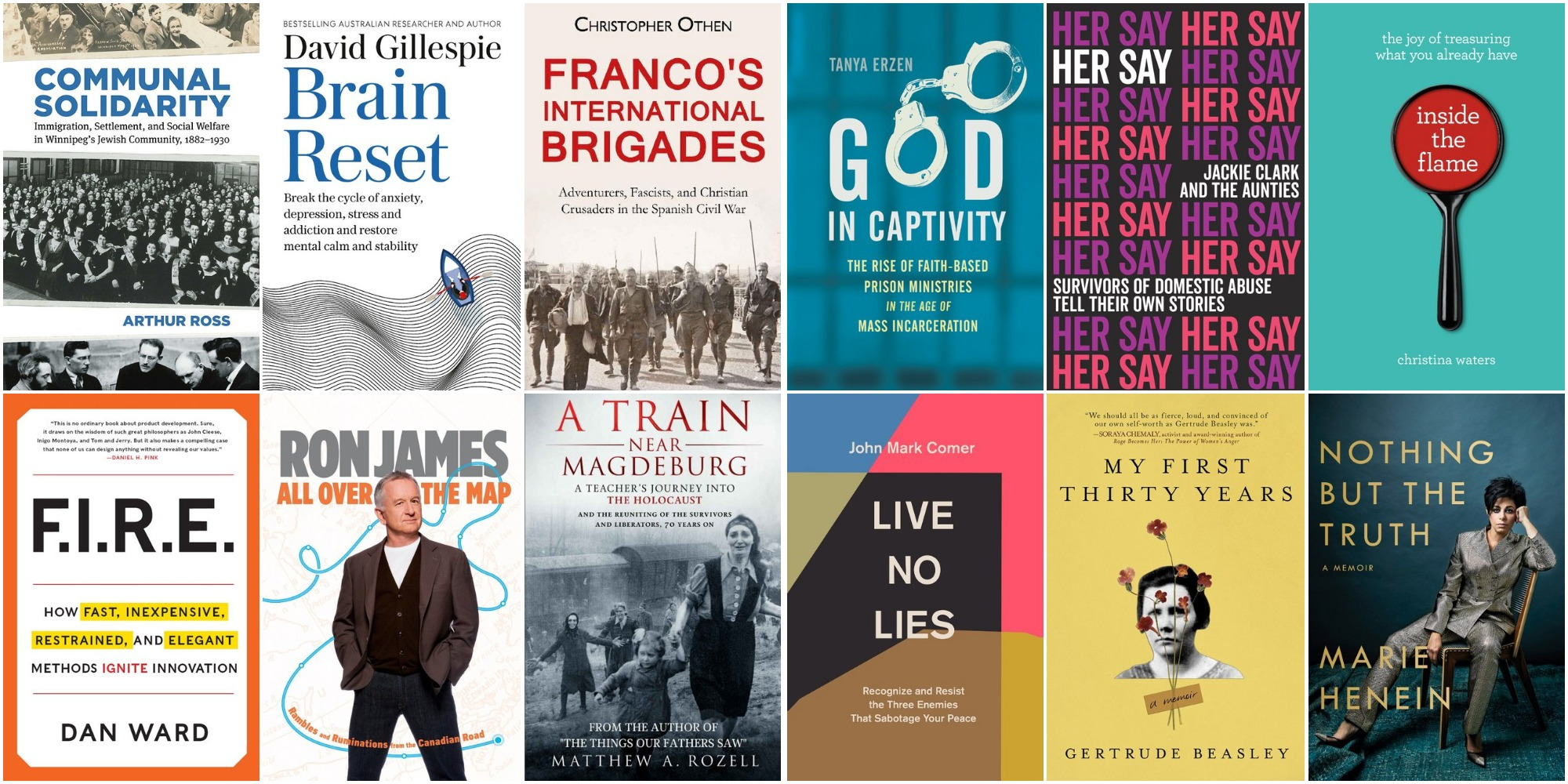 A Train Near Magdeburg by Matthew A. Rozell

What do you do if you are a reluctant soldier, having been shot at, seen your friends killed, and can no longer even remember what your own mother looks like?

All Over the Map by Ron James

Canada’s most verbally virtuosic comic makes his literary debut—and he’s just as richly, uproariously funny on the page as on stage. His legion of fans—the ones who ensure his every show the length and breadth of Canada is a sell-out—recognize Ron James as one of the great stand-ups of his generation. His seemingly improvisational flights of fancy—no two shows are ever the same—are crammed with inventive phrase-making, feature a vocabulary Donald Trump could only fantasize about and put every word into the service of uproarious comedy.

From the bestselling historian and acclaimed broadcaster Jeremy Paxman Where would Britain be without coal? In brilliant social history, Jeremy Paxman tells the story of how the black stuff has shaped every aspect of Britain. Coal is the commodity that made Britain.

Anxiety, depression and addiction are the scourge of modern-day living. How are they linked? How do we beat them? According to bestselling author and researcher David Gillespie, we are more addicted than ever before, which is playing havoc with our dopamine levels.

Between 1882 and 1930 approximately 9,800 Jewish immigrants from Eastern Europe settled in Winnipeg. Newly arrived Jewish immigrants began to establish secular mutual aid societies, organizations based on egalitarian principles of communal solidarity that dealt with the pervasive problem of economic insecurity by providing financial relief to their members.

Noted military technology expert Dan Ward’s manifesto for creating great products and projects using the methods of rapid innovation. Why do some programs deliver their product under cost, while others bust their budget? Why do some deliver ahead of schedule, while others experience endless delays? Which products work better—the quick and thrifty or the slow and expensive?

“Christopher Othen provides an accessible introduction into this neglected aspect of the Spanish Civil War” The Irish Times (Book of the Day) “Othen is a clear and thoughtful guide to this odd aspect of the war and commendably avoids editorialising.” The Tablet “This well written book tells the story of the foreign troops who fought on Franco’s side in the Spanish Civil War.

God in Captivity by Tanya Erzen

Her Say by Jackie Clark

In 2013, Jackie Clark launched The Aunties, a grassroots charity helping women to rebuild their lives after a period of trauma. She quit her job, turning her back on her comfortable life, to focus on The Aunties full-time, becoming Aunty in Charge and assisting hundreds of women with material needs and emotional support.

Inside the Flame by Christina Waters

Inside the Flame invites readers to unplug their computers, cell phones, and televisions and plunge back into overlooked nooks and crannies of everyday experience. We’ve lost touch with the richness of the tangible and with it our reverence for the physical world.

From the bestselling author of With the End in Mind, a book about the hardest conversations we have in life and how to do them right – honestly and without regret. A child coming out to their parent. A family losing someone to terminal illness. A friend noticing the first signs of someone’s dementia. A career’s advisor encouraging a teenager to pursue their interests and stay out of trouble.

The bestselling author of The Ruthless Elimination of Hurry equips readers to recognize and resist the lies that seek to rob them of peace and freedom. “Live No Lies is brilliant, deep, scriptural, and will equip you to face the enemy and fight.”—Jennie Allen, New York Times bestselling author of Get Out of Your Head We are at war.

“Thirty years ago, I lay in the womb of a woman, conceived in a sexual act of rape, being carried during the prenatal period by an unwilling and rebellious mother, finally bursting from the womb only to be tormented in a family whose members I despised or pitied, and brought into association with people whom I should never have chosen.”

No Cure for Being Human by Kate Bowler

The bestselling author of Everything Happens for a Reason (And Other Lies I’ve Loved) asks, how do you move forward with a life you didn’t choose? “Kate Bowler is the only one we can trust to tell us the truth.”—Glennon Doyle, author of the #1 New York Times bestseller Untamed It’s hard to give up on the feeling that the life you really want is just out of reach.

Nothing But the Truth by Marie Henein

An intimate and no-holds-barred memoir by Canada’s top defence lawyer, Nothing But the Truth weaves Marie Henein’s personal story with her strongly held views on society’s most pressing issues, legal and otherwise.

Palaces of Revolution by Simon Thurley

The story of the Stuart dynasty is a breathless soap opera played out in just a hundred years in an array of buildings that span Europe from Scotland, via Denmark, Holland and Spain to England.

What if we’re living inside a black hole? What if we’ve already found extraterrestrial life? What if the dinosaurs died in a nuclear war? What if Jesus Christ was actually a mushroom? In Psychedelic Apes, bestselling author Alex Boese will delve into the curious scientific subculture of weird theories.

Go beyond surviving to reclaim your sexual self. If you have experienced sexual abuse, assault, harassment, or rape, you may feel disconnected from your sexual self—even if you’ve overcome the initial trauma of your experience. You are a survivor; but surviving is just the beginning. This book explores what comes next.

Redesign Your Mind by Eric Maisel

“Applying the metaphor of a complete ‘home rehab’ to the mind, [Redesign Your Mind] presents an engaging series of visualization techniques.” —Publishers Weekly Your mind is like a room that is yours to redesign—a space that you can declutter, air out, furnish, decorate, and turn into a truly congenial place.

The Audacity by Katherine Ryan

From the star of the hit Netflix series The Duchess comes a brilliantly funny, fiercely honest, and dangerously astute handbook of life instruction. ‘I’ve come to accept that being audacious is a gift I can’t escape’ People ‘know’ my on-stage comedy persona or my scripted ballsy characters and wrongly assume that at home, I must stomp around all day in designer dresses eviscerating those who dare to cross my path and denouncing the existence of men in general.

The Book of Massage by Lucinda Liddell

Even people we think are our friends will deny and betray us. Are they bad people, or just don’t do enough, or people with good intentions but acting in ignorance? Or are they basically decent people who, when put to the test, fail because of their weak faith?

The Magic Mindset by Preeti Shenoy

Sometimes, it’s not easy to find the silver lining. While positivity is about looking at the bright side of things, the magic mindset embraces and accepts that it is not always possible to do so.

The Self-Care Year by Alison Davies

The Self-Care Year reveals how to re-connect with your body and mind and engage with your surroundings, how to slow down, live in tune with the seasons, and pay attention to the present moment.

The Spirit of Zen by Solala Towler

Zen is probably the most well known yet misunderstood version of Buddhism in the West. The Spirit of Zen presents the most basic principles and practices of Zen in a simple yet authentic fashion. The Spirit of Zen guides you down the path to enlightenment with stories, history and practical guidance from the masters of Zen.

No one likes being pressured into buying. Over decades of being marketed at, pitched to and lied to, we are all resistant to being sold. Our defences are up. We are sceptical. We pull away. We don’t believe the promises being made and don’t trust the person making them. But we do trust our own ideas implicitly.

The Witch’s Book of Shadows by Jason Mankey

Discover the fascinating history, tradition, and modern uses of the witch’s Book of Shadows. From creating, buying, and finding a Book of Shadows to its place in ritual, this guide provides everything you need to use this important and cherished tool in your practice. A great Book of Shadows is a chart that tells the Witch where she’s been and where’s she’s going; it’s a personal guidebook for exploring the magic and mysteries of Witchcraft.

Think Yourself Thin by JJ Smith

The author of the #1 New York Times bestseller 10-Day Green Smoothie Cleanse returns with this revolutionary guidebook filled with the crucial mental strategies that will provide the missing piece in your weight loss journey once and for all.

This Is Your Destiny by Aliza Kelly

Your best life is written in the stars You may know what astrology is – but what does it actually do? Why is it so effective, and how can it be used as a tool for manifestation? These are the questions Aliza Kelly answers in This Is Your Destiny.

You Were Made for This Moment by Max Lucado

Are you weary from your challenges, wounded by your battles, or worried your world is spinning out of control? Have the struggles pilfered the life out of your life? If so, the book of Esther brings welcome news: Relief will come! Queen Esther concealed her Jewish identity. As far as anyone knew, she was pure Persian.