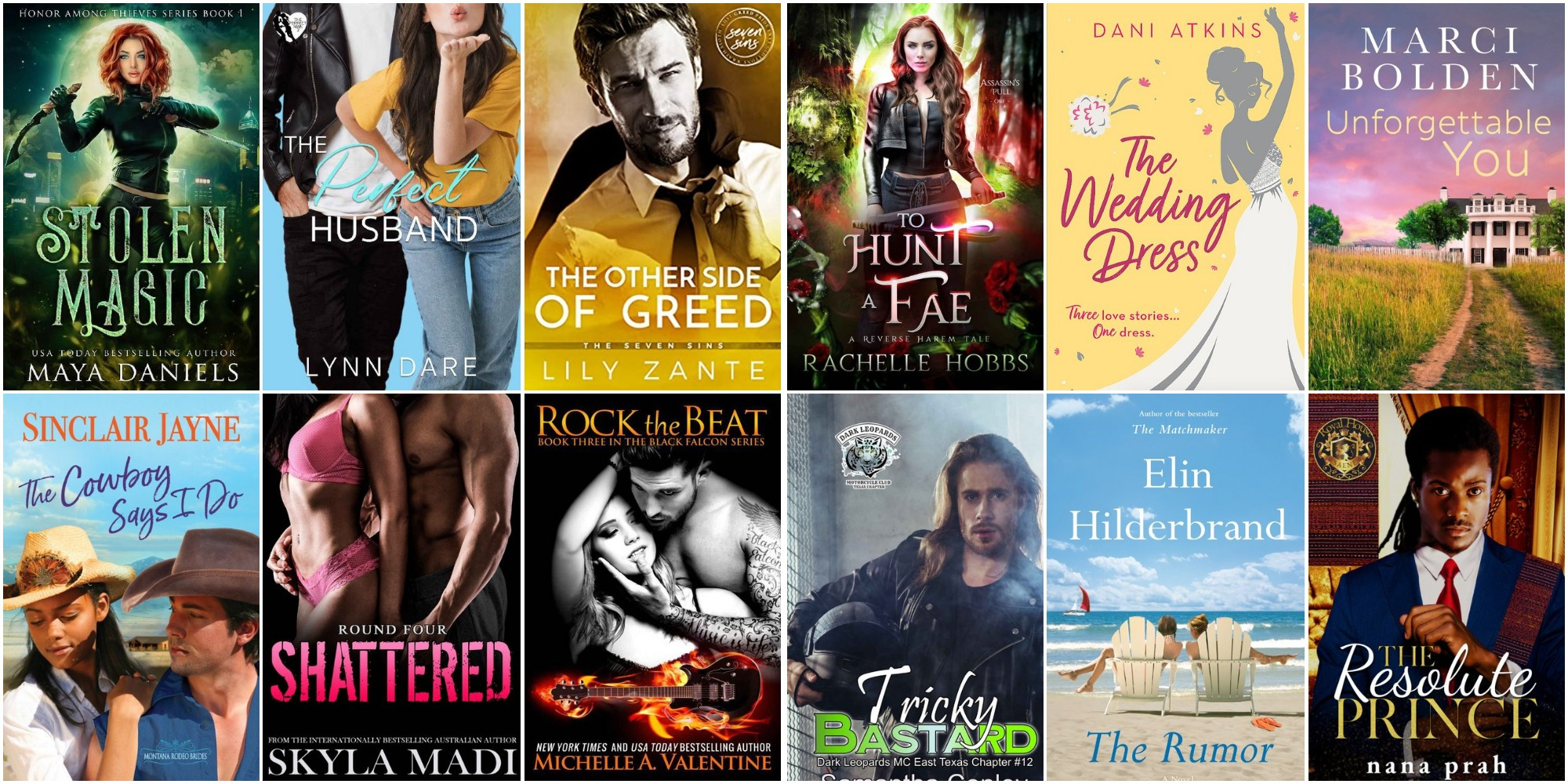 Whether you get all hot and bothered over historical romance that takes you back to fluttering hearts of yore, paranormal romance that proves you don’t need to have flesh and blood to heat things up, heartwarming tales that explore the tender side of love, and of course sexy stories you might not want to read on public transit, we’ve got books to make you blush. And if you don’t think you’re interested in romance, give this list a look anyway. The romance genre has a lot to offer beyond the bodice-rippers you may have seen hiding in your mom’s bedside table growing up.

Rock the Beat by Michelle A. Valentine

New York Times and USA Today Best-Selling Series Twenty-year-old Holly Pearson never dreamed that while working at her father’s motocross track she’d run into the walking, talking definition of trouble in a sexy, tattooed package—Trip Douglas, the man sent to evaluate the track for a possible investment opportunity.

The truth will ruin his empire. A lie will destroy her. Thief by night and witch by birthright, candle maker Alaska McCullough has perfected the art of stealing by using magic. Until she takes something she never should’ve touched. The object should not have existed, yet it’s putting her life and reputation on the line. Now she lives on borrowed time…unless she can find a way to give it back before it’s too late.

Unforgettable You by Marci Bolden

After losing her young husband, Carrie Gable buries her grief at historic the Gable Inn, the now defunct bed-and-breakfast where her mother-in-law lives and works. Before long, Doreen’s medical bills drive Carrie to make an impossible choice: open for business and risk Doreen’s health and safety or lose the generations-old Inn.

My name is Andrew ’Trick’ Starett. I’m a Dark Leopards MC nomad. As a fugitive recovery agent, I’ve travelled all over, but my love of gambling has me calling Las Vegas home. When Wraith, president of the East Texas Chapter, asked me to help him track down a missing woman close to the club, I never thought I’d be searching for my mate. The brothers warned me that she was trouble, but it looks like it found her. Discovering she’s entangled with the local mob will have me pulling out all my tricks to save her hide.

To Hunt a Fae by Rachelle Hobbs

The Fae king’s rules aren’t made to be broken… To live in the human world, Fae must adhere to a certain code. They don’t, they die—and it’s up to my people, the Order of Assassins, to carry out the sentence. The rules are simple: Don’t reveal your true self to humans.

The Wedding Dress by Dani Atkins

Three women. Three love stories. One dress. The new heartwarming and uplifting romance from award-winning romance writer Dani Atkins. Suzanne is engaged to be married to the man of her dreams – except the lead up to her wedding is beginning to feel more like a nightmare.

The Rumor by Elin Hilderbrand

Madeline King and Grace Pancik are best friends and the envy of Nantucket for their perfect marriages, their beautiful kids, their Sunday night double dates with their devoted husbands. But this summer, something’s changed, and if there’s anything Nantucket likes better than cocktails on the beach at sunset, it’s a good rumor.

The Resolute Prince by Nana Prah

As head of palace security Prince Zareb Saene lives to protect the Royal House of Saene. Between his work and coaching competitive fencing, he has no time for relationships. That is, until he meets the beautiful and headstrong Malika Ahvanti. She scales his carefully constructed walls and lands squarely in his heart.

The Perfect Husband by Lynn Dare

Welcome to Cape Kismet, where the neighbors are nosy, the bookstores offer an escape, and epic romances abound. A little mistake? Try huge. Being the screw up of the family is a talent, one I excel at. I’m Cecilia Cabot, and I’m a teacher. Sounds pretty tame, right? Except I’m also a serial dater. Not by design, really.

The Other Side of Greed by Lily Zante

Billionaire Brandon Hawks stands to make millions from a lucrative property deal. He infiltrates a nonprofits organization under the guise of wanting to help, but he’s really after the plot of land. Unfortunately, one thing stands in his way.

The Cowboy Says I Do by Sinclair Jayne

He needs her to say I do… When professional rodeo cowboy Beck Ballantyne returns home to Marietta, Montana, nothing goes as planned. His granddad, flanked by his three determined daughters, announces his plan to sell his legacy ranch after the rodeo.

Tension. Aggression. Betrayal. Does Jai and his crew have what it takes to bring Joel’s girl back from hell? Or will their attempt be thwarted by Skull and the men he controls? Find out in the thrilling fourth installment of Skyla Madi’s BESTSELLING Broken series! **

Fresh out of college, Olivia Monroe has a new apartment and a new job living in San Francisco with her best friend. Hoping for a fresh start drama free, Olivia has a chance encounter with an attractive stranger who turns out to be more than she bargained for. Now her fresh start is becoming more precarious by the day as she navigates work, love, and a secret she intends to keep.

After Life by Aria Storm

Death holds no rest for the weary Demigoddess. At least I think this was death I passed through? My mother Lady Clare formerly of the Irish Vampyr Tribe came to me. My powers emerging might hold the only possible restitution to several lives hanging in the balance. Even after all I have endured, all that has been sacrificed, still I fight on. I must fight my way beyond the limits of my original self.

Blissful Awakenings by Penny May

Courtney never dreamed she’d win the Pleasure Temple contest…or that she’d fall for its billionaire owner, Bo Ryans. Unlucky in love and life, Courtney does something completely out of character—she enters to win a naughty prize.

Reborn in Moonlight by Anwen Anding

I thought my fated mate loved me. But he only ever loved power. That’s how I found myself bound to a sacrificial altar with his knife in my chest. I used to be ordinary, powerless Lily Aster, until my shifter heritage awakens on my eighteenth birthday—and sends me into a powerful alpha’s arms.

One More Sip by Gia Kim

Can a shattered heart learn to love again? Kailey For one glorious year, Kailey Wright had the life she always dreamed of. Newly married to the love of her life, the two were working to build a beautiful future… when tragedy struck. Widowed. Alone.

Not Alone by Amber Nation

Emmalynne Morgan thought that getting married to her High School sweetheart and starting a family was all she wanted in life. Everything was perfect until circumstances change and devastating blows occur.

Wren I always knew darkness crept through this city, like a shadow, it never really goes away, always watching, always waiting. People sin and people kill, it’s a way of life. I just never expected to be thrown into the middle of a war I had no hope of surviving. Alexander Silver is as brutal as he is beautiful. A Devil in disguise.

Learning to Love by Trinity Wood

King of Masters by Brynn Ford

He’s a king without a queen. She’s a proudly independent woman. He’s going to make her the reluctant queen of his criminal empire…whether she wants it or not. “One click this one today I promise you won’t be disappointed.

Hunting Her Wolves by Julia Summers

Like her father, Fey is supposed to hunt shifters. At least that’s what she thought…  But when her father goes missing in an isolated town up north, she goes looking for him and meets four of the shifting “animals” her father had been preparing her to kill her entire life. And these men… she can hardly believe they’re actual shifters. She didn’t know that they could be so beautiful.  Or kind.

When danger threatens her, he will be her shield FURY His club is his home; brotherhood is the family he needs. Former ex-Army Sam “Fury” Young is the president of the Kings of Justice MC. His task? Help his brothers and eliminate drugs from Sacramento. And stop the fucking Riders, the MC rival, outlaw bikers that threaten his club and the people in the city he loves. His life? He is broken.

What if the person you owe your life to literally wants it in return for saving you? In Egyptian mythology, Ra was the Sun God. After millions of rotations of the Earth, generations have come and gone, but the lineage of Ra still reigns.

Run away to the countryside with the latest romantic comedy from the bestselling author of Rosie’s Travelling tea Shop! A fresh start brings a second chance at love…

As Arthur Bremerton, Lord Mather, hurries to the opening session of Parliament, he is incensed to find his way blocked by a boisterous group protesting for women’s rights.

My lyrics are love letters, stating every detail I love about her, recalling every unforgettable memory we made together. And now she’s gone. I messed it up and she left. She won’t come back another time, I won’t get another chance, we’re over. All hope is lost.

Ivy never expects to feel at home in the Nightfall Realm, but a lot of things in her world have taken a sudden turn. As Ivy’s world begins to crumble around her, she learns that the world she grew up fearing might be the only one to save her. It isn’t until the vampire of all vampires, Carter Voss, swears to protect her that things get interesting.

“A breath of fresh air romance that cuts right through the haze. Full of fun, longing, heat and hope.” – NYT Bestseller, Tessa Bailey “I so love this book! I A new mega-treasure for my keeper shelf!” NYT Bestseller, Annika Martin “I adored this book. It is warm, funny, sexy, and unflinchingly human.” USA Today bestseller, Andie J. Christopher It’s been a long, lonely winter for Bethany Myers.

A Bride for McKenzie by Cheryl Wright

Sheriff McKenzie Dunn doesn’t need a wife. He’s doing just fine without one. After seeing the happiness of his friend who sent for a mail order bride, McKenzie decides to send for one himself. After all, it would enhance his standing in the community to be married.