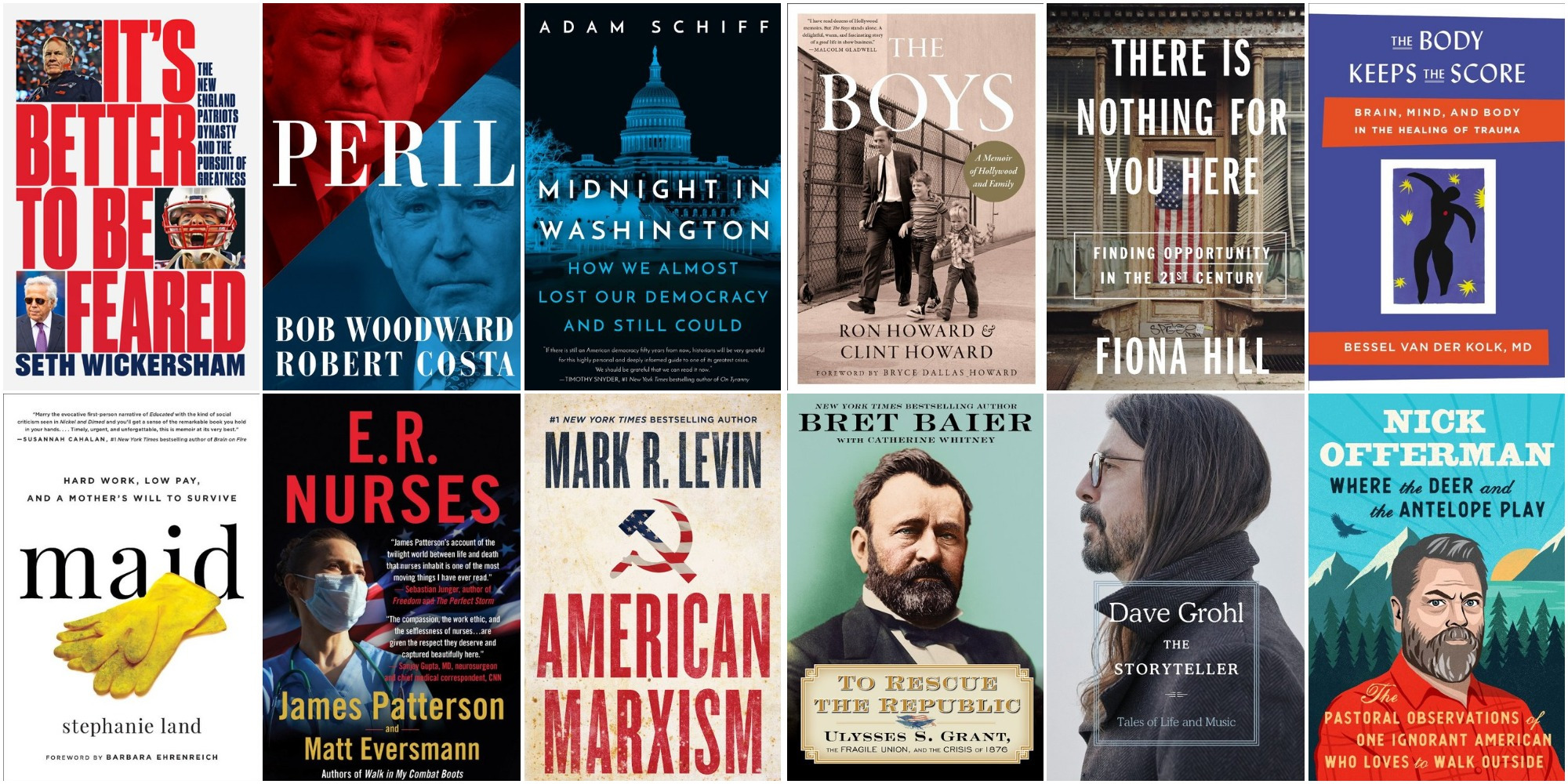 Authoritatively ranked lists of books sold in the United States, sorted by format and genre. In this case we assorted The New York Times Best Sellers Non-Fiction – October 30, 2021.

The six-time #1 New York Times bestselling author, Fox News star, and radio host Mark R. Levin explains how the dangers he warned against in the “timely yet timeless” (David Limbaugh, author of Jesus Is Risen) bestseller Liberty and Tyranny have come to pass.

James Patterson and Matt Eversmann, #1 bestselling coauthors of Walk in My Combat Boots, powerfully present the frontline heroes who work to save our lives every day: E.R. Nurses. “The compassion, the work ethic, and the selflessness of nurses … are given the respect they deserve and captured beautifully here.”

IT’S BETTER TO BE FEARED by Seth Wickersham

With new reporting on Tom Brady’s run to the Super Bowl with the Tampa Bay Buccaneers. The explosive, long-awaited account of the making of the greatest dynasty in football history—from the acclaimed ESPN reporter who has been there from the very beginning.

Evicted meets Nickel and Dimed in Stephanie Land’s memoir about working as a maid, a beautiful and gritty exploration of poverty in America. Includes a foreword by Barbara Ehrenreich.

MIDNIGHT IN WASHINGTON by Adam Schiff

From the congressman who led the first impeachment of Donald J. Trump, the vital inside account of American democracy in its darkest hour, and a warning that the forces of autocracy unleashed by Trump remain as potent as ever.

The transition from President Donald J. Trump to President Joseph R. Biden Jr. stands as one of the most dangerous periods in American history. But as # 1 internationally bestselling author Bob Woodward and acclaimed reporter Robert Costa reveal for the first time, it was far more than just a domestic political crisis.

From award-winning actor and food obsessiveStanley Tucci comes an intimate and charming memoir of life in and out of the kitchen. Before Stanley Tucci became a household name with The Devil Wears Prada, The Hunger Games, and the perfect Negroni, he grew up in an Italian American family that spent every night around the table.

THE BODY KEEPS THE SCORE by Bessel van der Kolk

#1 New York Times bestseller “Essential reading for anyone interested in understanding and treating traumatic stress and the scope of its impact on society.” —Alexander McFarlane, Director of the Centre for Traumatic Stress Studies A pioneering researcher transforms our understanding of trauma and offers a bold new paradigm for healing in this New York Times bestseller Trauma is a fact of life.

THE BOYS by Ron Howard and Clint Howard

“This extraordinary book is not only a chronicle of Ron’s and Clint’s early careers and their wild adventures, but also a primer on so many topics—how an actor prepares, how to survive as a kid working in Hollywood, and how to be the best parents in the world!

THE STORYTELLER by Dave Grohl

So, I’ve written a book. Having entertained the idea for years, and even offered a few questionable opportunities (“It’s a piece of cake! Just do 4 hours of interviews, find someone else to write it, put your face on the cover, and voila!”) I have decided to write these stories just as I have always done, in my own hand.

THERE IS NOTHING FOR YOU HERE by Fiona Hill

“As a memoir this is hard to put down; if you are seeking a better American future you should pick it up.”—Timothy Snyder, New York Times best-selling author of On Tyranny A celebrated foreign policy expert and key impeachment witness reveals how declining opportunity has set America on the grim path of modern Russia—and draws on her personal journey out of poverty, and her unique perspectives as an historian and policy maker, to show how we can return hope to our forgotten places. Fiona Hill grew up in a world of terminal decay.

TO RESCUE THE REPUBLIC by Bret Baier with Catherine Whitney

The #1 bestselling author and Fox News Channel’s Chief Political Anchor illuminates the heroic life of Ulysses S. Grant “To Rescue the Republic is narrative history at its absolute finest.

WHERE THE DEER AND THE ANTELOPE PLAY by Nick Offerman

A humorous and rousing set of literal and figurative sojourns as well as a mission statement about comprehending, protecting, and truly experiencing the outdoors, fueled by three journeys undertaken by actor, humorist, and New York Times bestselling author Nick Offerman Nick Offerman has always felt a particular affection for the Land of the Free—not just for the people and their purported ideals but to the actual land itself: the bedrock, the topsoil, and everything in between that generates the health of your local watershed.