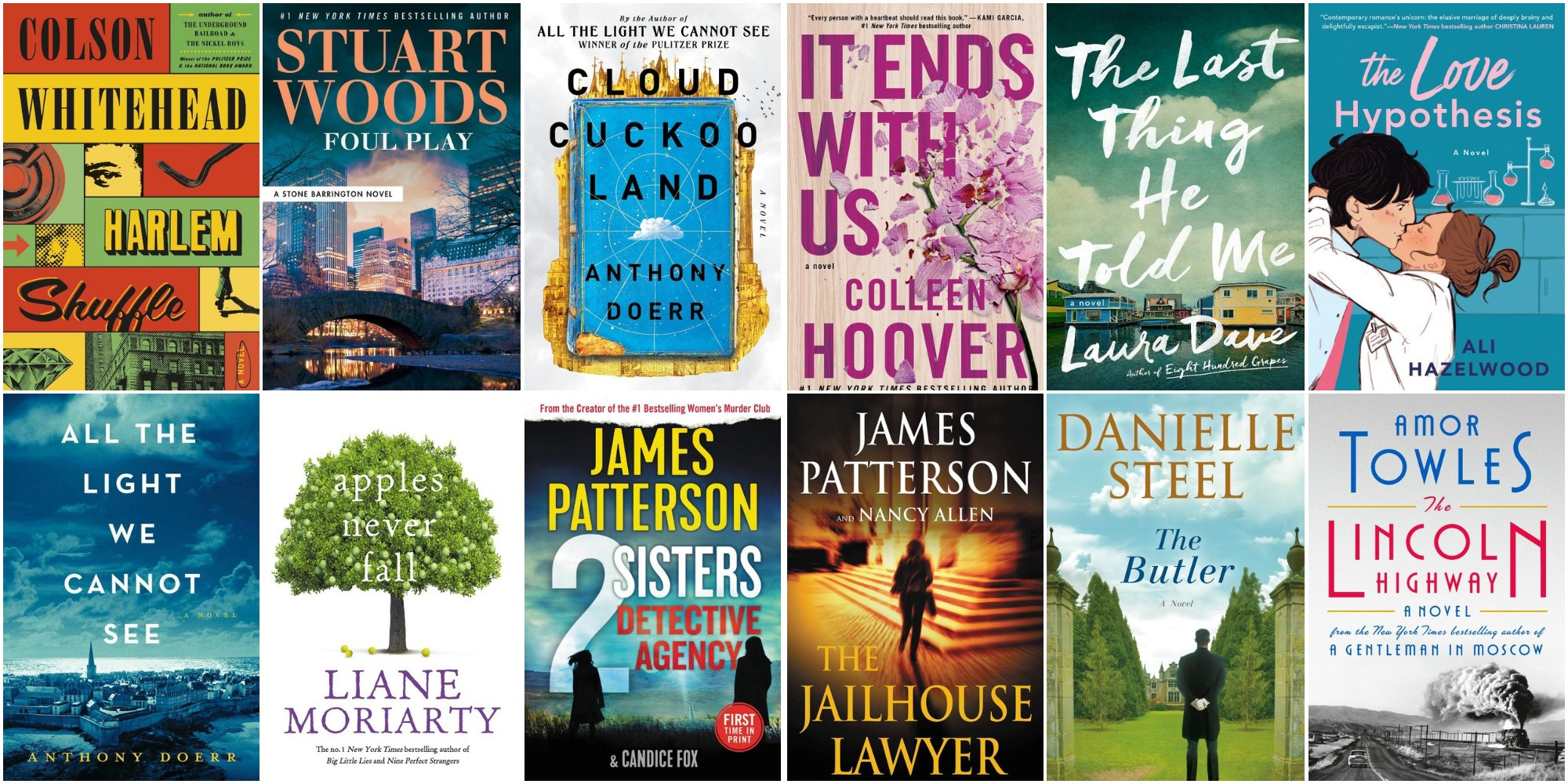 Authoritatively ranked lists of books sold in the United States, sorted by format and genre. In this case we assorted The New York Times Best Sellers Fiction – October 24, 2021.

From the world’s #1 bestselling author comes a thrilling new standalone novel where a detective duo of sisters finds themselves in the crosshairs of a dangerous and lawless group. Attorney Rhonda Bird returns home after a long estrangement when she learns her father has died. There she makes two important discoveries: her father stopped being an accountant and had opened up a private detective agency, and she has a teenage half sister named Baby.

All the Light We Cannot See by Anthony Doerr

From the highly acclaimed, multiple award-winning Anthony Doerr, a stunningly ambitious and beautiful novel about a blind French girl and a German boy whose paths collide in occupied France as both try to survive the devastation of World War II. Marie-Laure lives with her father in Paris near the Museum of Natural History, where he works as the master of its thousands of locks.

From #1 New York Times bestselling author Liane Moriarty comes a novel that looks at marriage, siblings, and how the people we love the most can hurt us the deepest in Apples Never Fall. The Delaney family love one another dearly—it’s just that sometimes they want to murder each other . . . If your mother was missing, would you tell the police? Even if the most obvious suspect was your father?This is the dilemma facing the four grown Delaney siblings.

From the Pulitzer Prize–winning author of All the Light We Cannot See, perhaps the most bestselling and beloved literary fiction of our time, comes a triumph of imagination and compassion, a soaring novel about children on the cusp of adulthood in a broken world, who find resilience, hope, and story.

It’s December 23, 1971, and the Hildebrandt family is at a crossroads. The patriarch, Russ, the associate pastor of a suburban Chicago church, is poised to break free of a marriage he finds joyless— unless his brilliant and unstable wife, Marion, breaks free of it first.

From two-time Pulitzer Prize-winning author Colson Whitehead, a gloriously entertaining novel of heists, shakedowns, and rip-offs set in Harlem in the 1960s. “Ray Carney was only slightly bent when it came to being crooked…” To his customers and neighbors on 125th street, Carney is an upstanding salesman of reasonably priced furniture, making a decent life for himself and his family.

It Ends With Us by Colleen Hoover

The Butler by Danielle Steel

Two different worlds and two very different lives collide in Paris in this captivating novel by Danielle Steel. Joachim von Hartmann was born and raised in Buenos Aires by his loving German mother, inseparable from his identical twin.

The Jailhouse Lawyer by James Patterson and Nancy Allen

From James Patterson, the world’s #1 bestselling author: a young lawyer takes on the judge who is destroying her hometown—and ends up in jail herself. In picture-perfect Erva, Alabama, the most serious crimes are misdemeanors. Speeding tickets. Shoplifting. Contempt of court. Then why is the jail so crowded? And why are so few prisoners released? There’s only one place to learn the truth behind these incriminating secrets. Sometimes the best education a lawyer can get is a short stretch of hard time.

The Last Thing He Told Me by Laura Dave

From internationally bestselling author Laura Dave comes a riveting new suspense novel about how one woman must learn the truth of her husband’s disappearance—no matter the cost. We all have stories we never tell. Before Owen Michaels disappears, he manages to smuggle a note to his beloved wife of one year: Protect her.

The Lincoln Highway by Amor Towles

“[T]ransporting . . . a rollicking cross-country adventure, rife with unforgettable characters, vivid scenery and suspense that will keep readers flying through the pages.” —TIME “An absolute beauty of a book. Every character is a gem, the many locations spring to vivid life, the book is an intricate and moving exploration of journeys and the infinite unexpected turns they can take—and somehow Towles makes it all seem effortless.

The Love Hypothesis by Ali Hazelwood

The Instant New York Times Bestseller! As seen on THE VIEW! A BuzzFeed Best Summer Read of 2021 When a fake relationship between scientists meets the irresistible force of attraction, it throws one woman’s carefully calculated theories on love into chaos.

The Seven Husbands of Evelyn Hugo by Taylor Jenkins Reid

NEW YORK TIMES BESTSELLER “If you’ re looking for a book to take on holiday this summer, The Seven Husbands of Evelyn Hugo has got all the glitz and glamour to make it a perfect beach read.” —Bustle From the New York Times bestselling author of Daisy Jones & the Six—an entrancing and “wildly addictive journey of a reclusive Hollywood starlet” (PopSugar) as she reflects on her relentless rise to the top and the risks she took, the loves she lost, and the long-held secrets the public could never imagine. Aging and reclusive Hollywood movie icon Evelyn Hugo is finally ready to tell the truth about her glamorous and scandalous life.

The Wish by Nicholas Sparks

From the author of The Longest Ride and The Return comes a novel about the enduring legacy of first love, and the decisions that haunt us forever. 1996 was the year that changed everything for Maggie Dawes.